Wine Talk: Reaching for the stars

Fewer than 300 people worldwide can be called a Master of Wine, and they are accorded the utmost respect.

By ADAM MONTEFIORE
Eran Pick
(photo credit: Courtesy)
Advertisement
There is a group of people regarded with absolute reverence in the wine trade. These are the Masters of Wine. They are an elitist small group of people who are, quite frankly in wine terms, on a pedestal, a few steps above anyone else. To have the initials MW after your name means something in our business and garners the utmost respect.Just think how many people there are in the wine trade in Israel and how many wine lovers there are. Multiply that by the number of people in the wine trade in all the wineproducing countries and all the wine lovers worldwide.Out of all these potential Masters of Wine, fewer than 300 people hold this prestigious and rare distinction.In Israel and elsewhere, there are courses that blur the names to confuse and impress. There are cellar master courses. There was even someone who came back from a course abroad pronouncing that he was a Wine Master.However, no one should be bounced into giving undue credit by a similarity in names. It is the Masters of Wine who have reached the pinnacle, and the initials MW should not be confused with any others.The Institute of Masters of Wine was founded in London in 1955 by the Worshipful Company of Vintners. It is a nonprofit organization established “to promote knowledge, understanding and appreciation and to uphold the highest standards.” The only people able to apply for the MW program are those who have a minimum qualification of a diploma from the Wine & Spirits Education Trust, and they must be interviewed and mentored by an existing MW.The first female Master of Wine to pass the examination was Sarah Morphew Stephen in 1970. Until 1983, the examinations were open only to those from the British wine trade. In 1984 Jancis Robinson became the first MW not to be from the trade. She remains arguably the most famous of all Masters of Wine, writing her wine column in the Financial Times, maintaining her website (www.jancisrobinson.com) and co-authoring the World Atlas of Wine, a book in every wine lover’s library. Her incredible latest works, Wine Grapes and The Oxford Companion to Wine, are arguably the most scholarly wine books ever written. They should be in every wine professional’s library. Yet those who saw her on her television wine programs, such as Wine Course, will have seen someone with a gift of making the complicated world of wine accessible to anyone and everyone. It is a rare talent to excel at both ends of the spectrum.In 1988, Michael Hill Smith from Australia became the first MW from outside the UK.In 1990 Joel Butler and Tim Hanni became the first MWs from the US. The first Masters of Wine from Asia (from Hong Kong and Singapore) passed their exams in 2008. One of them, Jennie Cho Lee, visited Israel a year or two ago for a vertical tasting (i.e., surveying a series of wines based on vintage years) hosted by Domaine du Castel.Another Master of Wine who came to Israel recently was Joel Butler MW. This resulted in a splendid newly published book about our region. Entitled Divine Vintage, it focuses on the wines of the Eastern Mediterranean from Genesis until today. It provides a fascinating insight into wine from biblical times through to the recent quality revival in Israel and elsewhere.THERE ARE three stages to the Master of Wine program – the theory, practical and the dissertation.In the theoretical part, candidates are examined in four three-hour papers covering not only viticulture and winemaking but also the business of wine. The practical part consists of three different tastings of 12 wines each. The tastings are blind, and the individual wines must be evaluated and described. Not so easy. Try it sometime. Finally, the candidates have to write a 10,000-word dissertation on an approved topic. The process is likely to take a number of years, after which there is no guarantee of success.Today there are only 297 MWs from 23 countries. Of these, 87 are women. Despite becoming international, there are still only 75 MWs from outside the UK. However, there is not yet one from Israel or anywhere else among our neighboring countries.The nearest is Greece, which boasts one Master of Wine, Konstantinos Lazarakis. He is a wine consultant who has written the most comprehensive wine book about an Eastern Med wine country. The Wines of Greece was published by Mitchell Beazley.Many will say it is very hard to become a Master of Wine from Israel because even the top wine people here just don’t have the daily exposure to different wines from even the more obscure wine-producing countries, which is so necessary. It is obviously easier to study and taste in a more cosmopolitan market like the UK or the East Coast of the US.However, it is praiseworthy that two of our finest are contemplating the Master of Wine summit. Fortunately for their prospects, these are two of the outstanding and most worldly winemakers in Israel. They are Eran Pick and Ido Lewinsohn. 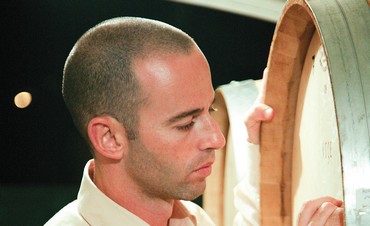 Ido LewinsohnPick is the winemaker of Tzora Vineyards, one of the fastest improving wineries in Israel.He graduated in enology at the University of California at Davis and gained valuable work experience in wine regions as varied as Napa Valley, Sonoma, the Barossa Valley and Bordeaux.Tzora is a winery that is engaged in the search for an Israeli terroir, believing that a sense of place is the crucial aspect in the character of the final wines. Tzora produces some world-class wines such as the exquisitely balanced Neveh Ilan white, which is a Chardonnay, and the truly fine Misty Hills, one of the highest quality and most underrated wines in Israel.Pick is a modest type with a studious academic demeanor, whose quiet pursuit of excellence and absolute attention to detail are managing to put Tzora wines and the Judean Hills and Foothills wine region on the quality wine map.Ido Lewinsohn graduated from the University of Milan and has worked at Margalit Winery in Israel and has experience in the Languedoc, Rhone Valley and Tasmania.He is now a pioneer of the Mediterranean-style varieties at Recanati Winery, where he works as a winemaker and at his father’s garagiste winery in Hod Hasharon. The focus on Mediterranean varieties such as Carignan, Petite Sirah and Shiraz/ Syrah is leading many to reconsider which grape varieties are truly suitable to be grown in Israel.The Recanati Wild Vine Carignan, Syrah Viognier and Petite Sirah Zinfandel blend are excellent examples of Mediterranean style wines, as is the Lewinsohn Garage de Papa Red 2009, which is a blend of Shiraz, Carignan and Petite Sirah. However, it is not just the Med varieties with which he excels as the Recanati Special Reserve and Garage de Papa Blanc, a Chardonnay illustrate. They are two of the outstanding wines of their type in Israel.Lewinsohn is the more Israeli of the two, with the brash self-confidence of youth, but he backs it up by making some really fine wines. Impressively, both are prepared to give something back to the industry. Pick wrote an impressively detailed study of the Judean Hills and Foothills wine region, which remains the most comprehensive study of any appellation in Israel.Lewinsohn is the professional manager of a wine course for small winery winemakers, which has been held annually at Ariel University. It runs for a full academic year and is always oversubscribed.These are two of the finest young winemakers in Israel, and they are both contributing to the quality advance of Israeli wines in a very significant way. What a triumph it would be if either of them was to become Israel’s first Master of Wine! Certainly, if nothing else, their drive and ambition may well encourage others here to reach for the stars.