Battle for the music

Amid a flurry of cancellations, Placebo land in Tel Aviv to give local fans a welcome respite - and a uniquely Israeli festival experience.

By YIFA YAAKOV
JUNE 7, 2010 00:47
placebo pink hair 2 311
(photo credit: Yifa Yaakov)
Advertisement
“We're Placebo, from London, England, and we had the courage to get on a plane,” was Brian Molko’s way of introducing his band as he took the stage in Tel Aviv on Saturday. He later explained that he hated flying in general, but the crowd of thousands was already cheering him on, one proud soul waving an Israeli flag.Placebo performed in Israel as part of the PicNic festival, originally scheduled to include Israeli New York-based duo Hank & Cupcakes, UK indie rockers The Klaxons and audio-visual outfit Gorillaz Sound System. The two latter acts canceled their performances less than two days ahead of the festival, possibly in the aftermath of Monday’s flotilla fiasco. They were quickly replaced by funky Israeli electronic outfit J.Viewz and veteran rocker Rami Fortis. (Matters took a turn for the worse on Sunday, when The Pixies announced that they, too, would not perform in Tel Aviv as planned.)RELATED:
Comment: Make the boycott go up in Pixie dust
From a whisper to a screamHank & Cupcakes proved to be the perfect openers, sweet but tangy, with tunes that could become big indie hits in time. Their music evokes electro-pop groups like CSS and MGMT, but the guitar melodies sound more like Placebo’s trashy glam.Although allowances have to be made for the difficult last-minute improvisation – Jonathan Dagan of J.Viewz aptly described event producer Shuki Weiss as having “the worst job in the Middle East” – J.Viewz did not seem like an appropriate choice for PicNic. The 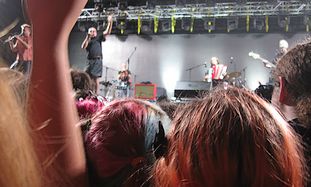 group demonstrated a great brassy groove and performed an excellent Israeli-style reggae cover version of Nina Simone’s ‘Sea Lion Woman,’ but its music can by no stretch of the imagination be considered something the average Placebo fan would enjoy as a warm-up act.‘Punk godfather’ Fortis, meanwhile, was quick to rile up the crowd – just what the doctor ordered. Dozens sang along to his track ‘Na’alayim,’ with its scathing political criticism, proving that though the cancellations were mostly forgotten, this week’s incidents were not.To Placebo and their fans, it didn’t matter.Placebo – founded in London in 1994 by frontman-songwriter-guitarist Molko and bassist-guitarist Stefan Olsdal, former schoolmates at the American International School of Luxembourg – have often been described as pretentious. Molko’s songs are invariably dramatic, with supertight hooks and melodies; his lyrics usually allude to substance abuse and other forms of depravity and deviance, though listeners over the age of 15 will immediately recognize that the band is about as violent and threatening as its namesake. Meaning, it’s pretty harmless, and it’s probably pretend. 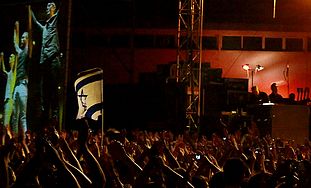 But surprisingly, there were no pretenses in place on Saturday night. There was nothing fake about the first-rate show, nor about Placebo’s admirable willingness to go through with it without caring that in the eyes of some, they were taking a political stand merely by performing (making them more alternative, ironically, than Kim Deal and Frank Black). Molko seemed earnest and somewhat enigmatic, addressing the crowd with warmth, wit and a bit of Hebrew – a far cry from his notorious persona of glitzy outfits, half-baked gender confusion, tormented nasal whines and innuendo of Stone Age sophistication. Placebo, refreshingly, don’t dwell on the past. For better or worse, they reinvent and recycle themselves without looking back. Armed with Californian drummer Steve Forrest, who replaced founding band member Steve Hewitt, they recorded their sixth studio album, Battle for the Sun, in 2009. The album marked a divergence – a transformation of sorts – in the band’s career, and its overall positive message (implied by the album’s uncharacteristically upbeat name) was apparent Saturday as Placebo churned out track after track. Here and there a bit of the old in-your-face Placebo shone through, in particular when during one of the very first tracks – ‘Sleeping With Ghosts,’ off the 2003 album of the same name – Molko enunciated the line "fuck the government" and gestured to the crowd meaningfully, eliciting whoops and cheers.The setlist, predictably, was comprised mostly of songs from Battle, with Placebo’s previous effort, Meds, coming in second. Many hits from the band’s first albums – the same songs that catapulted it to popularity over a decade ago – were conspicuously absent.That, too, just didn’t matter. Because Placebo’s show was set up as a true rock show, a festival experience not that different from the great European summer mega-events. The 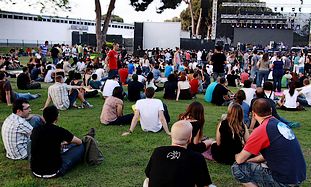 crowd had the power, the unbridled hunger and enthusiasm; they pushed, shoved, jostled, clapped, shouted, chanted energetically, obsessed over discarded drumsticks and guitar picks and released colorful balloons into the cool night air.Some say Placebo’s fan base never ages, only changes every year as teenagers get older and others take their place. And perhaps that’s true. But the large crowd that turned up at the Tel Aviv Exhibition Grounds Saturday was anything but homogeneous. Students, soldiers, high schoolers, adults, guys and gals alike came to see the show. Some may have originally bought their tickets expecting three international acts, but they, too, went along for the ride. High school girls in gothic-inspired outfits and colorful, rebellious hairdos crowded in the front rows, their excitement palpable and contagious. I caught it, too. It took me back to high school, skiving off classes to listen to a borrowed copy of Sleeping With Ghosts back when I thought it was daring and innovative, when I could listen to songs like ‘English Summer Rain’ (with its mighty rhyme “I’m in the basement, you’re in the sky/I’m in the basement, drop on by”) and ‘This Picture’ (featuring a highly original couplet about a “forbidden snowflake” and “angelic fruitcake”) on repeat without suspecting that Molko was putting the Complete Rhyming Dictionary to bad use. Innovation is not Placebo’s strongest suit, though they preceded today’s indie-pop scene – from The Killers to Interpol – by at least a decade. Molko – who sometimes tries to channel David Bowie, though he lacks his role model's finesse and ability to pull off ambiguity – has a solid grasp on rhyme and rhythm, but his lyrics tend to go over the top. Their themes range from laments about social alienation to gory dissections of failed relationships to unsubtle, unconvincing suggestions of sordid activity usually presented in clumsy metaphor form (though on the new album, Molko seems to forego creativity altogether, all but discarding his usual ostentatious vocabulary for inane, hackneyed lines about "cheap and nasty fakes").
In Tel Aviv, however, content didn’t matter. Intent mattered. Music mattered. It was the melodies that made the crowd go wild, the guitar, drums and bass as precise as ticking bombs timed to explode with every chorus. The new songs proved to be great live tracks, in part due to high-powered arrangements positively meant for the stage. ‘The Bitter End,’ a Placebo classic with a powerful pop-punk beat, was one of the highlights of the evening, though its dramatic climax was cut off in the live version. ‘Follow The Cops Back Home,’ off 2006’s Meds, became a heartfelt ballad, with hundreds in the crowd swaying back and forth and singing along. ‘Trigger Happy,’ the first encore, made the fans go wild. “The world is run by clowns with trigger happy hands, but the world is filled with 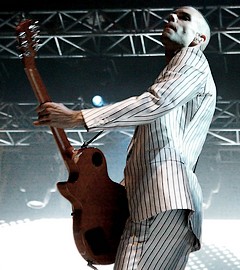 people that we don’t understand,” the crowd sang along with particular zeal, perhaps in light of recent events. “So we’re living in a culture made of death and fear, doesn’t seem the human race will make it through the year.”All three encores were brilliant picks performed brilliantly. ‘Trigger Happy’ was followed by the explosive ‘Infra Red,’ which drove the crowd further into a frenzy; ‘Taste in Men,’ a Sonic Youth and Depeche Mode-inspired track off the band’s third album, Black Market Music, concluded the evening and lent it a flair that was distinctly Placebo – sleazy for appearance’s sake, deliberately provocative, but musically speaking, a direct hit. Placebo came to Tel Aviv despite our everyday reality and gave us a welcome respite from it. In this reviewer’s opinion, it was long overdue.
Advertisement
Subscribe for our daily newsletter