Many things can be said about Jeffrey Lewis, singer-songwriter, anti-folk musician and comic artist extraordinaire – most of all, that he’s full of surprises.

By YIFA YAAKOV
MAY 25, 2010 23:21
The Lewis Brothers 311
(photo credit: Yoni Passa)
Advertisement
Jeffrey and Jack LewisOpening Act: Lail Arad (UK)Uganda pubJerusalem, May 23 Many things can be said about Jeffrey Lewis, singer-songwriter, anti-folk musician and comic artist extraordinaire – most of all, that he’s full of surprises. Lewis, accompanied by his brother Jack (both are Jewish, incidentally), finds himself in Jerusalem’s stifling hole-in-the-corner Uganda pub on a chilly spring evening. The place is as packed as I’ve ever seen it, with dozens of fans queuing way past the front door. It isn’t difficult to admire Jeffrey Lewis: he’s talented to the extreme, witty and endearingly frank. Some know him as a musician, others know him as an artist of comic books and album covers (for rising stars The Mountain Goats and The Cribs, among others); his work is delightful in both capacities. Lewis, like his fellow singer-songwriter Kimya Dawson (with whom he’s collaborated in the past), is often classified as an “anti-folk singer.” Having seen Lewis in action on Sunday night, I now have a much better understanding of what this genre encompasses. It’s reactionary, a reaction to music that’s neither personal nor honest. It’s young and funny and doesn’t take itself too seriously, but it can be intellectual and solemn at times. Most of all, it’s down-to-earth and self-aware and easy to identify with. It also has a great many influences; Lewis’s range from Leonard Cohen to Will Oldham to (I suspect) Bob Dylan, the Sex Pistols‚ Johnny Rotten and The Postal Service. THE OPENING act, London-Israeli songstress Lail Arad, aptly fits the same description. Her voice is melodious, crystal-clear, sometimes humorous, sometimes sultry. “With all your rules, they won’t let you in, so kiss me goodbye – and I’ll send you a postcard from Berlin,” she sings in her first song of the evening, drawing appreciative whoops from the crowd. 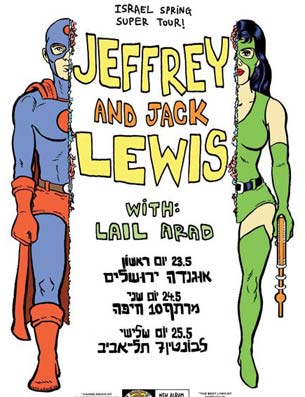 Arad, who lives and works in England and whose debut album Someone New is scheduled for release come autumn, is on par with some of her better-known female European contemporaries. Her tongue-in-cheek lyrics, abundance of girl power and combined Israeli-British chutzpa and vivacity will appeal to fans of Lily Allen, while her use of brass and wind instruments and sentimental interludes may remind some listeners of French-Israeli songstress Yael Naim. Arad proves to be a very charismatic performer, making the crowd cheer, jeer and laugh intermittently with every line. In my own personal favourite of the evening, “Over My Head,” she sings “wake up and download a string quartet/the internet is something I don’t get,” providing a cheeky take on the absurdity of the global village. As the song progresses, Arad adopts a serious demeanor for once and belts out, somewhat forlornly, “so the world is as small as the universe far, and still I don’t know where you are.”One song in particular, about a girl’s search for the perfect man among Spaniards, Italians and men of other nationalities – culminating (of course) in an ill-fated encounter with a cocky Don Juan from Tel Aviv – drives the crowd wild with glee. AFTER SUCH a hot opening act, it’s time for more surprises – and the Lewises don’t fail to deliver. “Cool comics, cool records, cool Jewish people – am I still in Brooklyn or what?” Lewis asks in-between songs. Wit abounds in the lyrics themselves, too – simple and smart. “Love takes as much work as anything else you’re gonna do,” Lewis says-sings, sounding like a lo-fi Baz Luhrmann. He sings of “six billion people taking turns at eating and napping;” synthesizers sound in the background. The brothers play doo-wop rhythms in the spirit of punk as Lewis expresses his “relief to see [he’s] a natural thing.”Lewis interrupts his show midway to share a comic about a Sioux Indianwho leaves the reservation and observes that white people know how to“create, but not to share.” The comic is presented in the form of alarge hand-drawn booklet that’s “wide enough” to reflect the “WildWest.” It’s so large that Lewis has to ask a tall man in the crowd –well-known Israeli guitarist Ram Orion – to hold the projector as heflips the pages. Another comic ends the show, this one a film-noirparody about a P.I., a pretty woman and a saxophone. American culture takes on many forms in Lewis’s songs, many of them setin New York City. “Roll Bus Roll” describes a journey out of 42ndStreet by Greyhound, with a “rolled-up sweatshirt” keeping the windowsoft as the city gets smaller and smaller. “I wasn’t designed to moveso fast, I wasn’t designed to have so much past,” he sings, and wesmile in understanding, soaking in the magic of that chilly Jerusalemevening. The Lewis brothers chose to donate proceeds from their three-show tourof Israel to the Fund For Reconciliation, Tolerance and Peace. They canbe seen this weekend at Barcelona’s Primavera Sound Festival, featuringThe Pixies, Built to Spill, Low, The Fall and our very own Monotonixand Eatliz.
Advertisement
Subscribe for our daily newsletter