By JPOST.COM STAFF
FEBRUARY 1, 2014 14:32
Israeli singers Achinoam Nini (L) and Mira Awad
(photo credit: REUTERS)
Advertisement
Achinoam Nini, the world-renowned singer who has expressed dovish political views, last week turned down a prestigious award from an Israeli recording arts association.The refusal was because of its decision to hand out an award to another well-known performer, Ariel Zilber, with opposite political opinions.Nini – known internationally by her stage name, Noa – and Zilber were both announced as recipients of awards from ACUM, a nonprofit group that seeks to ensure copyright laws protecting artists’ works are respected. Zilber, is expected to receive the lifetime achievement award, while Nini was announced as winner of an award for promoting Israeli music.“I wanted to announce that I have canceled my scheduled appearance at the ACUM awards ceremony for ideological reasons,” the songstress, who has performed before Carnegie Hall and the pope throughout her illustrious career, wrote on her Facebook page. “I have asked that nobody accept the prize on my behalf. In short, delete.”Though Nini did not mention Zilber by name, she has in the past publicly expressed her dislike for the latter’s views on issues of Israeli-Arab relations. 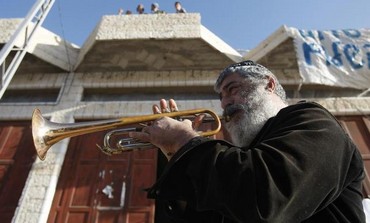 Singer Ariel Zilber is seen outside a settler home in Hebron (Reuters)
(Singer Ariel Zilber performs near a settler home in Hebron. Reuters)Zilber, a 70-year-old pop star who first gained fame as a member of the hit 1970sera rock band Tamouz before launching a successful solo career, has made headlines in recent years less for his singing and more for controversial statements that place him firmly on the Right of the political spectrum.Zilber is known to be sympathetic to the views espoused by Rabbi Meir Kahane, the slain far-right champion of an exclusively Jewish Israel. Nini, meanwhile, is a staunch peace activist who appeared in a duet with Israeli Arab singer Mira Awad to represent Israel at the 2009 Eurovision Song Contest.In response to Nini’s decision, Zilber told Israel Radio that the move was done for “populist” reasons intended to “gain more attention for herself.”
Advertisement
Subscribe for our daily newsletter