Madonna landed in Israel on May 24, where she is launching her 2012 world MDNA Tour in Israel, starting at Ramat Aviv Stadium.

By JPOST.COM STAFF
MAY 31, 2012 20:15
Madonna 390
(photo credit: Lucy Nicholson / Reuters)
Advertisement
American pop queen Madonna's Israel concert kicked off Thursday night with Jerusalem Post Staff tweeting the concert's thrills in real-time. French DJ Martin Solveig warmed up the crowd, prior to Madonna's appearance on stage. Madonna landed in Israel on May 24, where she is launching her 2012 world MDNA Tour in Israel, starting at Ramat Aviv Stadium on Thursday, May 31 – rescheduled from May 29. Her publicist had told the Post that Madonna is “extremely excited to be opening her tour in Israel.” 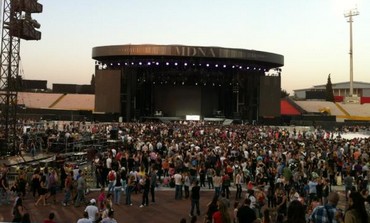