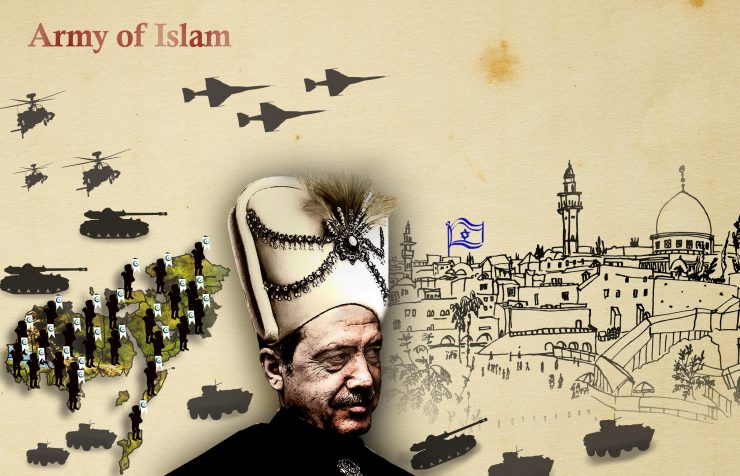 This article is co-written by Alon Ben-Meir and Arbana Xharra. Arbana Xharra authored a series of investigative reports on religious extremists and Turkey’s Islamic agenda operating in the Balkans. She has won numerous awards for her reporting, and was a 2015 recipient of the International Women of Courage Award from the US State Department. Less than a month ago, in advance of the summit of the Organization of Islamic Cooperation (OIC) in Istanbul, the Turkish daily Yeni Şafak, which is considered one of the mouthpieces of Erdogan and his ruling Justice and Development Party (AKP), published an article entitled “A Call for Urgent Action.” The same article was also published on the newspaper’s website with the more explicit title, “What if an Army of Islam was Formed Against Israel?” The article openly called on the 57 member states of the OIC to form a joint “Army of Islam” to simultaneously attack Israel from the east, west, north, and south. According to Israel’s Shin Bet, the source of the article appears to be the Turkish company SADAT, which among other sinister plots is aiding Hamas with funds and military gear to create a “Palestinian” army to join in the fight against Israel.

The creation of an Army of Islam

The idea of creating an “Army of Islam” to destroy Israel was accompanied by an interactive map providing formation of military forces for a joint Muslim attack on Israel. It also provides details on military forces based in various locations and the role they can play to execute their scheme. 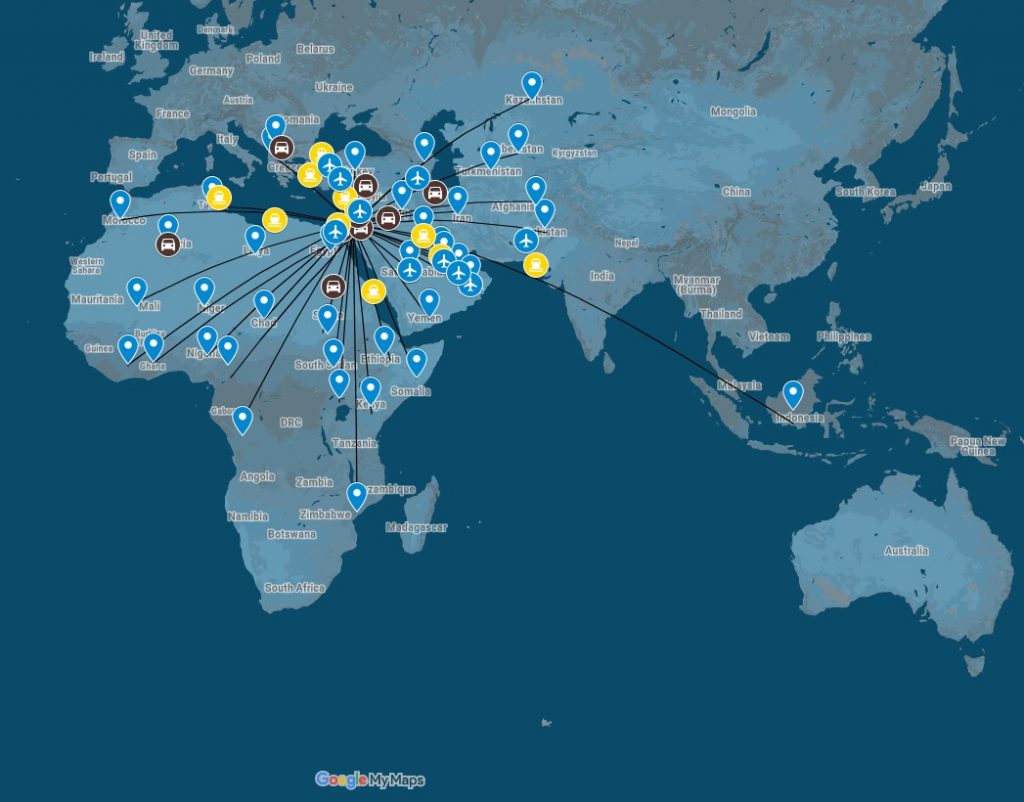 Yeni Şafak further explained that “If the member states of the OIC unite militarily, they will form the world’s largest and most comprehensive army. The number of active soldiers would be at least 5,206,100, while the defense budget would reach approximately $175 billion.”

This article provided additional details of the scandalous plan, stating that “It is expected that 250,000 soldiers will participate in the first of a possible operation. Land, air and naval bases of member states located in the most critical regions will be used. Joint bases will be constructed in a short period of time… It is possible for 500 tanks and armored vehicles, 100 planes and 500 attack helicopters and 50 ships to mobilize quickly.”

Regardless of how absurd and troubling this suicidal plan may seem, Erdogan did not disavow the report. In fact, he has reiterated on several occasions his ambition to resurrect the Ottoman Empire, in which context he wants to create the “Army of Islam.”

The Ottoman Empire he speaks of is the same that committed genocide against more than one million Armenians in the wake of the Ottomans’ defeat at the end of World War I. No one should dismiss Erdogan’s yet hidden illusion to commit genocide against the Jews in Israel. Erdogan is dangerous because he is insane enough not only to think in these incomprehensible terms, but to act on them on numerous fronts, as he is now doing.

In recent years, Erdogan has been busy establishing military bases in Qatar and Somalia, and most recently reached an agreement with the Sudan to acquire a Sudanese island in the Red Sea to be used as forward military base. Meanwhile, he is throwing his brash and bearish weight on the Caucasus and former Soviet states such as Afghanistan, Azerbaijan, and others to follow his dictates. He has repeatedly threatened to invade Greek islands in the Mediterranean, not to mention his recent incursion into Syria for the express purpose of establishing a permanent presence in the country under the guise of fighting Kurdish terrorism.

Recently, at the commemoration ceremony marking the 100th anniversary of the death of Ottoman Sultan Abdulhamid II at the Yildiz palace in Istanbul, Erdogan stated that “The Republic of Turkey, just like our previous states that are a continuation of one another, is also a continuation of the Ottomans.”

Declaring that Europe will be Muslim

Erdogan further stated, according to Bloomberg, that ‘Too many Turks, misled by the West, have cut the country off from its Ottoman roots.’ “History isn’t just a nation’s past, it’s the compass for its future.”

MP Alparslan Kavaklıoğlu, a member of the ruling AKP and the head of the parliament’s Security and Intelligence Commission, recently stated: “The Muslim population will outnumber the Christian population in Europe. This… has increased the nationalistic, xenophobic and anti-Islam rhetoric there. Hence, marginal, small parties have started to get large numbers of votes… But there is no remedy for it. Europe will be Muslim. We will be effective there, Allah willing. I am sure of that.” [emphasis added]

To promote the revival of the Ottoman Empire and his ambition to become the leader of the Muslim world, Erdogan exploits Islam as the common cause around which all Muslim states can rally. He uses religion to prevent questioning either his motive or the nature of his mission, as he can portray that as if it were all ordained by God. No one should be surprised if Erdogan soon announces that Sharia law is the law of the land. He exploits Islam for personal and political gain, uses Islamic symbols and precepts to indoctrinate the public, and promotes Islamic studies in schools to cultivate a new generation of devout Muslims loyal to him.

Although Erdogan still pretends to govern an Islamic democracy, the truth is that Turkey in no way resembles a democracy under his dictatorial reign. He is steadily making Turkey an Islamist state that stands by and supports Islamic extremist groups such Hamas and the likes of ISIS.

US and EU must stop Erdogan from blackmailing the West

Since the publication of this outrageous plan, not a single US or EU official has condemned it. The US and the EU must demand that Erdogan disassociate himself from the ideas reported by Yeni Şafak and reject it in the strongest terms. Moreover, the US should put Erdogan on notice that further promulgation of his Ottoman revivalist ideology will be dealt with as a threat to the US’ and EU’s strategic interests and will bear severe consequences.

No one, especially the US and EU, should dismiss Erdogan’s outrageous anti-Western scheme, which poses a major security threat. It’s time for the EU to permanently and publicly close the door to Turkey’s prospective EU membership.

No American administration should allow Turkey to threaten the destruction of one of its closest allies—Israel—which should have a chilling effect not only on every Israeli, but also on every close ally.

No leader who is silent about the creation of an Islamic Army should be trusted and treated as a legitimate head of state but must be dealt with as a traitor who is inviting disaster onto his country and people.

No country that cozies up to and buys weapons from the West’s enemy—Russia—and buys oil from the Islamic State should remain a member of NATO.

And no head of state who has dismantled every democratic pillar in his country and is transforming it into an extremist Islamic state can be a trusted as an ally – especially one who is interfering in the domestic affairs of many countries and undermining the international order.

Indeed, how many more sinister steps can Erdogan take before the EU and the US recognize that he is a threat against western strategic interests? He must be stopped from blackmailing the West while destroying the country that was envisioned by its founder Mustafa Kemal Atatürk.