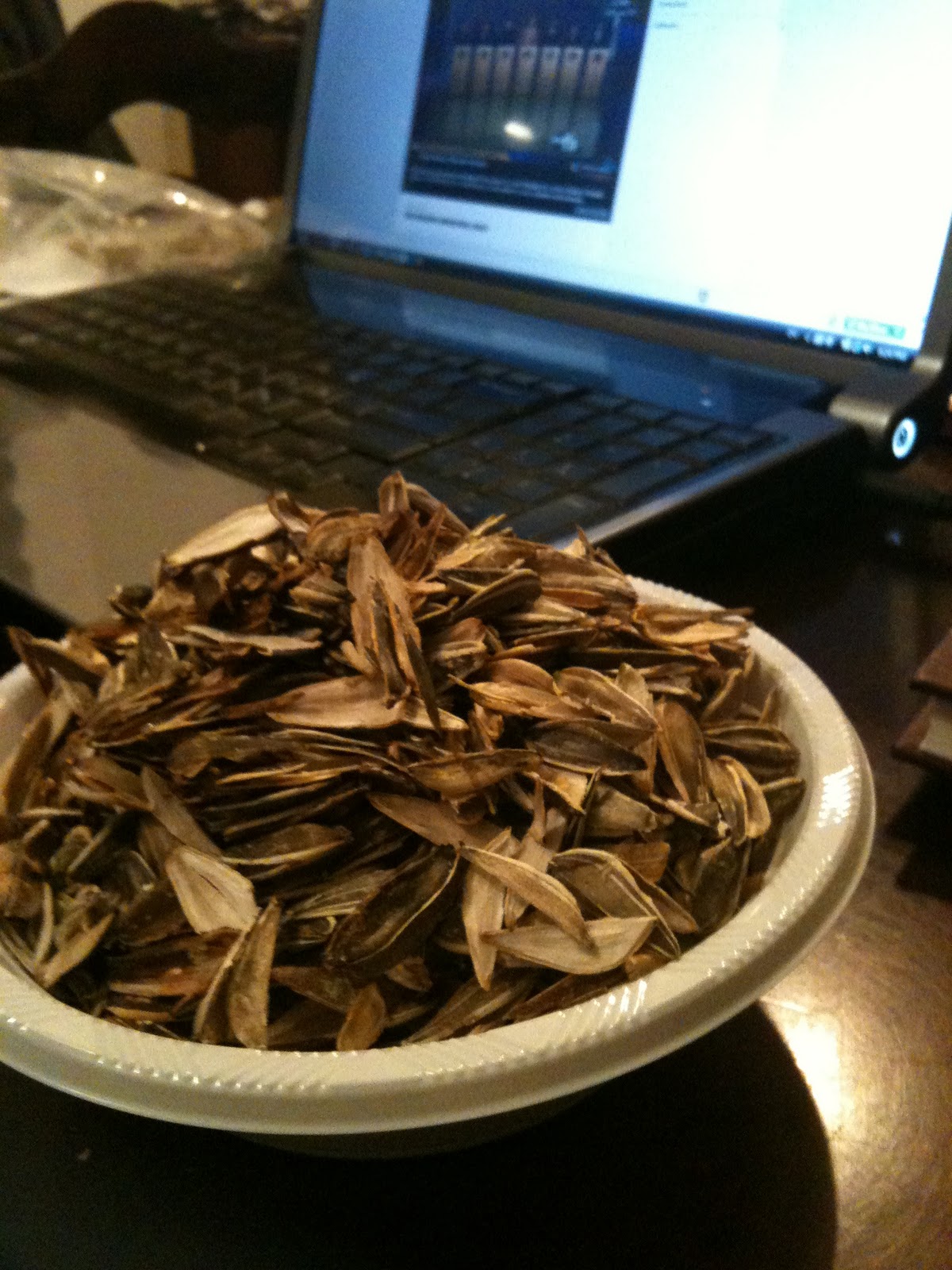 This week, I learned how to do something I have always thought of as quintessentially Israeli.  I learned to crack garanim (sunflower seeds) with my front teeth, tip my tongue inside to extract the meaty morsel within and toss aside the shell.

I was trained by a master - my Israeli-born, US-raised husband  - who has been doing this as long as I have known him.  In the interest of full disclosure, the impressive pile of discarded hulls pictured to the left is his doing, not mine.

Ironically, the action, once mastered, feels familiar to me in a déjà vu kinda way.  Maybe I was Israeli in a previous life?  I feel certain that I''ve done this garanim spitting thing before, in exactly this way, though I have no specific memory of learning how before a few days ago. 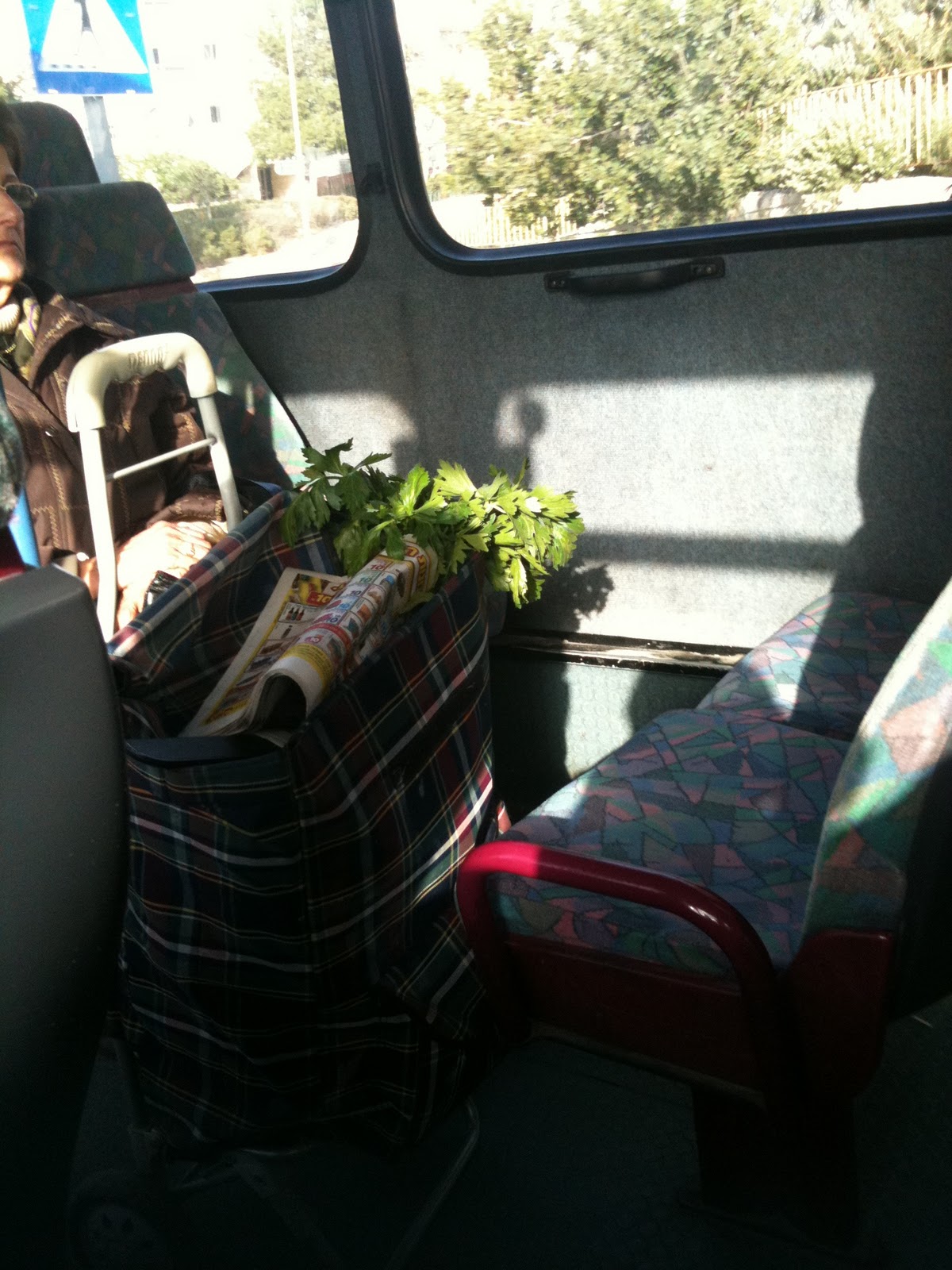 Another thing I think of as quintessentially Israeli is people transporting their produce on the bus.  My bus ride today took me on Rechov Aggripas and the Machane Yehuda shuk, so it''s not surprising that so many people brought their purchases on board my bus.  I didn''t want to attract attention when I snapped this photo from a few seats away, but here was the quintessentially Israeli woman, pictured with her "Bubbie Cart" - her wheeled shopping cart of the sort that is ubiquitous at the shuk.  The green leaves from her celery are sticking out and there''s a Hebrew newspaper lying on top.  Quintessentially Israeli.

I often comment about how, in my previous life in America, middle class Jews NEVER rode public buses.  Here, the buses carry every cross-section of Israeli society.  I find them endlessly fascinating. 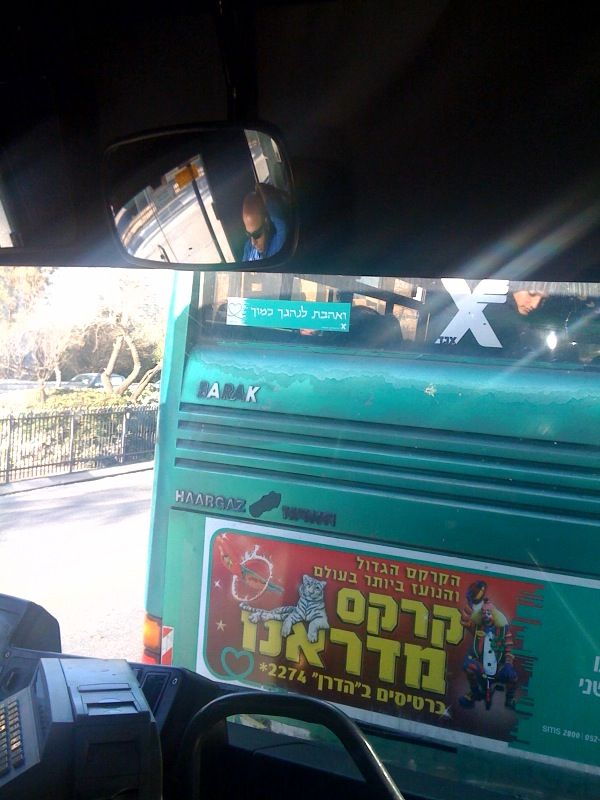 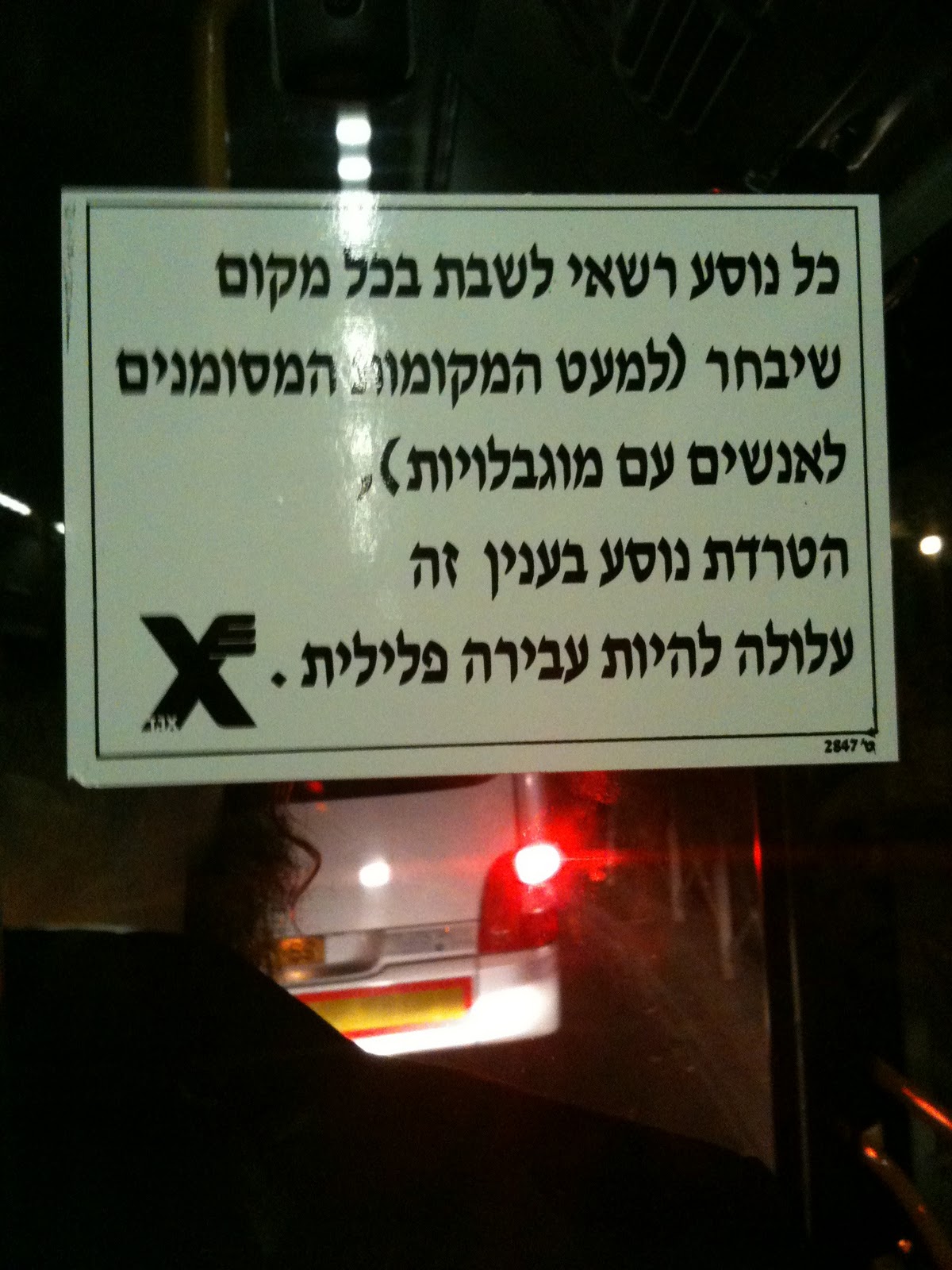 Finally, this sign, which I waited a long time to see.  It assures bus passengers that they are allowed to sit anywhere on the bus that they would like.  It was posted on all Egged buses in response to the recent ruling against what were called Mehadrin buses - specific bus routes which required women to sit in the back of the bus.  In January 2011, the Israeli courts abolished the Mehadrin buses which were, in my opinion, an offensive distortion of Jewish life.An approximate translation - All passengers have permission to sit anywhere that they choose except for places designated for people with disabilities.  Bothering any passenger in this regard results in a major infraction. Out of respect, I always choose to stand on the bus rather than to sit next to a Haredi man, even if the seat next to him is the only one open.  Nevertheless, I was nauseated by the enforced gender separation (and the association of racial segregation that Americans have with being forced to sit in "the back of the bus") of Mehadrin buses.  I throughly detested them.  This quintessentially Israeli sign makes me happy.