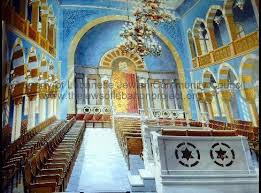 On 7 April a letter appeared in the Financial Times of London. Its author, one Massoud Derhally of Dubai, was at pains to correct an inaccuracy in the newspaper's augustly pink columns. An earlier FT article had cited 'persecution of Beirut's Jews' as the reason why the Safra banking family had emigrated to Brazil. "Not so," Mr Derhally insisted. As a former journalist who extensively reported on the 'Arab Jewish population of Syria and Lebanon' he could 'unequivocally say this assertion is not accurate.'Jews in Lebanon - 'Arab Jews,' he called them - had never been specifically targeted as Jews. "Like all Lebanese they left because of the great famine that hit the country in 1915, sectarian strife in the 1950s and again during the 1975 - 90 civil war."
The myth that Lebanese Jews fled the civil war was spread by Kirsten E Schulze in her book 'Jews of Lebanon', the only academic study so far published in English on this subject.  Not only does this myth allow apologists to assert that no Jew was targeted as a result of antisemitism, but the Israeli military could also be blamed for callously putting Lebanese Jews at risk when it bombarded PLO positions in Beirut, even damaging the roof of the Maghen Avraham synagogue.The truth is, however, that no more than 450  Jews remained in Lebanon during the civil war -  6,000 having left in 1967 in the wake of the Six Day War.Mr Derhally perpetuates the fiction that Jews arrived in Lebanon as a result of the Spanish Inquisition. This allows him to infer that the 'native' Muslims welcomed these relatively recent Jewish immigrants. In truth, while  a number of Jews could claim Sephardi ancestry, others belonged to an ancient Must'arab community predating Islam by  1,000 years.
"Lebanon was the only country in the Middle East where Jews thrived after the Second World War and where the population of Jews increased after Israel was founded and Palestinians were ejected from their homeland", continues Mr Derhally, inferring that Arabs had magnanimously welcomed Jews in their midst, while Israel had just shown  callous cruelty to Palestinians. He is correct to say that the Jewish population of Lebanon increased after WW2, swollen by Jews seeking refuge from the 1947 Syrian pogroms and Iraqi government persecution. But the stay of these Jews was transitory and they were never granted Lebanese citizenship. Indeed, no Jews born in Lebanon to foreign-born parents could acquire Lebanese citizenship - and any person who married a stateless citizen lost his or her Lebanese citizenship.
This was just one example of how  the Lebanese state, whose Constitution guaranteed the 'inalienable rights' of 18 different sects, discriminated against the Jewish community. Jews were banned from studying in Lebanese universities in 1947 and In the wake of the 1948 Arab-Israeli war, Jews were arrested and interned as Zionist spies. In the 1950s Jewish civil servants and even Jewish soldiers who had served in the Lebanese army were dismissed. Schools and synagogues were requisitioned to house Palestinian refugees.
The Jews were also targeted by street violence. In 1945, two years after Lebanon became independent,  a frenzied mob murdered 12 Jews in the Lebanese city of Tripoli. In January 1950, the Alliance Israelite in Beirut was destroyed by a bomb, killing the principal. According to 'Sephardi Communities today' by David Sitton, violence was a tactic used to extort money from the Jews, even contributions for the Arabs of Eretz Yisrael.
Hezbollah kidnapped and murdered the leader of the Lebanese Jewish community and nine other Jews.
While it is true that the government did try to protect the remaining few hundred  who were caught up in the civil war after 1975, the few Jews still in Lebanon are too terrified to self-identify, and the restored Maghen Avraham synagogue will never be more than a memorial to a defunct age of Lebanese pluralism.The Financial Times has now published a rebuttal letter from Lyn Julius.