By CLASH OF CULTURES
Advertisement

It is exactly sixty years since I arrived in England as a five-year-old refugee from Egypt. Here is the story of my family's flight from Egypt. The year 1956 was not the first recorded time that the Menir family was exiled from the land of their birth. The Encyclopaedia Judaica records that we lived in Tudela, Spain in the 13th Century, and by the time of the Spanish Inquisition of 1492, we left Spain and had followed the same route to Egypt as the Rambam (Maimonides).

I was born in Cairo, Egypt in 1951, and by 1956 my family was caught up in the conflict that became known as the Suez Crisis. This was for two reasons. Firstly we were Jewish and secondly my mother was a ‘British Subject'. My mother had acquired this status along with a British passport by virtue of the fact that her grandfather had worked for the British in India, generations earlier. My father’s classification, however, was ‘stateless’. Although he and his antecedents, for many generations, had been born and lived in Egypt, they were, nevertheless, deprived of any rights, recognition, or entitlements of citizenship because we were Jewish. I believe the official status is dhimmi. In essence we were subjugated and lived as second class citizens. However, we did enjoy a very good standard of living. My father established a successful cardboard box manufacturing business in Cairo.

My father was one of four siblings. He was the eldest and he eventually joined my mother in England. The second sibling established a life in Paris. The third went to live in the fledgling state of Israel where he lived under very difficult conditions in corrugated tin huts in a ma’abara for many years. The fourth, a sister, remained in Egypt with her aged parents until my grandfather passed away after which time she and my grandmother eventually moved to Israel.

As a consequence of the Suez Crisis, my mother, along with all British and French ‘citizens’ were unceremoniously expelled from Egypt. I have a memory of military personnel marching through our apartment delivering the expulsion order.

This caused my parents and grandparents severe heartache as my parents had five children and my mother was, at the time, six months pregnant with number six. She was obliged to leave for England on her own, without her husband, but with five children in tow. She was 24 years of age at the time. She spoke French and Arabic but no English and she knew no other culture than the Jewish/Egyptian one in which she grew up.
She was compelled to leave without any money or possessions of any value. She did, however, manage to buy a few gold bangles that she wore as jewellery and sold for the purpose of sustaining us down the line.
Once in England, my mother was housed in a refugee camp, first in Leeds and then in Kidderminster. These were essentially former wooden army barrack huts.
When my mother was ready to deliver her baby, my siblings and I were placed in the guardianship of the British Red Cross and she was taken to the local hospital to give birth. This was a particularly harrowing time for her as she had no means of communicating her concerns. During this time our suitcases were ransacked and many fine Cacharel clothes were stolen. Added to this, my mother returned from hospital to find that one of her children was missing. Her youngest, Vivienne, had developed measles and had been placed in isolation.
After six months my mother was at the end of her tether. My mother is the sweetest, most mild mannered, excruciatingly shy woman. Nevertheless, astonishingly, she found the strength to march into the office of the commander of the refugee camp. She banged on his desk, swiped all the paperwork to the floor and in her best newly acquired English she declared, “Captain Marsh, bring my husband!” To his credit, Captain Marsh did his utmost to make this happen and shortly afterwards my father joined us in the camps.
My father had been given permission to leave Egypt on condition that he abandoned his business, his home and all his possessions. Everything was confiscated by the Egyptian authorities and to this day we have received not a penny in compensation. 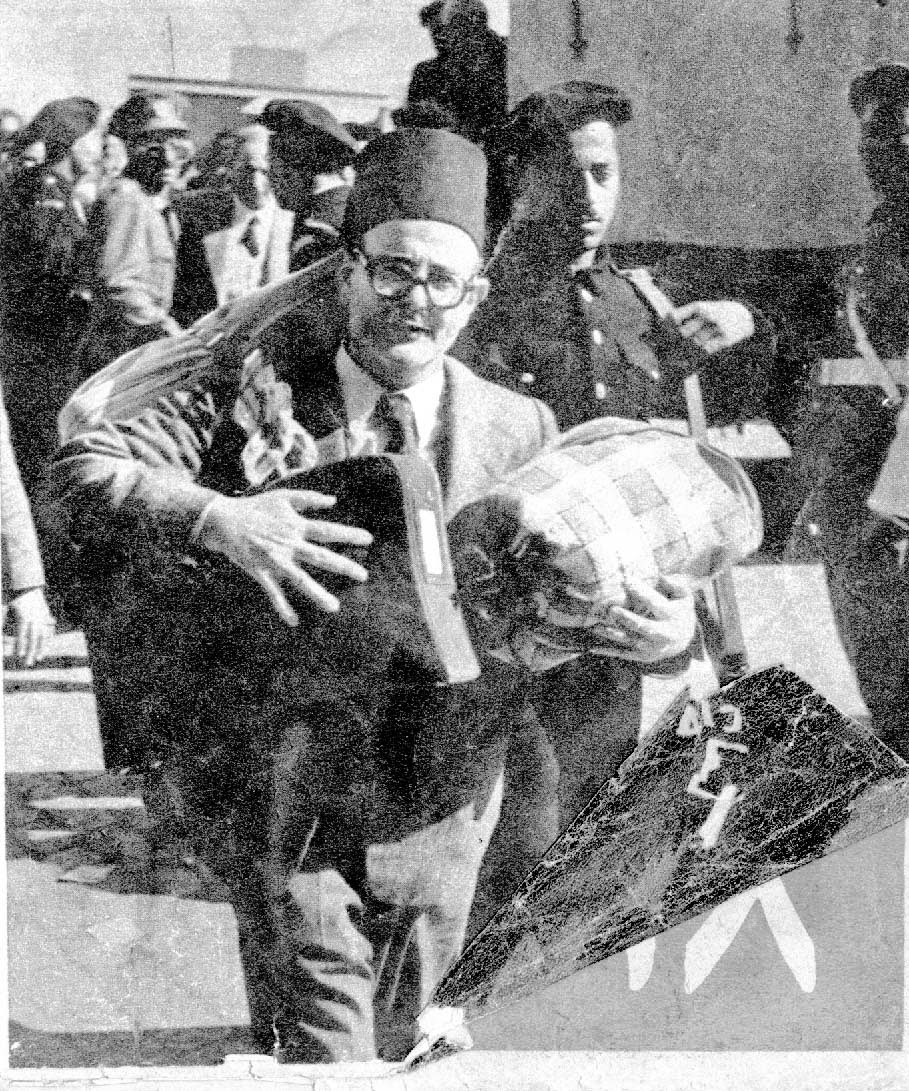 The early years in England were extremely difficult for my parents. They had no money, no home and no livelihood. Added to this, it was against every economic, social and spiritual tide that my parents maintained a strictly orthodox home.

Shortly after this we were welcomed by the Birmingham Jewish community, where we were housed in a Victorian tenement building along with half-a-dozen other refugee Jewish/Egyptian families, and committed to paying a nominal weekly rent.  My parents, who started from rock bottom, worked unbelievably hard, living a life of deprivation and self sacrifice. They devoted all their time and energy to caring for their family’s wellbeing and education, to the exclusion of all else. After many attempts to work for others my father was eventually able to set up a small cardboard box manufacturing business which subsequently grew into a highly successful one. In this way he himself was then able to provide employment for many other needy individuals.
From the moment my parents arrived in England, they showed their gratitude to their British hosts by naming their new born baby Elizabeth after the Queen of England. My father enrolled in night school to learn to speak English and soon spoke English better than any Englishman. My father became a dapper English gentleman, albeit with an Egyptian accent. When he could afford it he bought my mother the finest clothes and had bespoke suits made for himself along with matching bowler hats which he wore jauntily. The pinnacle of his achievement was when he managed to buy himself a Rolls Royce. As a mitzvah, he shared his good fortune by using his car to drive many a bride to the Chuppah.
I and my siblings are certainly ‘forgotten refugees’, but the point is that at no time in our life did my parents define the family as such. At no point was that label used as a yoke that bound us to our unfortunate early life. My parents embraced their new life in exile and worked hard to improve their lot. That is why I find the plight of the Palestinian refugees so heart-rending. To hold on steadfastly to a refugee status for seventy years is to deprive oneself, one's children and grandchildren of the opportunity of leading a productive life of promise and fulfilment.