Maze cartoon about Obama''s stance on the Ground Zero Mosque. 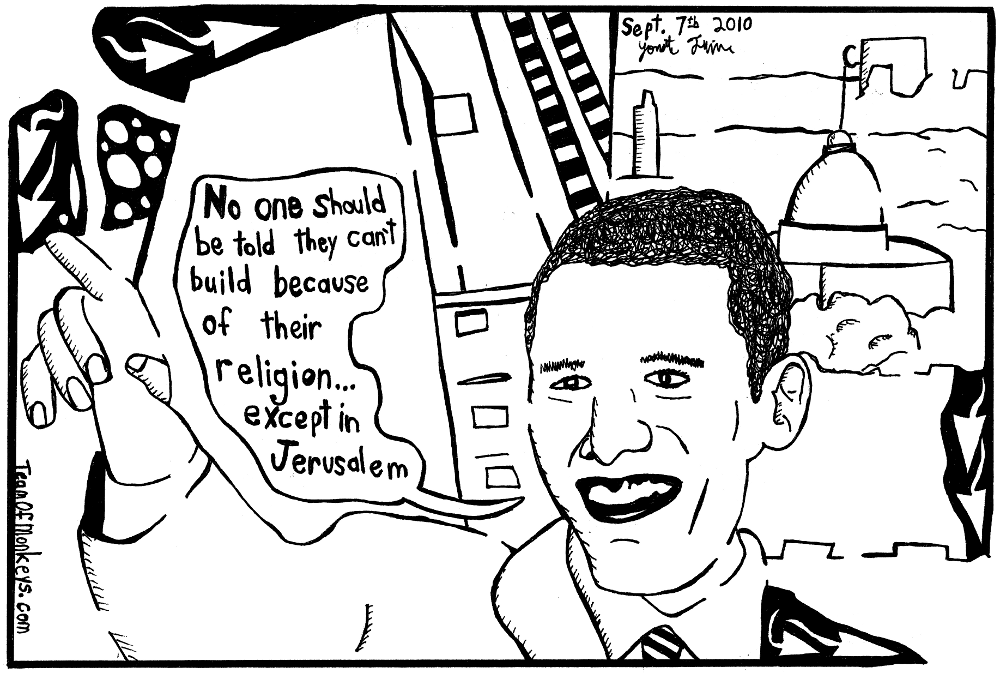 maze cartoon of Obama on ground zero and building in Jerusalem thanks to Yonatan Frimer
Maze cartoon by Yonatan Frimer about Obama''s stance that the Ground Zero mosque should be built since no one should be restricted from building based on their religious beliefs, except he says the opposite when building in Jerusalem, which is a conflict in policy.Click here for a printable, hi-res file of Obama''s Ground Zero Maze
Click here for the solution to the jerusalem and ground zero maze

Article on the topic of this maze cartoon:
Obama backs Ground Zero mosque
Simon Mann, Washington
BARACK Obama has endorsed the building of an Islamic community centre and mosque near Ground Zero in New York, saying, "Muslims have the same right to practise their religion as everyone else" in America.
"That includes the right to build a place of worship … on private property in lower Manhattan, in accordance with local laws and ordinances. This is America," the President told guests at a dinner at the White House honouring the Muslim holy month of Ramadan.
"Our commitment to religious freedom must be unshakeable,'''' he said. ''''The principle that people of all faiths are welcome in this country and that they will not be treated differently by their government is essential to who we are."
Click here to read the full article about Obama backing ground zero mosque
Advertisement
Subscribe for our daily newsletter