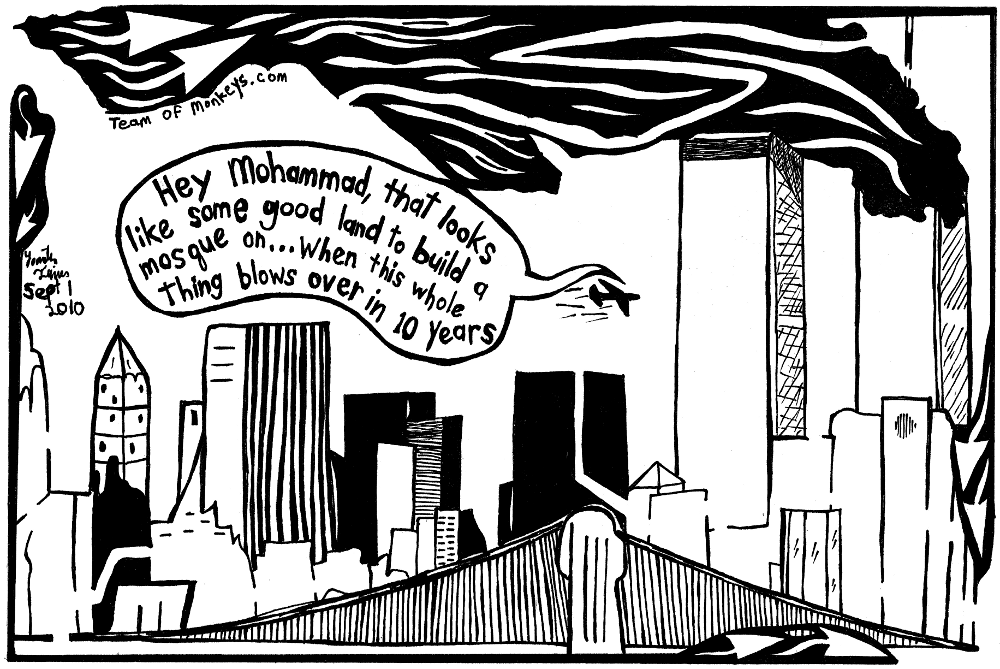 maze of attack on second tower on september 11th
Maze cartoon about the ground zero mosque that is being built. The scene is September 11th 2001 and the second plane is about to hit the tower of the World Trade Center. One of the hi jackers says, "Hey Mohammad, that looks like a some good land to build a mosque on....When this whole thing blows over in like 10 years."Click here for a printable, hi-res file of the Sept 11th Ground Zero Maze
Click here for the ground zero mosque maze solution
More on the topic of this maze cartoon:
Ground Zero: Exaggerating the Jihadist Threat
Should Muslims be allowed to build a mosque at Ground Zero? Merely posing the question is an act of deliberate distortion. As its defenders point out, the Community Center at Park51 will occupy not a solitary inch of the 16-block site on which the Twin Towers stood. Once built, the center will indeed house a mosque, "open and accessible to all" — but also a swimming pool, basketball court, auditorium, library, day-care facility, restaurant and cooking school. The center is being built by a private organization on land it legally owns. Twenty-nine out of 30 lower Manhattan community-board members voted to approve it. By every legal standard, the case for allowing Park51 to be built is, in the words of conservative UCLA constitutional-law professor Eugene Volokh, "open and shut."
But the question isn''t going away. President Obama''s statement on Aug. 13 endorsing "the right to build a place of worship and a community center on private property in lower Manhattan" has unleashed another storm of partisan bloviation. Obama is "pandering to radical Islam," says Newt Gingrich; John Boehner finds Obama''s comments "deeply troubling." On this issue, the President''s critics have public opinion on their side: nearly 70% of Americans in a CNN–Opinion Research Corporation poll say they oppose a Ground Zero mosque. (See Mark Halperin on why the GOP should avoid the issue.)
Many opponents of the Park51 project claim that the mosque itself isn''t the problem; it''s the idea of building it so close to the World Trade Center. Such misgivings have some validity. But the heat the mosque controversy has generated, on both the left and right, is unhealthy, misplaced and ultimately self-defeating. It reflects our tendency to exaggerate the real threat posed by Islamic extremism and what the U.S. should do about it. And nine years after 9/11, the fight over the mosque near Ground Zero shows how obsessed we remain with an enemy that may no longer exist. (See more commentary on Islamophobia and the mosque debate.)
Read the full article here