Jobs lost to recession like bullet through playing card

By YONATAN FRIMER
Advertisement
Maze cartoon of the recession''s effect on jobs, bullet slices through queen of hearts. 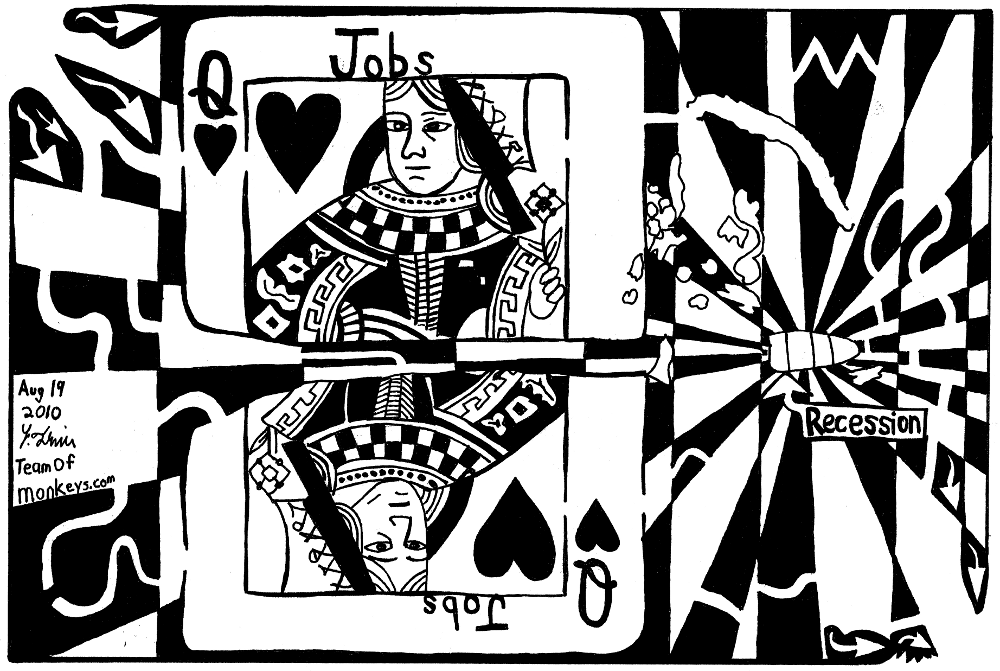 Cartoon maze of a bullet cutting through the maze of hearts in a very psychedelic way
Maze cartoon of a bullet cutting the queen of hearts, to represent the effect of the recession on jobs.By Yonatan FrimerClick here for a printable, hi-res version of this mazeClick here for the maze solution of bullet thru queen of hearts More on this maze cartoon topic: Worst joblessness statistics for nine months and gloomy manufacturing data send dollar and Wall Street tumblingShares plunged on Wall Street and the dollar fell sharply tonight after an increase in jobless claims and weak signals from industry prompted fears that the US is heading for a double-dip recession.

The Dow Jones index fell 200 points at one stage in morning trading in New York after the US labour department reported that 500,000 new claims for unemployment benefit were filed in the week ending 14 August – an increase of 12,000 on the previous week and the highest figure for nine months.

The already gloomy mood was compounded when the Philadelphia Fed, one of the Federal Reserve''s 12 regional reserve banks, published its monthly health check on manufacturing in America''s mid-Atlantic region. The survey, seen by Wall Street as a barometer of US industrial conditions, showed activity had contracted unexpectedly for the first time since July 2009.

President Barack Obama called on Congress to pass a bill providing support for small businesses, but Wall Street believes the threat to the world''s biggest economy will also require action by the Federal Reserve to expand the money supply through its quantitative easing programme. James Bullard, president of the St Louis Fed, said tonight that the central bank would need to step up its purchases of bonds should the threat of deflation intensify.