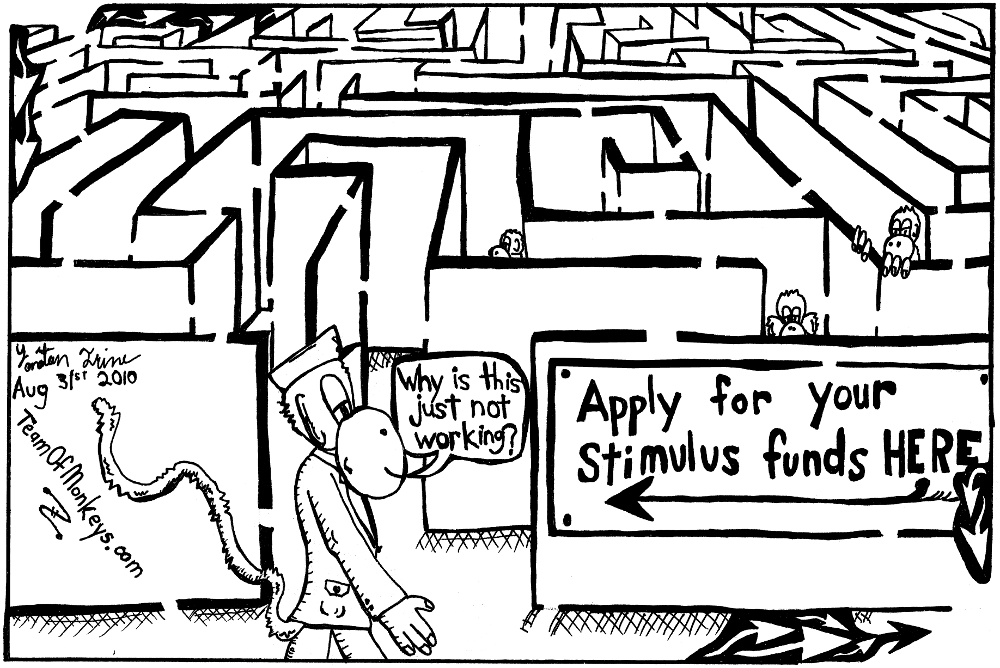 maze of the maze for stimulus funds applications by Yonatan Frimer
Maze cartoon of a maze representing the stimulus fund application process maze. The monkey character says, "Why is this just not working?!"By Yonatan FrimerClick here for a printable, hi-res file of the maze of a mazeClick here for the maze of a maze maze solutionMore on the topic of this Maze cartoon:The Stimulus Plan that didn''t stimulate

While they’re not officially over, and probably won’t be for several more months, the federal stimulus programs launched over the past 18 months or so are certainly fading away.

And while it will likely take economists and university researchers years to try to tabulate the relative good of the sum of these programs, which totaled close to $1 trillion, a long look out an office window in Springfield, Holyoke, or Northampton would likely yield a ‘not much’ as an answer to the question ‘what did the stimulus do here?’

Yes, there have been some road and other infrastructure projects in several area communities that created temporary construction opportunities and will, we hope, make traveling safer and easier here in the Pioneer Valley. Meanwhile, there were some stimulus initiatives, such as the federal homebuyers tax credit and the famous (or infamous) Cash for Clunkers program that produced spikes in consumer activity that, if one wants to be generous, probably kept things from getting any worse than they ultimately became.

But a quick look at the business page, which, at press time, was telling of a precipitous slide on Wall Street, single-family home sales in July that were down 25% from a year ago, sluggish back-to-school sales, national unemployment hovering just below that crisis level of 10%, and economists predicting slow — make that painfully slow — growth for the national economy, reveals that things are still quite bad.