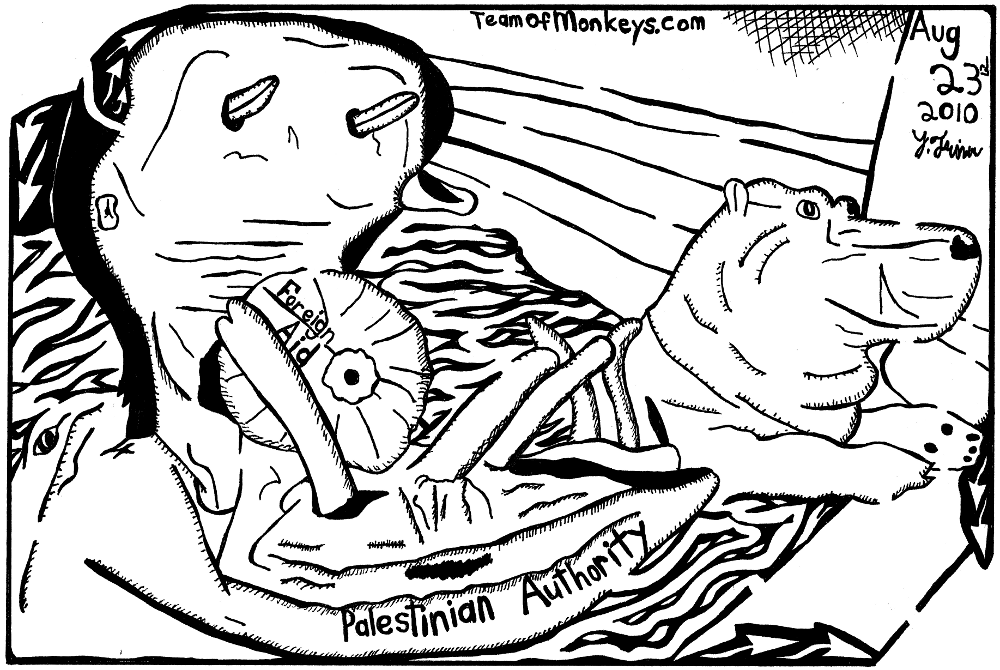 maze cartoon poking fun at the palestinian authority for eating though foreign aid like a hungry hippo
Maze cartoon of a hippopotamus labelled "Palestinian Authority" eating a whole melon labelled, "Foreign aid."By Yonatan FrimerClick here for a printable, hi-res file of Hungry Hippo MazeClick here for the maze solution of Hungry Hippo MazeMore on the topic of this maze cartoon:US showers $2.2 billion in bilateral aid on the Palestinians Since the 1993 Oslo Accords, the U.S. has showered $2.2 billion in bilateral aid on the Palestinians, in addition to more than $3.4 billion for humanitarian aid funneled through dysfunctional U.N. organizations since 1950.The U.S. debt will top $13.6 trillion this year and climb to an estimated $19.6 trillion by 2015, according to a Treasury Department report to Congress. Bankruptcy filings are nearing the record two million level of 2005 and unemployment is nearly 10%, yet, in mid-June, President Obama pledged a $400M aid package for supposed housing, schools, water and health care system projects in the West Bank and Hamas-ruled Gaza. He described these projects as a "down payment on the U.S. commitment to the people of Gaza who deserve a chance to take part in building a viable, independent state of Palestine, together with those who live in the West Bank."

He must have forgotten that the Gazans first act of "independence" after the Israeli withdrawal from the territory in 2005 was to destroy the lucrative greenhouse industry that the Israelis left behind, but that should have served as a reminder of the billions in aid that have been squandered in pursuit of this pipedream. According to the Heritage Foundation, since the 1993 Oslo Accords, the U.S. has showered $2.2 billion in bilateral aid on the Palestinians, in addition to more than $3.4 billion for humanitarian aid funneled through dysfunctional UN organizations since 1950 – and yet, they are still considered "refugees." That''s because vast amounts of these aid funds have been diverted to allow terrorist organizations like Hamas to focus on building its war infrastructure such as bunkers, fortifying positions and digging tunnels, rather than on subsidizing education, paving roads, promoting commerce and industry, or providing for and advancing the long-term interests of their people.

Should Congress approve this aid package, it will only serve to stabilize the Hamas regime, assist in consolidating its power, and inhibit the development of the social, political and economic infrastructures necessary to build a viable, unified and stable Palestinian state. Hamas''s desire for more construction materials has more to do with rebuilding and strengthening its war machine against Israel than the needs of ordinary Gazans so it''s fair to ask this administration: "Where''s the strategic logic behind this pledge?" Money is fungible, so where are the assurances and accountability mechanisms necessary to insure that this money will not be spent on terrorism and missiles as has occurred in the past?