By BATYA MEDAD
AUGUST 30, 2015 11:23
Advertisement
This was originally posted on my blog Shiloh Musings, http://shilohmusings.blogspot.co.il/2015/08/15-of-judeasamaria-jewish-population.html 15% of Judea/Samaria Jewish Population AmericanThose familiar with the Jewish communities in Judea and Samaria, aka the west bank sic, know that a relatively high proportion of the population is immigrants, whether North or South America, Europe and also Australia and New Zealand. There are also a relatively large amount of converts from all over the world, even places without a notable Jewish population. Foreign and international journalists needing to interview residents, have no problems finding people who can speak all sorts of languages, and not only the expected, English, French, Spanish and Russian. No doubt that Shiloh is typical that you'll also find less common Jewish languages such as Portuguese, Dutch and Chinese.

Efrat, Photo by Batya Medad There are YESHA communities well-known as anglo, meaning full of English speakers, such as Efrat and Ginot Shomron. Not all English speakers are American, but since nobody has more trouble learning Hebrew or any other foreign language than Americans, English speakers do try to live together. Even Shiloh has a sizable number of English speakers, of which many are American. We even have a number of events specifically for English speakers, such as a Book Club and Torah classes. The senior citizens programs have an ulpan and translation into English when needed.At the not very well publicized (we never saw any announcements, and a neighbor complained that she only received a notice a couple of days before) recent Jerusalem Limmud, Sara Yael Hirschhorn publicized her new book:
Speaking at the Limmud conference in Jerusalem, Sara Yael Hirschhorn, in a promotional lecture for her soon-to-be published book, said that out of the approximately 400,000 Jews living in the West Bank, 60,000 were Americans. The figures did not include east Jerusalem, Newsweek added. (Jerusalem Post)
I decided to check out the Newsweek article, too:
However, Hirschhorn says her research, which took place over a period of 10 years, contradicts the belief that many American citizens emigrated to Israel because of their Right-wing beliefs, ultra-Orthodox religion or because of a lack of opportunities in the U.S. "What my studies reveal is that they were young, single, highly-educated—something like 10 percent of American settlers in the occupied territories hold PhDs, they're upwardly mobile, they're traditional but not necessarily Orthodox in their religious practice," she said, according to Haaretz. "Most importantly, they were politically active in the leftist socialist movements in the U.S. in the 1960s and 70s and voted for the Democratic Party prior to their immigration to Israel." She added that the mainstream picture of the American settlers she studied "is one of young, idealistic, intelligent and seasoned liberal Americans who were Zionist activists, and who were eager to apply their values and experiences to the Israeli settler movement."
No surprise but I don't think Hirschhorn got it. I don't know for sure whom she interviewed, because it's pretty clear to me why so many Americans are in the yishuvim, and she's in a quandary. 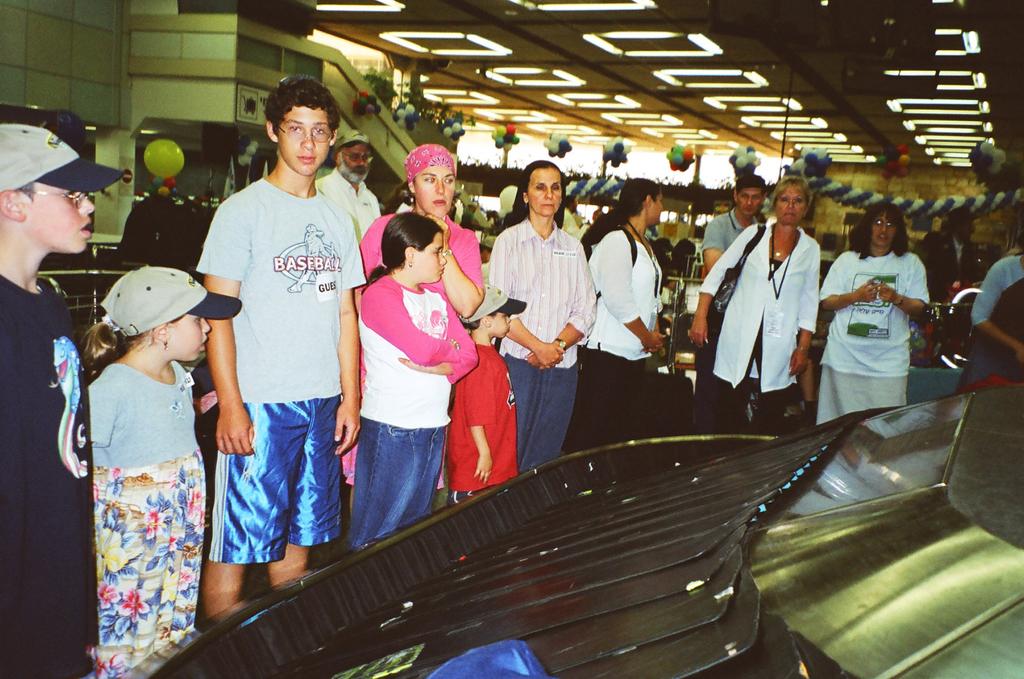 NBN ten years ago, photo by Batya MedadAs you can see even today in pictures of Nefesh B'Nefesh olim, immigrants, many are religious. I accompanied NBN charter flights ten years ago, and it was very clear that there has been no change. If anything, more religious or traditional Jews come to live in Israel than non-religious. And of course, those who make aliyah are of stronger ideology than those who don't, no matter where they come from. And among Israeli born/raised, those who are firmer in their Zionism in principles try to live in the Land of Israel liberated in the 1967 Six Days War. That was the situation when we made aliyah in 1970 and hasn't really changed.You will certainly find many Americans and other anglos in the Leftist-nouveau-Judaism crowd in Tel Aviv, too. That's for the same basic reason. Making aliyah is not easy, and most Jews who do it from choice come from a strong ideology, whether on the Right or the Left. Also, many of us American immigrants were leaders in our Jewish communities or Jewish organizations, youth movements etc. We stood out, stand out and aren't afraid to take a stand! I don't know this Sara Yael Hirschhorn, but it seems like she's too closed in her Leftist bubble to see the big picture, and that's a shame.