By BATYA MEDAD
JUNE 7, 2016 06:40
Advertisement
This was first posted on my blog Shiloh Musings as A Six Days War IDF Soldier Tells his Story, http://shilohmusings.blogspot.co.il/2016/06/a-six-days-war-idf-soldier-tells-his.html. 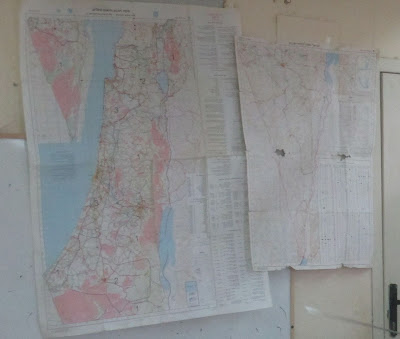 Photo by Batya Medad
Photo by Batya Medad (me)Yesterday, in honor of Yom Yerushalayim, Jerusalem Day, the Shiloh Golden Agers/Senior Citizen program invited one of the neighbors to tell his story as a an IDF soldier during the 1967 Six Days War. Yes, if you've done the math, you know that age-wise he's also a senior citizen, but a very busy one who doesn't go the the activities. Most of the regulars are actually immigrants, and yesterday's crowd was mostly English speakers, so the coordinator was happy when I surprised everyone and walked in, since I do lots of translating for them when I can. Of course, no surprise to you, my translations are full of "commentary."Our neighbor grew up on Tirat Tzvi, a religious kibbutz in the north of Israel.

Kibbutz Tirat Zvi was established on 21st of Tammuz, 5697, (June 30, 1937) as a "Tower and Stockade" settlement intended to mark the southern limit of Jewish settlement in the Bet Shean Valley.
Its first decade was marked by ceaseless struggle for existence against extremely difficult climatic conditions, swamps, malaria, tense day-to-day relations with local Arabs, and periodic organized enemy assault.
On the 6th of Adar 56, 5708, (February 16th, 1948), the one hundred primitively armed members of Tirat Zvi repelled a coordinated attack by over six hundred regular Iraqi troops.

He knew very well of the frequent Syrian shelling/sniping on the Jewish communities in his area coming from the Syrian held Golan Heights.After a summary of the pre-Six Days War threats from the Egyptians and Syrians, and the cooperation of the United Nations, which readily removed its "peacekeeping forces" from the area to facilitate the Arab attack on Israel, we heard our neighbor's story.Instead of the usual call-up codes on the radio, which at that time was the entertainment and news source for Israelis, the IDF conducted an unprecedented "quiet call up" of reservists, going literally house to house to gather troops and take them to various bases for pre-war preparation. You should know that at that time, very few Israelis had telephones. Our neighbor was called on Shabbat, Friday night after dinner, and taken to his base. On the way they picked up other soldiers.At the base they got their equipment and then went to another location where they began to train for an assault on the Golan Heights; each unit was assigned a different section.All the while, Egypt, Syria and Iraq, well supplied by the USSR, continued with their threats of war, while Jordan remained silent. The Israeli Government kept hoping that Jordan would desist in joining the expected attack on Israel.Early in the morning June 5, 1967, while unknown to my neighbor and his unit, Israel had launched an attack on the airfields of Syria, Egypt, Jordan and what could be reached in Iraq. What my neighbor and his fellow soldiers saw was something else. Suddenly two unmarked and unfamiliar planes flew over them. Within seconds Israeli planes reached them and began an air battle, yes, just like in the movies. One of the unmarked planes went down, and then the second one. Afterwards they found out that those were Iraqi planes and that was pretty much Iraq's participation in the war to annihilate and destroy the State of Israel.Contrary to facts on the ground, Egypt and Syria continued to broadcast optimistic and inaccurate news that they were marching on Tel Aviv and Haifa. They urged King Hussein of Jordan to join in or they would take over the areas his country had been occupying since 1949, the so called West Bank, Judea, Samaria and the Jordan Valley.In the meantime, my neighbor's unit had been told to change plans and went to the mountains looking over Shechem, Grizim and Eval. In the dark of the night, they literally found the Jordanian tank corps with their "pants down," sound asleep in pajamas. When the Jordanians realized that the IDF had found them they fled, leaving their brand new American fully equipped tanks* for Israel to adopt.When they got to Shechem, they sent an Arabic speaking IDF soldier to find the mayor and offer him a deal. The mayor agreed and entered the police compound, where the Jordanian legion was lodged, equipped with a white flag for surrender. After a short while, the Jordanian flag was lowered and white one raised.At some point during all of this, suddenly my neighbor realized that he was part of the liberating of our Holy Land, the City of Shechem in which our Forefathers had lived and Joseph is buried. Then, to collect all of the weapons the Arabs had, they were told that they had 48 hours to bring weapons to the square without any repercussions, punishment. If any weapons were to be found in homes after that the punishment would be fierce. It worked, and the IDF got a lot of weapons from the arabs.At one point, someone arrived with a newspaper heralding the liberation of Jerusalem the Kotel (western wall) and Har HaBayit (the Temple Mount.) Until then, my neighbor hadn't a clue as to what was going on in the rest of the country.His unit was finally sent to secure a section of the Golan Heights, but not the section they had been prepared for. And remember that the entire war took only Six Days.The 1967 Six Days War was a miracle of Biblical proportions. Of this I have absolutely no doubt!!

*The Americans had refused to sell tanks to Israel, but obviously had no problems equipping the Jordanians. Also the USSR had been equipping the Egyptians and Syrians. Israel had inferior weaponry, since the best suppliers boycotted our country.