Not If, But When

Over 3 years ago I wrote about the TSA and called it “window dressing”, now on the heels of knives being allowed back on planes and a fake bomb making it through security, a former TSA agent has come forward and stated what I’ve known all along. 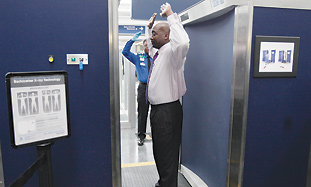 Remember the “Current Threat Level”, you know, the red, orange, yellow, blue and green color bar that the Department of Homeland Security uses to keep the public up to date on the U.S. terror threat? Bet you have no idea what color it is today.

The Homeland Security Advisory System is a means to disseminate information regarding the risk of terrorist acts to federal, state, and local authorities and to the American people.

In case you’re interested, we are currently at ‘yellow’ and incidentally we have been at “yellow” since September 10, 2007. The last time the color or level changed was back on June 30, 2007.

The system was created by a Homeland Security Presidential Directive 3 on March 11, 2002 and was unveiled on March 12, 2002. The original system was phased out on April 27, 2011, and replaced with a new system called the National Terrorism Advisory System.

I’m happy to say that it serves its purpose today about as well as it did when I wrote my article “Why is Our Government Hiding the Truth About Our Safety?” back on February 21, 2010 three years ago.

Interestingly enough I had written about the TSA in that article,

Since 9/11, since the creation of Homeland Security, since the changes in the TSA and since our supposed increased National security, I have been saying that we are not any safer today than we were on 9/10. Everything our Government has done is nothing more than window dressing.

Well, you don’t say! At the cost of approximately 8 billion dollars annually, according to TSA News, it is one hell of an expensive show. The budget cuts and sequester didn’t seem to affect the show too much either as the TSA just ordered 50 million dollars in new uniforms.

The impending sequester did not prevent the Transportation Security Administration (TSA) from acting in late February to seal a $50-million deal to purchase new uniforms for its agents--uniforms that will be partly manufactured in Mexico.

The TSA employs 50,000 security officers, inspectors, air marshals and managers. That means that the uniform contract will pay the equivalent of $1,000 per TSA employee over the course of the year.

Well at least the TSA will look good while groping us if nothing else.

Just last week the TSA made the news because an undercover TSA inspector got a fake bomb through security at Newark Liberty International Airport. The fake improvised explosive device was stashed in his pants and he cleared two different layers of security and managed to be cleared to board a commercial flight.

The incident was part of an undercover inspection at Newark and followed an abysmal performance on an audit last October.

* Followed proper pat down procedures just 16.7 percent of the time.

What’s worse is that the TSA evidently didn’t catch 3 out of 4 fake bombs. The NY Post reported,

Only one member of the four-man "Red Team" that purported to bring explosives onto planes on Feb. 25 was caught, according to the report. That actor was detected with an IED hidden inside a doll, though sources told the Post that it had wires sticking out of it and was quite obvious.

I have written 10 different articles on the TSA over the years and spoken about the “joke of security” that it is. I have stated time and time again both on my radio program as well as in my lectures “it isn’t a question of if we will suffer another terrorist attack but rather when.” Once again I must refer back to the NY Post interview where the former TSA agent stated,

“What are the chances of you being on a flight where something happens? We always said it’s not a question of if terrorists get through — it’s a question of when. Our feeling is nothing’s happened because they haven’t wanted it to happen.”

That sounds familiar. What I found to me one of the most disturbing things in the interview was where the former agent explained,

“These are the employees who could never keep a job in the private sector. I wouldn’t trust them to walk my dog.”

He explained the education level needed to work as an agent as well,

“Did you know you don’t need a high-school diploma or GED to work as a security screener? These are the same screeners that TSA chief John Pistole and Homeland Security Secretary Janet Napolitano refer to as a first-class first line of defense in the war on terror.”

“First line of defense”? That is a joke. As my friends and family know I hate to fly, if I can drive there I’ll opt for the car ride rather than being in the air. It’s not due to a fear of flying as much as that I know the truth behind our so-called security.

2 Years ago when I flew out of LaGuardia I entered the passengers only “secure area” and boarded the plane with no security check at all. I wasn’t attempting to side step security as I had done in the past, no, I just was never checked.

The line that I chose, along with everyone else, just walked right in, no metal detectors, no scanners, no TSA agents, we just walked right through while those in other lines were checked as usual. Oh, and we didn’t even have to take off our shoes. Apparently the area where the line formed was just forgotten about and no TSA was there at all. Yeah, that was a fun flight.

More recently in January, I flew in and out of Phoenix Sky Harbor International Airport with a stop over each way, a total of 3 airports in each direction. I wore my DHS (Department of Homeland Security) jacket which I had received as a gift for a class/lecture I gave to members of the DHS on terrorism. Needless to say, the TSA agents were more interested in what my job was than checking me properly. Questions and comments such as,

This is just another example and backs up what the former TSA agent said in his interview with the NY Post,

“Most TSA screeners know their job is a complete joke. Their goal is to use this as a stepping stone to another government agency.”

I was told on two occasions “We’re on the same team, come on through.” This was only due to my jacket, for all these TSA people knew I had stolen it; they had no idea who I was or ever asked me for my credentials, they assumed if I had the DHS jacket I was safe.

Now knives will be allowed on planes once again. What could possibly go wrong there? As a Wall Street Journal article explains,

Sen. Charles Schumer wants the Transportation Security Administration to reverse its newly announced plan to allow passengers to bring small knives and other items, like golf clubs and hockey sticks, onto planes.

"While it''s true that pilots are safe, locked behind cockpit doors, these dangerous items still pose a significant hazard to the flight crew, other passengers, and even the integrity of the plane," said Schumer.

As pointed out however by the former TSA agents interview,

“Incidentally, the flap over the new rule allowing small pocketknives is overblown. Most of the public doesn’t realize it, but you are already allowed to bring scissors, screwdrivers, tweezers, knitting needles and any number of sharp instruments on board.”

What in the hell does someone even need a screwdriver on a plane for anyway, do they plan on detaching their seat to make more leg room?

Once again, you don’t have to take my word for it. Next time you fly remember the words of the former TSA agent,

“Anyone boarding an aircraft should feel maybe only a teeny tiny bit safer than if there were no TSA at all.”

Yes, it’s “a teeny tiny bit safer”, after all as of April 25 you’ll be able to carry your pocket knife for protection.

Gadi Adelman is a freelance writer and lecturer on the history of terrorism and counterterrorism. He grew up in Israel, studying terrorism and Islam for 35 years after surviving a terrorist bomb in Jerusalem in which 7 children were killed. Since returning to the U. S., Gadi teaches and lectures to law enforcement agencies as well as high schools and colleges. His articles have appeared in The Jerusalem Post, Frontpage Mag, Family Security Matters and dozens of other sites. He can be heard every Thursday night at 8PM est. on his own radio show “America Akbar” on Blog Talk Radio. He can be reached through his website gadiadelman.com.