Calling A Spade A Spade

By JORDANA BROWN
Advertisement
I haven't written in a while, mostly because I haven't had that much to say and I don't like to post just for posting's sake. Then, furiously and all at once, things happen and I have to choose what to write about, and how to organize my disparate and racing thoughts into one coherent, and hopefully interesting, blog post.

Three things I want to weave together to hopefully make some sense of this crazy, scary, beautiful, infuriating world in which we live. The first is the EU boycott and labeling of products made in "disputed areas" of Israel. Needless to say, it sickens me to my very core, it is clearly and without question (very) thinly veiled anti Semitism, it is eerily reminiscent of the darkest era of human history, and it sets a hideous precedent of blaming the victim. Second, the attacks in Paris are truly heartbreaking. I know that people are valid in their anger towards this world that chooses to demonize Israel, while Israelis and Jews would never brutally murder over 150 Frenchmen in the name of Judaism or Israel. I know there is justifiable disgust in a world that excuses violence against innocent Jewish Israelis, but denounces it against innocent French. I get all that. But that's not my bag. I can only think that as tolerant as the liberal French are (too tolerant maybe for a crazy right-winger like myself), it is much more out of trying to see the good in humanity, and less due to willfully ignoring the bad. In trying to see the good, one often has to ignore the obvious bad, but I don't think anyone "deserved" this or "got what was coming to them." No one deserves to be murdered at a rock show by a merciless jihadist on a religious crusade. The third, and most personal thread is something that happened to me this past shabbat.

I was having a nice lunch with new friends, when talk turned to a mutual acquaintance who I like very much but have clashed with ideologically on political issues in the past. I therefore try as hard as possible to keep the peace when I see her and stay on neutral topics (weather, movies, Israeli bureaucracy, etc) She often steers the conversation back to controversial topics, and, let's be honest, I don't back down. Still, I would tell anyone who asked that I like her and we get along just fine. My friend then tells me that she mentioned to a group of people that she has unfollowed me on Facebook. For those of you who don't know, that means she and I are still friends on Facebook, but she isn't alerted to anything I post or comment. While this fact irritated me, as she is someone who always crows about "hearing both sides" and "loving thoughtful debate", I had to be fair- I had unfollowed her myself many months ago. But what came next really shocked me: "Yeah, she said she can't follow you because of all the racist things you post." I was absolutely floored. Shocked. Disgusted.

For those of you who aren't my Facebook friends, I post pretty regularly. Usually it's photos of me and my friends and family, scenic shots of the gorgeous landscape of Israel, and sometimes funny or heartwarming videos. On the rare occasion when I post something political, I try and keep it neutral/skewing pro-Israel. I have many liberal/Left friends on Facebook who I a) don't want to fight with b) don't want to aggravate (although why my different views bother the open-minded community so much is, again, curious) and c) don't want to alienate. So instead of posting something anti-anyone, I try and post things that are pro-Jewish/Israel. That way, I bring light onto my Facebook world instead of darkness. Or at least that's what I believed. But here I am, being called a "racist", a term I don't take lightly or shrug off, because I choose to defend Jews and Israel above anyone else. And you know what? I don't even feel a little bit bad about it. But I am horrified that my open-minded, peace-loving and coexistence-spouting friends see my Jewish pride as an excuse to label me a racist. I personally don't think it's brave or noble to throw your own people under the bus to make an ill-informed political statement, but if you want to do that, it's your right.  I take offense to being called a racist for rightly calling Islamists, who kill in the name of Islam, terrorists. I am not calling all Muslims terrorists. But I am also not under the delusion that a terrorist's faith plays no role in the actions they take. I take offense to being shamed for defending Jews who live in Judea and Samaria and not bowing to the insane belief that they are the cause of Palestinian aggression. And I will not be silenced and denounced as a "racist" for telling the anti-Zionists of the world, whether in real life or on social media, that their hatred of Israel is modern-day- anti-Semitism and I will not tolerate it.

So let's tie these three seemingly disparate pieces together to try and make sense of a world gone mad- literally. When the world turns a blind eye to terrorism in their midst and then trains that blind eye on punishing the one free democracy in the Middle East with a boycott focused on destroying their economy- there is a problem. When defense of your own people at the expense of a different culture bent on destroying them is seen as "racist"- there is a problem. When you can not label the terror organizations that stare at you in the face, daring you to call them by name, screaming their desired goals as they go- when you have to instead blame poverty, and lack of education, and climate change, and settlements, and Islamophobia and everything except what the terrorists are actually telling you is the reason- there is a problem. And if you purport to be the one who believes that "everyone's opinion matters" and "everyone is entitled to their views" and you then silence the views that conflict with your own- there is a problem.

Everything is interconnected, and I'm not saying my views are the only valid ones (although they are unapologetically valid to me), but we need to connect the dots. We can't live in a vacuum or with our heads in the sand (2 cliches in one sentence- oy!) We need to be real, and we need to be kind. Even me, in my crazy- Zionist- right-wing-extremist mindset knows that these 2 characteristics are in no way in conflict. Be kind, look for the good, help others and don't judge. But be real, too. When people say things, believe them. And when they do things, don't spend your whole day justifying and equivocating. Be aware, and be safe. My heart is with the victims of terror in Paris, and everywhere in this world terror spreads. And of course, first and always, with Israel. Am Yisrael Chai. 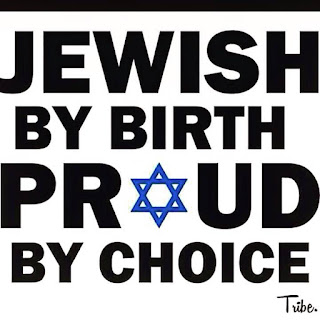