Today Azerbaijan celebrates the 100 anniversary of the Azerbaijani army

By ARYE GUT
Advertisement
This year the Azerbaijani Army marks its 100 anniversary, marking the establishment of one of the most powerful armies of the East. The history of the modern Azerbaijani army dates back to the Azerbaijan Democratic Republic in the early 20th century. In XIX century and the early of the XX century dozens of well-known military leaders representing the people of Azerbaijan were formed. The first proposal on the establishment of a national army in Azerbaijan was done after the collapse of the Russian Tsar Empire, at Congress of the Caucasian Moslems, held in May 1917 and the decision was adopted at that Congress to set a special bureau to begin formation of Moslem regiments. Shortly after this, in October of the same year at the 1st Congress of Azerbaijani Turkish Federalists Democratic Party - Musavat the formation of the national army was discussed. In November 1917, the Commissioner for the South Caucasus republics passed a resolution on the establishment of the national military corps in the Caucasus. Formation of Azerbaijani Corps was assigned to the general Aliaga Shıkhlinski. Unlike Armenia and Georgia, this job was going very slowly in Azerbaijan. As a result, when the Azerbaijan Democratic Republic was proclaimed on May 28, 1918, there was just one military unit of 600 staff in the country, composed of former Muslim volunteers groups. Of course, with this small military force to defend the independence of Azerbaijan and to prevent the attack of the Soviet-led Shaumyan (Baku Commune) on Ganja was difficult. In such situation, the only country that could help Azerbaijan was Turkey. For this purpose, the chairman of the Council of Ministers of the Azerbaijan Democratic Republic Fatali Khan Khoyski asked the government of Turkey on military assistance.

Related image The history of the modern Azerbaijan army dates back to  Azerbaijan Democratic Republic in 1918, when the Armed Forces of Azerbaijan Republic were created on June 26, 1918. First de facto Minister of Defense of ADR was Dr. Khosrov Sultanov. When the Ministry was formally established, Gen. Samedbey Mehmandarov became the minister, and Lt-Gen. Ali Aga Shikhlinski his deputy. Chiefs of Staff of ADR Army were Maj-Gen.Habib bey Salimov .

The military expenses of State budget of the Government of ADR for the year 1919 budget was 24 percent and it was intended to establish a national army of 25 thousan people in the same year. Defense Minister General Mehmandarov in his letter sent to the Council of Ministers on April 2, 1919 had shown importance of military training of the people of Azerbaiajn in the spirit of national patriotism basing on the famous military histtory of Azerbaijan people and heroism.
In late 1919, the Azerbaijani army consisted of two infantry and one cavalry divisions. In addition to two artillery batteries and special division with light guns were created in Ganja city. The army at that time consisted of three armored trains, 4 military aircrafts, 6 armored vehicles, etc. At the beginning of 1920, it was planned to bring the number of personnel of the army to 40 thousands. It was planned to recruit young people aged 19-24 to serve in the military. It was planned to purchase 5 tanks, 12 hydroplanes, 6 airplanes, 9 armored cars, etc. to strengthen the army. In September 1919, the British military correspondent Scotland Liddle, visited Baku wrote in his impressions: I was told that I would met with chaos here, but I did not see any chaos ... along the way, we met with the hundreds of young soldiers of Azerbaijani army, they were not those soldiers, that I saw two years ago. They even were unlike as a month before. Azerbaijani army was formed rapidly, quickly got the necessary shape. Azerbaijan had understood that the undisciplined army simply could not survive. The iron discipline dominates in Azerbaijan, a discipline that was not even in Russia.
Major-General Javad bey Shikhlinski, General Mohammed Mirza Gajar have led the struggle of people against Army XI in Ganja. From generals Minister of defense Khosrov bey Sultanov, Minister of Internal Affairs Behbud Javanshir worked in the 1st and 2nd Cabinet of government of Azerbaijan Democratic Republic. Khosrov bey Sultanov worked as governor-general of Garabagh in 1919. The official researches show that, because of Bolshevik-Dashnak terrorism 12 generals, 27 colonels and lieutenant colonels, 46 captains and 266 officers served in 1920 in the Azerbaijan National Army have been killed. After restoration of state independence of Azerbaijan for the second time by the decision of the Supreme Soviet dated on September 1991 the Ministry of Defense and by decision dated October 9 the Armed Forces of Azerbaijan was established. By Decree of Azerbaijan President dated September 18, 1992 October 9, was declared as the Day of Azerbaijani Armed Forces. However by presidential decree dated May 22, 1998 that day was annuled to be Day of Armed Forces and instead June 26 was declared as Day of Armed Forces.                  Azerbaijan lands were defended by scattered volunteer bands only. There were various armed groups serving personal interests. It all was ended only after return of Heydar Aliyev to the power in 1993. As Commander-in-Chief of the Armed Forces Heydar Aliyev achieved rebirth in military sphere too. Annulling armed units acting under name of local self-defenses and volunteer battalions he created the regular army in the united command system. The Commander-in-Chief visited the battle front and met with fighters. In early 1994, successful military operation was carried out against the enemy in the direction to Horadiz settlement of Fuzuli district. After the ceasefire declared on May 12, 1994 the process towards formation of the modern regular army was started in Azerbaijan.
Along with stability, dynamic economic development, formation of strong army is one of major factors characterizing modern Azerbaijan. Growth of economic power of Azerbaijan during the past 15 years has contributed to solution of social issues and consolidation of the national army. Expenses allocated from state budget to military field have been lifted for many times that in its turn lifted the potential of army to high level in all directions. Components of the Armed Forces of Azerbaijan – Defence Ministry, military units of State Special Protection Service, Internal Troops of Home Affairs Ministry, State Frontier Service, National Security Ministry, Emergency Ministry are in the phase of high progress due to huge care and attention by the Azerbaijan leadership. Military education and military healthcare that are of big importance nowadays are intensively developing too. Taking into consideration the Armenian occupation and continuation of the war the state of Azerbaijan continuously increases its military strength and professionalism of military personnel.

President Ilham Aliyev regularly visits military units, meet with soldiers and officers serving in the battlefront and it is one of main factors strenthening of Azerbaijan Army. Military superiority of Azerbaijan over Armenia has not been achieved immediately. Over 15 years an Azerbaijan leadership has functioned upon the principle that economic potential and strong army are the main among the factors defining success and development of every country. The modern technologically strong army plays essential role in the strenthening of independence and changing the country into the geopolitical pivot center in the region.President  Ilham Aliyev has very clearly expressed the substance of the policy the state of Azerbaijan conducts in this course: " In all spheres we are trying for development of processes ongoing in the Army. Huge work have been done over the past years to strengthen logistics, lots of technical equipment, modern weapons purchased. Armenia is unable and will not be able to compete with us. The historical justice, international law is on our side. We have economic and military strength and spirit of patriotism. The Aprli victories, the Nachichivan victories strengthen the patriotic spirit of our army and our people and once again instill the absolute belief in the Azerbaijan people that today the Azerbaijan army is capable of fulfilling any task and is ready for this"- stated Azerbaijan President Ilham Aliyev.

Of course, to strengthen its military potential Azerbaijan should effectively and properly use its rapidly growing economic resources. Even forces and persons denying everything confess that stability, dynamic development and formation strong army are main features of modern Azerbaijan and these features are firmly connected. Strong economic development, growing revenues bring to increase of military expenses yearly. Only for last 5 years these expenses have increased more than 7 times.However, actions towards army construction are not limited with use of economic resources only. Azerbaijan constantly strengthens its army, lifts professionalism of military personnel, increases military power. Close and fruitful cooperation with NATO aims to rapidly improve formation of army, modernize the Armed Forces and conform them to the modern standards. Certainly, the major objective is to restore territorial integrity of Azerbaijan, release Garabagh and all regions occupied by Armenians of enemy. A lot of significant results have been achieved in the way towards this decisive phase and this process is continued. Observations show that Azerbaijan has entered the phase to change its potential military superiority into the reality.    Azerbaijan’s military superiority over Armenia is more and more obvious, RBC reported citing the Center for Analysis of Strategies and Technologies, which is a leading Russian research organization. According to the authors of the report, the manpower of the Azerbaijani Armed Forces in 2016 reached 126,000 people. However, according to the report, the manpower of the Armenian army is about 45,000 people from 2002 to the present. 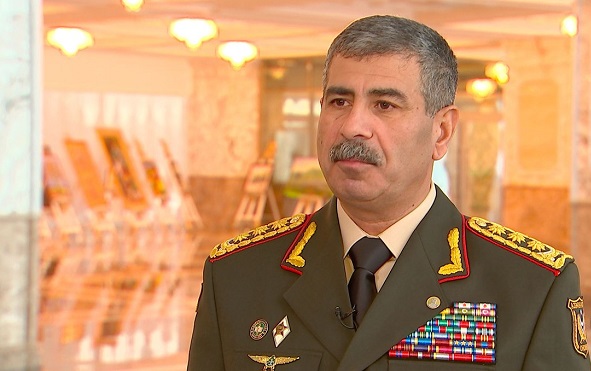 Colonel-General Zakir Hasanov said. He made the remarks in anticipation of centenary of the creation of the Azerbaijani Armed Forces to be celebrated June 26, sharing his vision of the priorities of the Azerbaijani army, as well as talking about the ongoing successful reforms, achievements and forthcoming tasks.
“The success achieved in Agdere, Fizuli and Jabrayil directions in April 2016, and also in May this year in Nakhchivan, became possible as a result of comprehensive reforms conducted thanks to the care and attention given by the supreme commander-in-chief of our army,” Hasanov said. “Both historical moments that I noted clearly demonstrate that the Azerbaijani army exceeds the
Armenian army in terms of combat readiness, high fighting spirit, moral and psychological state and professionalism.”
He noted that Azerbaijan buys modern combat aircraft, combat and military transport helicopters, artillery units, armored vehicles, communications equipment, unmanned aerial vehicles from various countries. “At the same time, our army is equipped with military products manufactured by the facilities of Azerbaijan’s Defense Industry Ministry,” Hasanov said. “In addition to our partners such as Russia, Belarus, Ukraine, we are also building up our military potential in cooperation with Turkey, Pakistan, South Africa, Israel and many other developed countries.”in cooperation with Turkey, Iran, Pakistan, South Africa, Israel and many other developed   countries.”
Azerbaijan will continue to support the efforts of the international community aimed at restoring peace and stability in Afghanistan
Resolute Support is a NATO-led training, advisory, assistance, and counter-terror mission in Afghanistan, which began in January 2015. It is a follow-on mission to the International Security Assistance Force (ISAF), which was completed in December 2014. The peacekeeping contingent of the Azerbaijani Armed Forces has been serving in Afghanistan since November 20, 2002.
Currently, 120 servicemen of Azerbaijani Armed Forces are participating in the NATO Resolute Support mission in Afghanistan. Azerbaijan has several times made substantial donations to the Afghan National Army (ANA) Trust Fund. Moreover, Azerbaijan supports Afghanistan on its path of reforms towards integrating into regional and global economy. Furthermore, Azerbaijan allowed the NATO planes carrying non-combat loads for a mission in Afghanistan to fly through Azerbaijan’s airspace and to use the country’s airports. About 40 percent of all cargo destined for the NATO mission in Afghanistan pass through Baku.
Arye Gut
Political Analyst
Advertisement
Subscribe for our daily newsletter