Why Azerbaijan is important for American Jewish Lobby?

By ARYE GUT
Advertisement
Tomorrow Jewish people in the entire world will celebrate Rosh Ashana. The Jewish New Year, Rosh Hashanah actually means “Head of the Year.” Just like the head controls the body, our actions on Rosh Hashanah have a tremendous impact on the rest of the year. It is a day of prayer, a time to ask the Almighty to grant us a year of peace, prosperity and blessing. However, it is also a joyous day when we proclaim G‑d King of the Universe.

Every year President of Azerbaijan Republic Ilham Aliyev, the strategic partner of Israel applied to Jewish community and congratulated with this holy Jewish holiday. "I cordially congratulate you on the occasion of the New Year's holiday of the Jewish people - Rosh Hashanah, I convey my most sincere wishes.

Azerbaijan, located at the junction of civilizations, is today one of the unique places where multicultural traditions are preserved, there is an atmosphere of mutual respect and trust between individual religions and cultures.

Historically established and living in Azerbaijan, the Jewish community occupies a peculiar place in our society. It is significant that our Jewish citizens take a close part in all spheres of the country's life, demonstrate an active civil position in the further strengthening of our state independence, bringing to the world community the truth about Azerbaijan.

Rosh Hashanah is a holiday that embodies renewal, spiritual purity and solidarity. May this special day to the Jewish people, bring each of you a good mood, happiness and joy to your families, "– has written the President in his message of congratulations to Jewish community of Azerbaijan.

Executive Vice Chairman and CEO of the Conference of Presidents of Major American Jewish Organizations Malcolm Hoenlein said that the American Jewish organizations attach great importance to cooperation with Azerbaijan. Recalling his meeting with President Ilham Aliyev in Baku, Malcolm Hoenlein noted that Azerbaijan as a modern and rapidly developing country made a great impression on them. He hailed good relations of cooperation between Azerbaijan and US, as well as between Azerbaijan and Israel.

President Ilham Aliyev pointed out that many of leaders of the Jewish organizations participating in the meeting visited Azerbaijan, and they are aware of the country`s achievements. The head of state stressed the importance of spreading information about ongoing development processes in Azerbaijan. President Ilham Aliyev said relations between Azerbaijan and US are successfully developing, and praised the development of Azerbaijani-Israeli ties.

Leaders of the American Jewish organizations thanked President Ilham Aliyev for the conditions created for the Jewish community to live in an atmosphere of mutual understanding and peace as other communities in Azerbaijan. They lauded stability and security in Azerbaijan, and praised the country's commitment to policy of multiculturalism and tolerance.

At a meeting with Azerbaijan President Ilham Aliyev, Lauder said the situation of Jews in the former Soviet republic, a predominantly Muslim nation, was very good and he thanked the Azeri head of state for it.

President Aliyev underlined what he said were “excellent relations” of his administration with the Azeri Jewish Community, as well as with the State of Israel and with international NGOs such as the World Jewish Congress.

Ilham Aliyev said both Ashkenazi and Mountain Jews had been living in the country for more than two millennia, and all religious and ethnic communities in the country were living in harmony with one another.

WJC Vice-President Yuri Kanner, who is also president of the Russian Jewish Congress, said after the meeting: "This was a very open and substantial discussion of all key issues of concern to Presidents Aliyev and President of WJC Ronald Lauder.

“It is important to understand the processes that happen here today, and to note that they constitute an example for other Muslim-majority countries. The success of this model of multiculturalism was noted by all participants.” 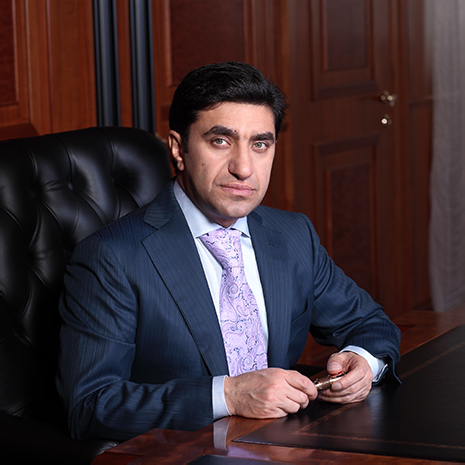 Image result for год нисанов
WJC Vice-President God NisanovWJC Vice-President God Nisanov declared: "I am very pleased that this meeting with President Ilham Aliyev went very well. Its importance for the Jews of Azerbaijan cannot be overestimated. For us, it is a great honor that the president of the World Jewish Congress is paying a visit to Azerbaijan. I hope that the delegation will have a chance to see with their own eyes and appreciate that Azerbaijan is a prosperous and flourishing country, and that there is no place for anti-Semitism. All Jews are welcome here." 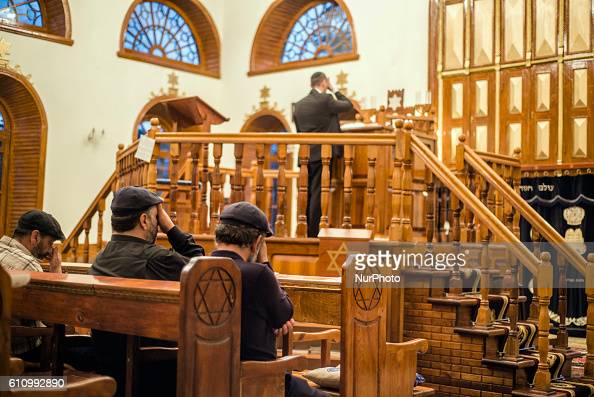 Related image
The ancient town of Krasnaya Sloboda (Guba) in northern Azerbaijan, said to be the only all-Jewish town outside of Israel, is the pride of Azerbaijan. In this region, Jewish and Muslim Azerbaijanis have lived harmoniously for centuries. Muslims and Jews are linked by many things…history, citizenship, friendship, experience, but also by the tragic events of 1918-1919 when the Armenian Revolutionary Party, an Armenian nationalist and socialist group also called Dashnak, massacred thousands of Jewish and Muslim Azerbaijanis.

Despite Armenia’s ethnic cleansing and aggression towards Azerbaijan, which includes occupation of 20 percent of its territories and one million refugees and Internally Displaced People, Azerbaijan is a true model of inter-civilizational and interfaith dialogue. Tolerance and multiculturalism are key foundations of the Azerbaijani society. Azerbaijan has made a concerted effort to create and foster the necessary political and social conditions for developing and strengthening the country’s traditions of multiculturalism and tolerance.

The State of Israel has repeatedly expressed its appreciation for Azerbaijan’s warm and unique attitude of President Ilham Aliyev, as well as the rest of the leadership of Azerbaijan towards the Jewish community. During his visit to Azerbaijan, President World Jewish Congress said me that he did not expect to see a powerful Jewish community in a Muslim country with a Shiite majority.

"There are no such precedents in the world. I think that the Krasnaya Sloboda is a great role model for other countries. Azerbaijan can be proud of its achievements in the area of multiculturalism. As a President of the World Jewish Congress, I highly appreciate the respectful and warm attitude of the Azerbaijani people and the Azerbaijani leadership towards the Jewish community and I want to express my sincere gratitude to the President of Azerbaijan" - said me Ambassador Lauder during his visit to Azerbaijan on September 2016. 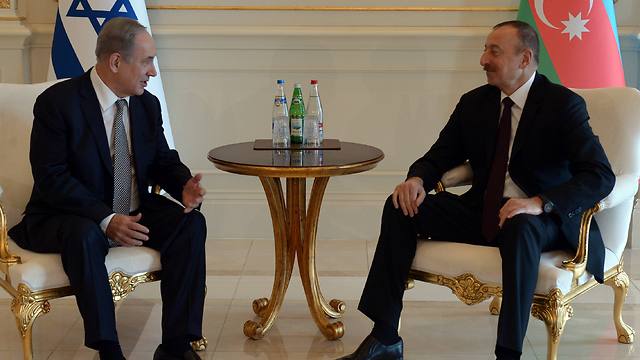 Image result for netanyahu and aliyev

The visit of the Israeli Prime Minister to Azerbaijan in December of 2016 was another testimony of strategic partnership between Israel and Azerbaijan. This visit was the only official visit of Israeli Prime Minister Benjamin Netanyahu to the South Caucasus region. This visit once again demonstrated that the political and diplomatic dialogue between the two countries is at the highest level of confidence, while the economic component and trade turnover are constantly growing.

25 years ago Israel counted on Azerbaijan in the South Caucasus, and this was the right strategic choice for all indicators. This cooperation of two small states located in an insecure geopolitical region has a great future. Of course, it worries third countries, which are equally unfriendly both to Israel and to Azerbaijan. And these countries want to damage mutual relations of Israel with Azerbaijan by all means. Israel highly values ​​friendly relations with Muslim Azerbaijan, which is a model of cooperation with a Muslim country. And we must preserve, develop and strengthen these relations so that no anti-Israeli and anti-Azerbaijani forces could harm them.

I am sure that all good and brother relationships between Israel and Azerbaijan have good and stable historical basis. I can give an example of the heroism of the Azerbaijani intelligence officer under the codename "Sadygashvili" (Hamza Djumshudoglu Sadigov). As part of the Soviet military intelligence service near Stalingrad, Hamza Sadikhov captured the closest associate of Hitler, General Johann von Roddenburg, who was particularly cruel and personally exterminated the Jews. This beast in the guise of a man was called the father of the "biological bomb" of Hitler, conducted experiments on Jewish children.

Hamza Sadygov the the savior of Jewish children

It was Hamza Sadygov who became the savior of Jewish children. Thanks to his courage dozens of Jewish families were saved from the true death. With this deed and heroism, Sadigov erected a monument of courage and immortality in the hearts of his grateful generations. And there are a lot of such heroes in Azerbaijan. But the Azerbaijani people are mainly modest, so the name of hero Sadigov, who fought against fascism and saved Jewish families, is very little known in the world as opposed to Armenia, where fascist generals and executioners like Dro and Nzhdeh had been glorified to the level of heroes.

We are all well aware that modern Armenia is the most mono ethnic country where chauvinism, nationalism, exaltation of fascists and anti-Semites became an integral part of the state policy of the current Sargsyan regime. It is worth emphasizing that the cult of these bloodthirsty fascists and anti-Semites is not carried out by some marginal political groupings, but behind these actions is the state, or rather the criminal leadership of the modern Republic of Armenia.

The fact that President of Armenia Serzh Sargsyan and former Defense Minister Seyran Ohanyan participated in the opening ceremony of the monument to the fascist and anti-Semite Gen. Garagen Nzhdeh once again confirm that they consider themselves to be real and genuine heirs of the Armenian fascist and anti-Semite Nzhdeh. I am sure that Armenian current president Serzh Sargsyan and former minister Seyran Ohanyan who committed a bloody massacre in the Azerbaijani town of Khojaly in late 20th century they are the successors of the Armenian fascist general Dro and Nzhdeh. Suffice it to remember Serzh Sargsyan`s words that ‘before Khojaly, the Azerbaijanis thought that the Armenians were people who could not raise their hand against the civilian population. We were able to break that stereotype’. And this really demonstrates that Serzh Sargsyan and his entire clan in the government of Armenia are genuine and worthy successors of Dro and Nzhdeh. The bloody act of genocide, which was committed with incredible brutality and barbarism in Khojaly, is one of the horrible tragedies of the late 20th century. Cruel and merciless scenes of that massacre will always remain a never-healing scar in the heart of Azerbaijan.

The State of Israel supports the just position of Azerbaijan and calls for the settlement of the Armenian-Azerbaijani Nagorno-Karabakh conflict only within the framework of international law and the principle of territorial integrity of states. In this complex geopolitical situation, support of Azerbaijan's fair position by such an important strategic partner and strong geopolitical actor in the Middle East as the State of Israel is very necessary and very important for the Republic of Azerbaijan.

However, the relationships between Israel and Azerbaijan, and Muslim Azerbaijanis and Azerbaijani Jews, cannot be explained away by simple mutual self-interest. Common values and a shared history permeate the modern relationship. Both countries are enriched by the human connections between them and a determination to live in diverse and religiously tolerant societies.