By CAROLINE IGRA
Advertisement
"Someone really ought to write a funny piece about Israeli road signs."

My husband and I were driving under the main Coastal Highway, towards Herzliya. The sign above us read: Hertsliya. This particular version was new to me.

"Really?" I said incredulously. "This is what they came up with?"

After more than two decades here it still amazes me to come across one outrageously spelled sign after another. I always wonder why there isn't one source responsible for making sure everything's right. It seems, instead, as if each sign is "edited" by whoever happens to be sitting behind the desk that day; irrespective of whether or not they know anything whatsoever about the English language.

My local town has taken an especially serious blow in this department.

About ten years ago I remember storming into the principal's office at the local elementary school; my son's third grade English notebook in hand. I slid it across the desk between us, open to the offensive page. We bent over together to take a look and there was written, in messy but still legible form, Qesariya.

"Qesariya" I read aloud; stretching out the syllables to lengthen the insult. "Is this really what the English teacher in your school is teaching the kids?"

She began to hem and haw, clearly understanding where this was going.

I continued: "Daniel explained to the teacher that this wasn't the way to spell Caesarea; that there was no such thing as "Qe" in the English language. Do you know what she responded?"

I have to admit that the principal looked not only exasperated but slightly depressed. She could guess what the teacher had responded and apparently was as sick of this ubiquitous Israeli plague as me.

I didn't feel like letting her off the hook and answered my own question:"She completely ignored his correct reference to the actual rule," I paused, letting my unsubtle comment regarding this teacher's knowledge of the English language sink in, "and cited her reliable source as none other than the exit sign for our town from the local highway.

I have to admit that although clearly not qualified to be teaching English, I mean, how basic is "u" after "q," my son's teacher was maybe, just a wee bit, justifiably confused. I have discovered at least six different ways that this town's name is spelled on signage within a five kilometer radius. These include the aforementioned Qesariya as well as Qesariyya, Kesariya, Kesarya and finally the basically correct: Caesarea and Caesaria. The differences between the last two are derived from a discrepancy between pronunciation issues raised by the fact that the letter "i" is incorrectly taught to sound like a long "e."

With this in mind, the principal should have tried to win me over (and calm me down) with a substantive counter claim such as: "If the transit authority can't decide how to spell it, what do you expect from our teachers?" Of course, the irony of that comment speaks for itself.

I wish I could say that Caesarea is the only victim of this blight but it's most decidedly not. I can cite Elat, Elot, and Eilat as well as Rishon LeZion, Rishon LeTsion and Rishon Lizzon to name only a few towns left bleeding on this particular battlefield. 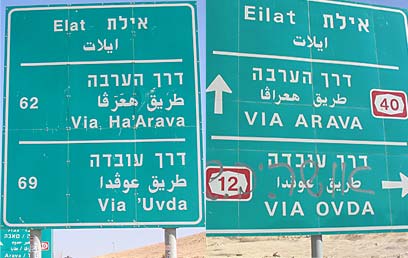 Jesting aside, there is a case to be made for some of this confusion. There are certain letters in the Hebrew alphabet which naturally create transliteration challenges. There is a tendency, for example, to make all "yuds" into "j's," creating a situation where you have Jaffa and Yaffa. Nevertheless, this doesn't excuse the fact that no one seems to be able to decide if it's Yafa or Yafo. In addition, there is a problem with transliterating a sound that doesn't exist in English, such as "ch". Not "ch" as in chocolate but "ch" as in the sound one makes when clearing one's throat. This issue results in understandable varieties on signage for towns such as Petach Tikva (see Petah Tikva). That being said, the effort to remain phonetically accurate does not justify spellings which seem more random than educated such as, in another bastardization of this particular example: Petach Tikwa.

I discovered one of my favorite misspellings, offensive in absolutely every way, on a recent trip along the foothills of the Gilboa. There it was, in white on green: Bet HaShitta. I don't remember who was sitting with me in the car but I do remember almost shrieking: "That doesn't work! Hasn't anyone noticed how that actually sounds if you say it out loud?" Luckily, someone from the kibbutz has; because their pickled products are clearly and correctly labeled, a far less embarrassing: "Beit HaShita." 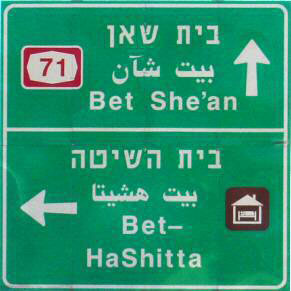 In conclusion I wonder, as I did while driving in Herzliya a few days back, whether it might just be possible to have one person responsible for determining how things need to be spelled; one reliable source who could make at least that little effort toward unification. Maybe, just maybe, the same effort could influence other areas such as, perhaps, local politics? I guess that's the million dollar question around here!