Part of the uniqueness of the excavations at Timna is that it is located in the desert, where the climate allows for exceptional materials. 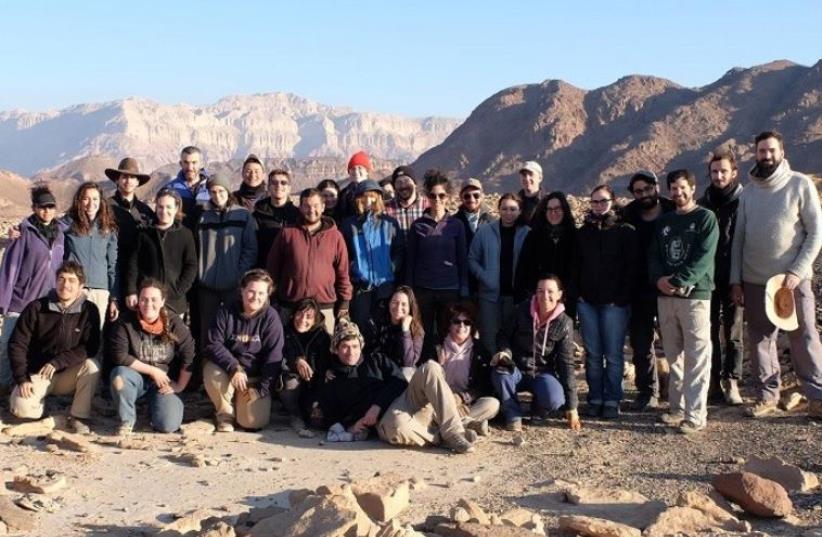 The Central Timna Valley Project team 2016
(photo credit: TEL AVIV UNIVERSITY INTERNATIONAL PROGRAM IN ANCIENT ISRAEL STUDIES: ARCHAEOLOGY AND HISTORY OF THE)
Advertisement
Recently, I had the opportunity to participate in an excavation at the site of Timna, the ancient copper mines of the Aravah. Located approximately 20 kilometers north of Eilat, Timna, also known as the site of King Solomon’s Pillars, is an extensive area where copper mining and smelting has been conducted for the last 3000+ years.The most recent excavations, led by Dr. Erez Ben-Yosef of Tel Aviv University, began in 2012, and run every year during the winter. The reason it happens during the winter is because it is located deep in the desert, where work conditions in the intense heat of the spring and summer months are very difficult.Part of the uniqueness of the excavations at Timna is that it is located in the desert, where the climate allows for exceptional materials, such as textiles, whole fruit seeds and copper smelting technology, which are rarely found on excavations. Other finds include an Egyptian temple to the goddess Hathor (patron of miners) and extensive networks of buildings and materials dedicated to the production of copper. Recently, some of these amazing finds were showcased in the international news.

A day in the desertA typical day of excavations at Timna begins at 5:30am. This year the focus of the excavations was on two areas, Site 34 (Slaves’ Hill) and Site 35. Both have many above-ground archaeological features, including walls, buildings, and slag mounds. Slag is the byproduct and refuse of the smelting process, and is found in abundance at Timna.Our group was split between the two sites, and on different days we would rotate who was working at each site. We worked for several hours in the early morning, taking a quick breakfast break around 10 a/m. At 2pm we finished excavating and returned to camp for lunch. After lunch and a quick siesta we worked on processing the finds. At this site, processing usually entailed a lot of sifting of the soil that was excavated. Since we are in a desert, many materials are preserved, but some of them are extremely small. By sifting the dirt we are able to discover finds that are impossible to identify in the field.

Findings and activitiesSome of the exciting things we found this season were tiny fish bones, beads, string, and seeds. Once the earth was sifted and sorted into different size grains, it was packaged into containers for easy shipping to laboratories all over the world to places such as Jerusalem, Tel Aviv, the USA, and Germany.Every evening, a different member of the Timna excavation community taught a lecture about archaeological sciences. The lectures included topics related to optically stimulated luminescence (International MA program alumni, Craig Smitheram), methods of archaeomagnetic dating (Ilana Peters), uses of textiles (International MA program alumni, Vanessa Workman), assemblage and use of ground stones in copper smelting (Dr. Aaron Greener), and organic remains (International MA program alumni, Mark Cavanagh). From such lectures and discussions, we not only learned about the excavations, but also about the methods that directly influence the analysis of the archaeological material at Timna and the results that continue to be applied today.The mystery of the minesOne of the biggest questions surrounding Timna is the date at which the mines and smelting sites were in use. The original view was that they were founded by King Solomon during the 10th century BCE, but excavations and early analysis indicate a large presence of the Egyptians, which led to the assumption that the mining and smelting occurred during the Late Bronze Age, approximately during the 13th century. The recent excavations conducted by Dr. Erez Ben-Yosef, however, show that the issue is more complicated, and that there may indeed have been activity at the site during the 10th and 9th centuries. With the use of the above scientific procedures the team hopes to further clarify these issues.In addition to the time we spent working with the archaeological material, we also spent one day conducting a survey over large areas of Timna that have yet to be excavated. During those several hours, the team walked in lines with our eyes peeled to the ground, looking for surface finds. This was when we found the most pottery and ground-stone tools. Conducting these surveys gives Dr. Ben-Yosef and future researchers a better idea of where they are more likely to find good sites to excavate. That afternoon, Omri Yagel gave us a tour of the entire area.  We were shown the actual mines from which the copper ore was taken, given a detailed overview of Slaves’ Hill, and were led through some of the more touristy sites like Solomon’s Pillars, the Hathor Temple, and Egyptian Rock Carvings.I really enjoyed my time excavating at Timna. It was the first proper excavation season I had attended in over two years, and I was glad to be back in the field. I met some really important and professional people, made some great friends, and learned a lot about archaeological science. I am so thankful to have had the opportunity to work with Dr. Ben-Yosef and his team, and I am looking forward to coming back for the excavations next year!