Masada: the history, the legend, the archaeology

“It was good to be the king” was a phrase uttered multiple times by all. 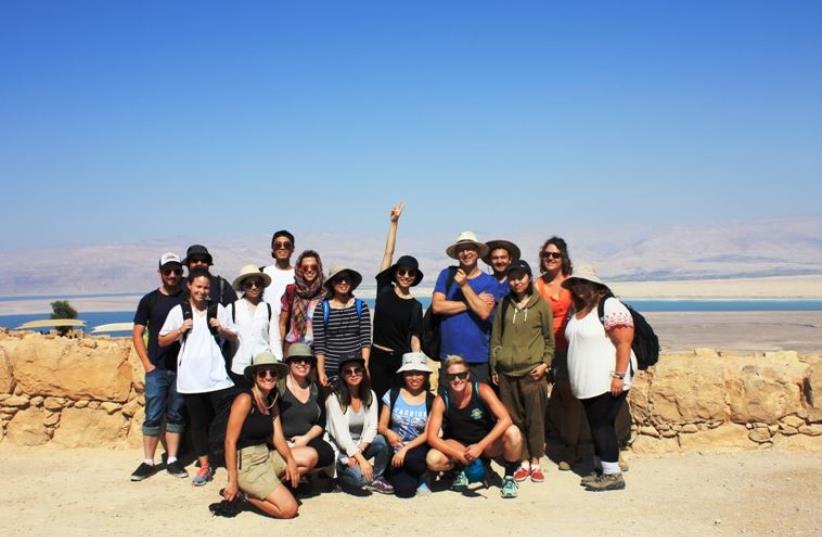 The International MA students at Masada
(photo credit: TEL AVIV UNIVERSITY INTERNATIONAL PROGRAM IN ANCIENT ISRAEL STUDIES: ARCHAEOLOGY AND HISTORY OF THE)
Advertisement
One of the most impressive tours we’ve experienced this year was without a doubt our field trip to Masada, the famous desert stronghold next to the Dead Sea, which was led by the esteemed Prof. Guy Stiebel, the director of excavations at Masada. As director of this site, Prof. Stiebel was able to give us a fascinating and in-depth tour of the site with both historical and excavation related stories.Before ascending the mountain, Prof. Stiebel taught about the previous excavations at Masada and the formation and construction of the facilities meant to promote it. Masada is Israel’s first World Heritage Site recognized by UNESCO, and thus receives special treatment as an historical location. Prof. Stiebel then discussed the discovery of Masada by Israeli archaeologist Yigael Yadin, and explained the importance of the site to the people of the young state of Israel. He discussed the ongoing struggle between archaeology, preservation and tourism, and showed us some of the finds that were discovered and are now on display in the halls of the visitor’s center.One of the interesting notes that Prof. Stiebel shared was that while the findings from the excavations were not exciting (no fabulous luxury items, figurines, or other groundbreaking items were discovered), the context of the site as the location of the last days of the Great Revolt provides an important snapshot into the daily lives of the community of rebels that defied the Romans for over 6 years. Cooking pots, for example, were discovered intact and still sitting on the stove, giving the impression that the people making dinner suddenly were summoned to some critical event outside from which they never returned.King Herod’s desert palaceFor many tourists the exploration of Masada begins before dawn, when they wake up very early to begin a long hike up the side of the mountain. For us, however, saving time was important, so we took the cable car up to the top. On the way up, Prof. Stiebel explained the geography and geology of the site, how the mountain was formed, and its strategic importance for King Herod the Great and later conquerors.Once we arrived at the summit, Prof. Stiebel explained the structure of his tour. Unlike many tour guides who focus on the story of the Jewish Revolt and the rebels who died there, Prof. Stiebel spoke mainly about King Herod,the constructor of the fabulous structures and palaces. Guy explained the layout of Masada, with its many palaces, storerooms, and bathhouses, and took us to see many of them. He then showed us King Herod’s own bedchamber, and explained how pieces of a bed, similar in structure to the luxurious couches of Rome, were discovered there. At the top patio overlooking the Northern Palace, Prof. Stiebel explained how King Herod welcomed his guests to his palace, dined with them and then invited them to his bathhouse. He had the finest and most expensive foods shipped to him in the desert, such as wine and fish sauce from the Caesar’s own estates in Spain and apples from Italy. He showed us the elegant frescoes that decorated the walls of Herod’s buildings, which were painted by esteemed Roman painters themselves. These were just some of the marvels presented to us at King Herod’s luxurious desert palace. “It was good to be the king” was a phrase uttered multiple times by all.

The lives of rebelsAfter we basked in the glory of King Herod’s wealth, our tour shifted to discussing the daily lives of the community of rebels that lived there during the Great Revolt. Unlike the popular image of zealots grandly defying the Roman Empire, the picture of life atop the mountain is more humbling. Hundreds, if not thousands, of refugees from all walks of life flocked to the mountain, especially after the destruction of Jerusalem in 70 CE. Many different groups called the summit home, from farmers and bakers, to Essenes and priests. Some of the inhabitants were even known by name, and by where they lived and worked.Prof. Stiebel brought us to a building, whose identity at first troubled excavators, until it was discovered that it was a bakery. The large oven, similar in structure to large stone ovens used for baking pizza today, could produce hundreds of loaves of bread in just 2 minutes. The owner of the establishment was named Josephus, or Yehosef in Aramaic. His house was later found next to the wall. Next to the bakery was another building that confused archaeologists, but today  is believed to be a laundry facility. Imagine a family of refugees bringing their clothes to be washed and going across the street for freshly baked bread!Concluding with the siegeWe ended our tour with Prof. Stiebel discussing the end of the Revolt and the conquest of Masada by the Romans. We saw the site where the Roman siege ramp reached the top of the mountain, leading to their discovery of the mass suicide. In the visitor’s center at the foot of Masada we entered the dimly-lit museum, which tells the stories of the life during the revolt and of the siege. The museum ends with a display of the ostraca lots discovered during Yadin’s excavations. These sherds may identify the officers of the rebels who were tasked with implementing the mass suicide. Though important, the ostraca are controversial, as not everyone believes that they are the famous lots described by Josephus Flavius.Our tour of Masada was an exciting day packed with new information and experiences. Our time at Masada was a unique experience not available to most visitors to the summit. Thank you to Prof. Stiebel for sharing with us his second home and all the hospitality it could offer!