Exactly one year ago I received an email from Tel Aviv University, and in an instant, my coming year, career and life was changed! 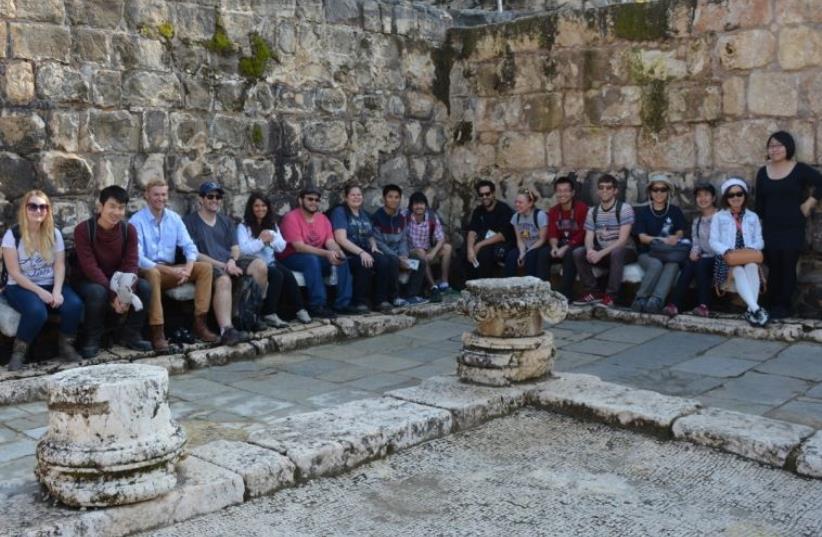 Azekah exacavation group photo
(photo credit: TEL AVIV UNIVERSITY INTERNATIONAL PROGRAM IN ANCIENT ISRAEL STUDIES: ARCHAEOLOGY AND HISTORY OF THE)
Advertisement
The school year has just finished, and I’m left reflecting on what a transformative year this has been. Exactly one year ago I was staying with friends (that I met on an excavation in Israel!) in an apartment in Amsterdam when I received an email from Tel Aviv University, and in an instant, my coming year, career and life was changed!I had been admitted into the university’s International Program of Archaeology and History of the Land of the Bible, giving me an excitement I can only imagine to be shared with those admitted to Hogwarts. Twelve months later, I am writing this post while sitting on my bed at Kibbutz Galon, where we stay for the Tel Azekah excavation, which all students of the program attended this year.Welcome to TAUOur classes consisted of 17 students who flew into Tel Aviv from different parts of the world, such as the USA, China, Puerto Rico, Guatemala, Sweden and, in my own case, Australia. We were welcomed to the university by the staff within the department who we all now know so well, and have become good friends.Courses for the first semester included Egyptology, the ancient Hittite language, an intensive period-by-period program closely examining the end of the Bronze Age through to the end of the Roman Period, and the beginning of two year-long seminars; one specifically designed to teach us how to use the bible as a historical document, and another examining the origins of the ancient kingdoms of Judah, Israel and their surrounding kingdoms of Aram, Ammon, Moab and Edom (known as a study of state formation).The highlight of the semester, however, were the tours we had each month, which had us trekking up and down the country, walking the paths of the ancients and visiting their lost cities, including Beth Shean where our entire class was able to ‘sit’ where the ancients ‘sat!’

Second-semester changesFollowing a nice ‘restful’ break, during which some of us decided to spend excavating in either Jordan or Israel, we were right back into our study. Included in our repertoire of studies for the second semester were classes on pottery, object and small finds recording, the archaeology of Transjordan, the historical and archaeological background of Tel Azekah, and a new seminar on the archaeology of Jerusalem, which was taught by guest lecturer, Prof. Ronny Reich. Prof. Israel Finkelstein also joined us this semester in our study of state formation. This is the great advantage of this program – great courses, lecturers, touring and exposure to some of the greats of archaeology and biblical studies about Israel, within Israel and by Israelis.Summer excavating – Tel AzekahWith the close of the second semester, our class was again gathered on a bus along with students from Australian, German, American and Czech universities, but this time headed for Tel Azekah for 4 weeks of excavation. This was the ideal culmination for our year of study. Azekah gave us the chance to work in the field and to finally grasp how the delicate and fragmentary nature of archaeological data is gathered. Furthermore, words like ‘stratigraphy,’ ‘locus’ and ‘context’ suddenly had a very visual meaning. Most importantly, however, the class that had known each other for an entire year, had studied together, slaved in the library together, were now working together swinging picks and hoes during the early hours of an Israeli summer morning – a bonding experience one must participate in in order to fully understand and appreciate.What’s next for me?

Tel Aviv’s program exposes you to the world’s best scholars in the fields of archaeology and biblical studies – and opens doors for any committed student. Opportunities afterwards include employment and master's and PhD studies, as well as future excavation opportunities. Where this degree takes you is really up to you. Prior to this program, I was a mechanical engineer working in Australia. After this program, I will be returning to Tel Aviv University for another year to complete a master’s thesis, hoping to be on track for a new career (and life!) as an Ancient Near Eastern Archaeologist.

Where could this program take you?To give an idea to anyone who is interested in the program, here is a lesson in history once presented by the head of the program, Oded Lipschits:“In a very small cuneiform tablet discovered in the ancient city of Babylon, we found that the King of Babylon, Nebuchadnezzar came to URUYehudu (the city of the Jews) in the second day of the month of Adahu, which is exactly the 16th of March, 597 BCE. He conquered the city, caught the king, took with him to Babylon thousands of Jews, and then nominated in Jerusalem a new king.Now if you open the second book of Kings in the Hebrew Bible, you will see a story that the King of Babylon came to Jerusalem and he captured king Jehoiakim and took him to Babylon. He deported ten thousand Jews and nominated King Zedekiah, the uncle of Jehoiakim.
In many archaeological excavations conducted in Jerusalem, signs of the Babylonian destruction were discovered – and this is the secret of the program conducted here. What we endeavour to do is to take archaeology as a first stand, biblical studies as a second stand, Ancient Near Eastern inscriptions as a third stand, and to try and create above it the history of the biblical period.”In sum, this program is designed specifically to give the students and participants the tools and knowledge to assess the bible, a variety of other ancient texts, historical accounts, and archaeology and to reconstruct an accurate history; one that encompasses all of these individual elements to understand and evaluate what really happened in this fascinating, ancient land so many years ago.