How can a bunch of dancing Israeli Eurovision fans become a European phenomenon? If you ask the 12 Israeli members of “Eurofalsh,” the secret is true love: a true friendship between them, and a shared love for the Eurovision Song Contest.

Tonight, and every night this week, they will take the stage in Vienna, behind the scenes of the Eurovision Song Contest, lipsyncing and reenacting every Eurovision song ever, in the “Euroclub,” the official hang-out of the 37 delegations from all across Europe.

They have a documentary feature based on them; Disney heroes cartoons were made of their faces by fans; When they take the stage every Sunday on “Eurovision Night” in Tel Aviv they have fans who come to see them from all over the world, documenting performances with their phones like in pop star concerts; Eurofalsh is reliving the dream of everyone’s favorite Eurovision song.

“We’re lipsyncing on stage, and perform the exact routine from the Eurovision stages throughout the years,” explains Eran “Luna,” a fashion designer from Tel Aviv, who co-leads the group together with Miki Israeli, a teacher from Haifa.

“This is why we’re called ‘Eurofalsh’ [falsh=’false’ in Hebrew slang],” adds Miki, “we are actually imitating the original performances, but with a twist. We add a humor element, whether in extreme movements or facial expressions.”They perform every Sunday on “Eurovision Night” at Tel Aviv’s most famous gay bar, Evita, and have been doing so officially since 2004. “Tourists come and tell us that they are booking their flights according to how many Sundays they’re going to stay in Israel and come see us,” Miki says, “people tell us ‘I booked my flight to arrive on Sunday and to leave the next Monday morning so I’ll get to see you twice.’”

Miki (left) and Eran, co-leaders of the band 'Eurofalsh'

A few years ago, a Danish Eurovision fan saw them perform in Tel Aviv, and when his country won two years ago and he was chosen to produce the “Euroclub,” he knew that there would be no one else who could get the party going more than Eurofalsh. “We were invited to Denmark to perform last year, and we took the stage every day for a week which was amazing,” says Eran, “and this year the Municipality of Vienna, which is responsible for the events in the city during Eurovision Week, has invited us to do it again.”

It started over a decade ago, surprisingly, with the song “Od Nagia,” that never made it to Eurovision, but finished 3rd in the 1985 pre-selection contest. A bunch of Eurovision fans randomly started doing the original routine for the song, and for fun started practicing and mimicking exact performances of other Eurovision songs. “I knew the routines since I was a kid. I used to sit in front of the VCR and learn from the TV,” says Miki, who was one of the first people to join the group.

The rest became a part of Tel Aviv’s vibrant gay life’s history. ‘Eurofalsh’ made its official debut performance at Tel Aviv’s Theater Club in 2005 and since then European tourists who come to Tel Aviv are surprised to see songs from their countries, in their own language, performed exactly as they were on the Eurovision stage. 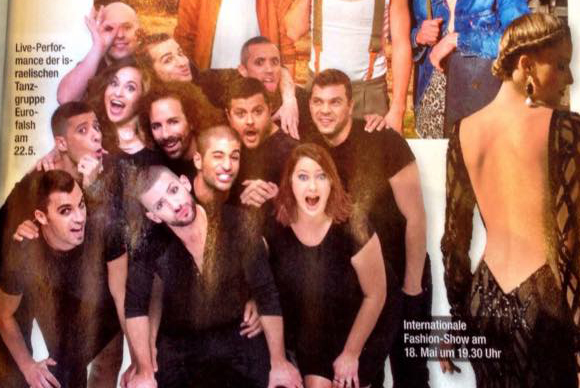 'Eurofalsh' in an Austrian magazine.

This year marks 60 years for the Eurovision Song Contest, which was started by the European Broadcasting Union after World War II, to try and encourage the broken and wounded continent. Since then it aspires to be a stage that promotes peace, and this year was no exception: During a press conference of the Israeli delegation earlier this week, a Lebanese journalist and Eurovision fan stood up to support the Israeli song, ‘Golden Boy’ by Nadav Guedj , asking him if he had a clue that his song could ‘bridge between two countries that supposedly has issues.” The Lebanese fan was later invited on stage by the Israeli delegation to take a photo with the Israeli and Lebanese flags.

“This is the true meaning of Eurovision,” says Eran Luna. “Stories like this prove that wars are for Prime Ministers and politicians. The real people just want to live their lives in peace and love who they want to love. Last year, the last song we performed at the Euroclub was ‘Halelujah.’ They turned on the lights and you should have seen this club full of foreign people screaming all the words in Hebrew. It was really moving, and it pushed us to continue doing what we’re doing, because what we’re doing comes from love and that’s the best weapon to fight war with.”
Advertisement
Subscribe for our daily newsletter