By YANIR DEKEL
DECEMBER 23, 2015 04:28
Advertisement
Under the title “Our Faces,” 44 members of the religious LGBT community revealed their identities and sexual orientation online last week. The campaign that was initiated by members of Bat Kol, an organization of religious lesbian women, and Havruta, the gay men's equivalent, has received major interest and media coverage in Israel and around the world.
“Last summer, after the murder of the late Shira Banki at the Jerusalem Gay Pride, the religious organizations published an ad in the religious newspaper ‘Saturday Night.'” Bat Kol member and co-organizer of the campaign, Zehorit Sorek, explains how it all began. “In the ad, about 100 members of the LGBT religious community signed first and last name and the religious institute in which they studied, and we called on the rabbis to act with tolerance.”
“The ad attracted great interest in the religious community,” Zehriit continues. “Dan Uziel, an active member of Havruta and part of Kehila Datit Ge’ah (Religious Proud Community) raised the idea of taking it a step further, thinking that when you get to know the person standing in front of you, when you hear his story, it brings you closer to him and drops partitions. When we, the gay community is “out there" [as an idea rather then a face] it’s easier for the religious community to say 'they' and ‘those people’, but when we tell our stories and expose our names and faces, that makes it more personal, we are no longer ‘beyond the wall,’ we are the neighbors’ daughter and the babysitter of children in the neighborhood, and we've learned in the same classes- and the fact that they know us can lead to less ignorance and less hatred.”
When Dan approached Zehorit with the idea she immediately saw how it could help decrease LGBTphobia. “ I knew it would be a fantastic project and joined in to help find more women and more people whose exposure would be difficult,” she says. “We contacted them personally, with phone calls, emails and distribution lists.”
The response from within the LGBT community in Israel was amazing and supportive. Not only did the media in Israel cover this extremely well-planned project, including great photography and ad-design of the participants, LGBT media around the world has picked up the story too. 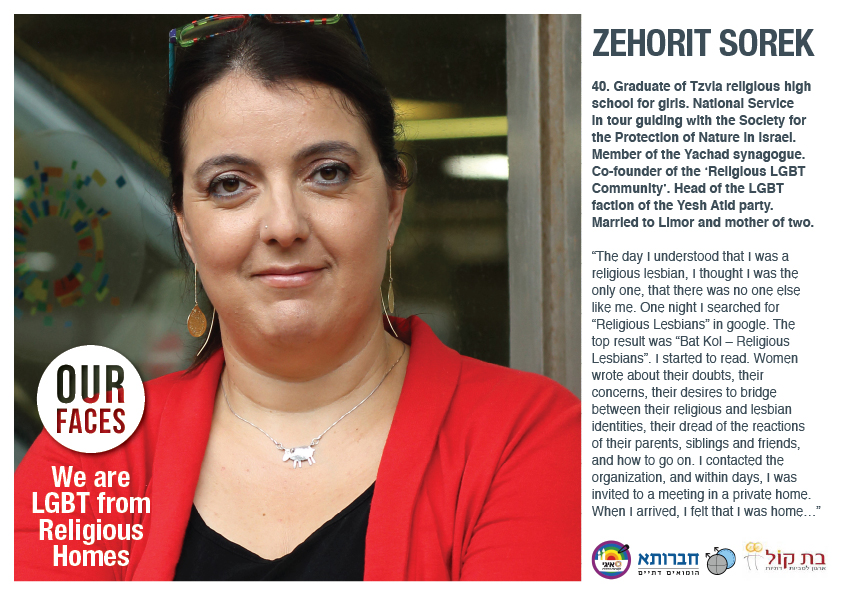 But not all of the responses were amazing. The comments section under the articles in Israel illuminated extremists’ opinions on LGBT people, including a great deal of homophobia. “I’m not interested in my kids being seen in a society in which there are two men who are known to have sex with each other; it’s like living in a neighborhood with a drug dealer,” was one of the comments. “LGBT people have their own society so they can go there, where they will be accepted just the way they are. Don’t come and tell us that you know what’s good for us- find them a place where they are welcomed.”
“This response has so many false assumptions and all of them are due to unfamiliarity, and perhaps ignorance, and eventually written in such a way that expresses hatred,” says Zehorit.
“I will not go into all the assumptions in this response, but the comparison between the gay community and drug dealers is problematic by itself: the idea that drugs hurt normal lives, hurt the society and its texture by addiction and self and general destruction. Drugs harm people.”
“The LGBT community asks to live equally; the value of equality is a value that we all aspire to, with the understanding that a healthy society is based on equality, inclusion and acceptance of people who are different from you. And like a good Jew I would like to answer this person with a question: I am a woman, religious and lesbian. What are my options in your eyes?”
“Should I stop being religious? Stop believing in the Creator? Stop believing that Judaism brings value to the world and keeping its commandments makes me happy?
Or should I stop living with a woman and and live in a lie and deception with a man? Lie to my children, to the people around me and mainly lie to myself? By no means! I am not willing to lose any part of my identity. I am not willing to lose my faith just as I will not live a lie and a fraud.”
“There’s a story in the Gemara that tells about a Rabbi who was riding on a donkey and met an ugly man. The ugly man said ‘Hello!’ to the rabbi but the latter did not respond to his greeting.
‘Why didn’t you answer my greeting?’ asked the ‘ugly’ man.
‘Because you're ugly,’ answered the rabbi.
So the man responded: Then you should go to the creator who manufactured me and tell him what an ugly tool you created.
If any person from the religious community has a problem with our orientation then I invite him to come back and read this story again.”
According to Zehorit, the LGBT religious organization will continue to work together in order to shed light on the ignorance in the religious community towards gay and lesbian people. “There are several LGBT religious organizations, all of which come to fulfill the needs of our community,” Zehorit says. “Havruta provides an answer for religious gays or those who came from religious homes or deal with the religious world. Bat Kol provides the same for lesbian women. We know and understand that togetherness is power. The relationship between the organizations is reflected when we seek to work towards visibility of the LGBT religious community, such as in this project, with our faces, in Gay Pride, in interviews and articles, and of course in the information campaigns we conduct among the religious society.”
Advertisement
Subscribe for our daily newsletter