By DOV SEGAL
Advertisement
"Excerpt from testimony given by Colonel L. Von Bischoffshausen:

Whilst patrolling the city I came across a crowd of people that had gathered alongside a gas station to watch what was happening in the adjacent yard. There were women in the crowd and many of them clambered onto chairs and crates so that they and their children could get a better view of the “spectacle” taking place in the yard below.

At first I thought this must be a victory celebration or some type of sporting event because of the cheering, clapping and laughter that kept breaking out.

However, when I asked what was happening I was told the “death dealer of Kovno” is at work and he would make sure that all “traitors and collaborators” received a fitting punishment for their “treachery.”

When I drew closer I witnessed a display of brutality that was unparalleled by anything I saw in combat during two world wars.

Standing on the tarmac in the yard was a fair haired young man of around 25. He leaned on a long iron bar as thick as human arm and around his feet lay between fifteen to twenty people who were either dying or already dead. A few feet away from him stood another group of individuals who were guarded by armed men.

Every few minutes he signaled with his hand and another person quietly stepped forward and had his skull shattered with one blow from the huge iron bar the killer held in his hand.

Each blow he struck drew another round of clapping and cheering from the enthralled crowd."

"Laimonas Noreika, a resident of Kaunus:

I can’t remember whether we left work early that day (my elder brother Albertas and I) or whether we went home at our usual time. Opposite the Kovno cemetery at the corner of Greenwald St and Vytautas Boulevard there was a small garage, which serviced light vehicles.

A large crowd had gathered alongside the perimeter fence of the garage yard. So we also went over to see what was happening.

I keep asking myself whether I just imagined it all but I know I did not.

Those horrific events have been burned onto my memory and will remain there until my dying day.

In the middle of the yard, in broad daylight and in full view of the assembled crowd, a group of well dressed, spruce intelligent looking people held iron bars which they used to viciously beat another group of similarly well dressed, spruce, intelligent people. It was obvious the yard also served as a horse stable as animal droppings were littered everywhere.

The assailants yelled the word “norma” (move it) repeatedly as they relentlessly battered the Jews until they fell to the ground and began gathering feces. They kept hitting them until finally they lay inert.

Then, using a hosepipe for washing cars, they doused them with water until they came round following which the abuse would start all over again. And so it went on and on until the hapless victims lay dead. Bodies began to pile up everywhere.

I stood next to the fence and watched it all until finally, my brother Albertas pulled me away…"

The above murders are known as the Lietūkis Garage Massacre. It was the most infamous incident of the Kaunas pogrom: the slaughter of Jewish people living in Slobodka (Vilijampolė), the Jewish suburb of Kaunas, Lithuania. It took place between June 25 and 29, 1941.

After the murders at the garage, they moved to Slobodka to continue the slaughter.

According to "Annihilation of Lithuanian Jewry" by Ephraim Oshry (1995), the rabbi of Slobodka, Rav Zalman Osovsky, was tied hand and foot to a chair and his head was laid upon an open volume of the Gemara (part of the Talmud). Then they sawed his head off.

After that they murdered his wife and son.

His head was placed in a window of his house, bearing a sign: "This is what we'll do to all the Jews." 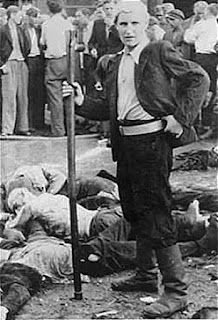