After joining, Ramic allegedly attended an Islamic State training camp where he received weapons and physical training and fired an AK-47, the DOJ said. 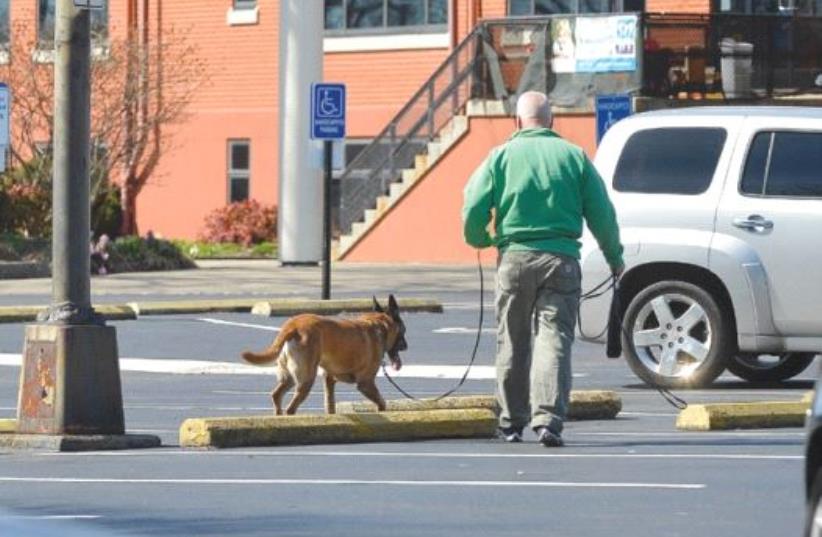 A policeman and a detection dog search for explosives after a bomb threat to the Jewish Community Center in Louisville, Kentucky
(photo credit: BRYAN WOOLSTON/REUTERS)
Advertisement

A Kentucky man who allegedly attended an Islamic State training camp in Syria was charged in a US federal court on Monday after being recently deported to the United States, the Justice Department said.

The federal court in Kentucky unsealed an indictment on Monday charging the dual US-Bosnian citizen with providing material support to the Islamic State of Iraq and al-Sham (ISIS). The defendant was also charged with receiving military-type training from ISIS, the DOJ said.

All three then purchased tickets to fly to the Turkish city of Gaziantep near the border with Syria. From there, they crossed the border to join the Islamic State, according to the Justice Department.

After joining, Ramic allegedly attended an Islamic State training camp where he received weapons and physical training and fired an AK-47, the DOJ said.

Coffins with remains of people from the Yazidi minoirty, who were killed by Islamic State militants, and they were exhumed from a mass grave, are seen during the funeral in Kojo, Iraq February 6, 2021.Picture taken February 6, 2021. (credit: REUTERS/CHARLOTTE BRUNEAU)

The FBI obtained photographs of Ramic in Islamic State territory which depict him wearing camouflage clothing and standing in front of a pickup truck outfitted with an anti-aircraft gun and the Islamic State flag, the Justice Department added.

After joining the militant group, Ramic and his co-conspirators remained in contact with each other and discussed, among other things, Ramic’s presence in Raqqa, Syria, and his use of an anti-aircraft weapon to shoot at planes, according to the DOJ.

Ramic had been incarcerated in Turkey and was deported to the United States, the Justice Department said. He arrived Thursday evening and made his initial appearance in court on Monday.

If convicted of the charged offenses, Ramic faces a maximum penalty of 50 years in prison, a fine of $750,000 and term of supervised release up to life, the Justice Department said. The FBI was investigating the case.