"Hezbollah’s dangerous military strengthening and the murderous statements of its leaders require a condemnation,” Danon wrote to Ban Ki-moon. 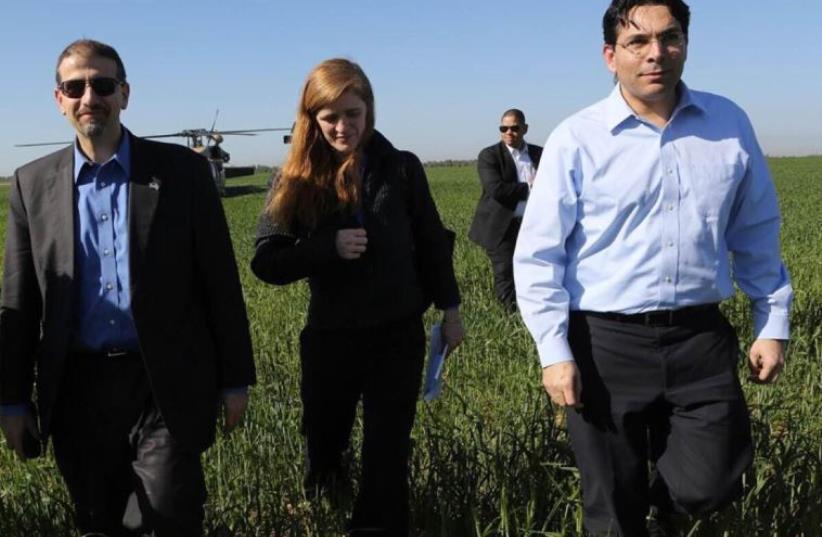 US Ambassador to Israel Daniel Shapiro, American Ambassador to the United Nations Samantha Power and Israel's Ambassador to the UN Danny Danon
(photo credit: AVI DODI)
Advertisement
"When a terror organization threatens the citizens of a member state, silence is not an option," Israel’s Ambassador to the United Nations Danny Danon wrote to UN Secretary-General Ban Ki-moon on Thursday, demanding that he denounce Hezbollah chief Hassan Nasrallah's threat earlier in the week to turn Haifa's ammonia plant into his own nuclear bomb. "Hezbollah’s dangerous military strengthening and the murderous statements of its leaders require a condemnation,” the ambassador wrote. In his letter, Danon also pointed out the involvement of Hezbollah in the Syrian civil war and the organization's military buildup in southern Lebanon. These two elements, he explained, are “a flagrant violation” of UN Security Council Resolution 1701, which called for a disarmament of all armed groups in Lebanon, including Hezbollah, after the second Lebanon war in 2006.It also states that no armed forces other than the United Nations Interim Force In Lebanon (UNIFIL) and the Lebanese army will be posted south of the Litani River. "Hezbollah has made southern Lebanon a military fortress in order to fire indiscriminately at Israeli population and in doing so, it is committing a double war crime," Danon told Ban Ki-Moon. "I call on you to condemn the dangerous and violent statements by Hezbollah and to demand that the Lebanese government fulfill its commitments under Resolution 1701,” he added.In a televised address, Nasrallah said: “Israelis fear that if we attack the ammonia plant in Haifa, we could kill 800,000 residents of the occupation entity and they estimate that it could damage the gas facilities as well, like a nuclear weapon.”Danny Danon had already called on the secretary-general to condemn rocket attacks on northern Israel, back in December, after three rockets were fired from southern Lebanon towards Israel.