The rabbi had previous complex medical conditions, placing him in serious risk when he tested positive for coronavirus a few days prior to his passing. 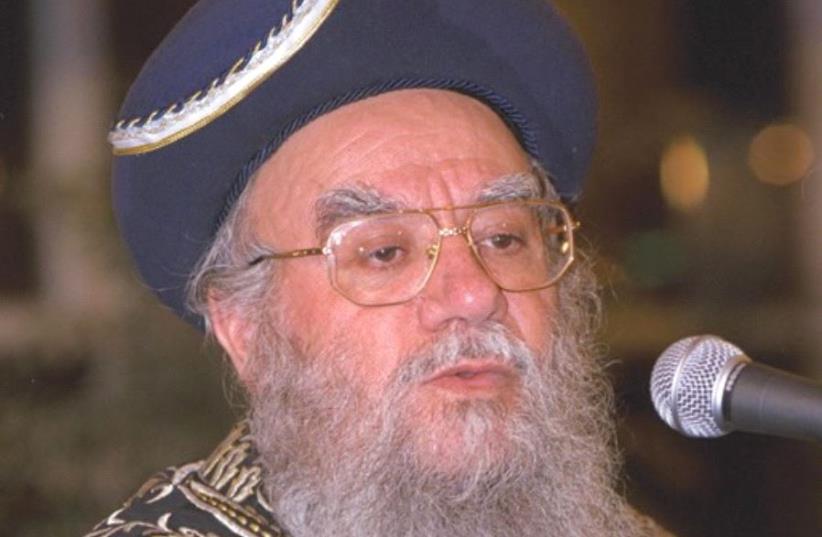 ELIYAHU BAKSHI-DORON
(photo credit: AMOS BEN-GERSHOM/GPO)
Advertisement
Former Chief Sephardic Rabbi Eliyahu Bakshi-Doron died of coronavirus on Sunday night, while being treated at Shaare Zedek Medical Center, Jerusalem.
"Rabbi Bakshi-Doron was an important link in the chain of Torah scholarship of the Sages of Spain," said Prime Minister Benjamin Netanyahu in light of the rabbi's passing. He "served as a guide to all Israeli communities, in Israel and in the world."
He was hospitalized five days prior after coming to the hospital for a routine test, complaining of coronavirus-like symptoms, and subsequently testing positive for the virus. The rabbi suffered from previous illnesses and his condition deteriorated gradually throughout the day.
His last hours involved numerous attempts to resuscitate him, but doctors were forced to pronounce him dead, according to the Shaare Zedek spokesperson.
The funeral procession was held on Monday morning at 10:30 a.m. in the Spanish Funeral Home in Givat Shaul. Rabbinic leaders were expected to participate along with the children of the rabbi.
The public was asked not to attend the funeral in light of the coronavirus pandemic. Instead, they may pay their respects by viewing the livestream of the funeral.
The rabbi, who was born in Jerusalem and began his career in Bat Yam, was known for promoting dialogue between faiths and rejecting violence.
He was inducted to be the Chief Sephardic Rabbi in 1993, the first non-Iraqi since Ben-Zion Meir Hai Uziel in 1954. Bakshi-Doron served in that capacity until 2003, later replaced by Rabbi Shlomo Amar. He was the leader of the institutions "Benin Av" in Ramat Shlomo and "Dabei Eliyahu" in the Beit Dagan area of Jerusalem.
Chief Rabbi Yitzhak Yosef said that "the rabbinic world, the Torah world and the Halacha [Jewish law] world lost one of its first pillars" in the wake of the rabbi's death.
Ashkenazi Chief Rabbi David Lau said that, "along with the entire House of Israel, I am mourning on this difficult evening the departure of the deceased Genzi of the Rishon LeZion, the chief rabbi of Israel and the Chief Justice of the Grand Court, Rabbi Eliyahu Bakshi-Doron.”
His death "leaves a great void in the Jewish world," he concluded.
Rabbi Ben Zion Bakshi-Doron, son of the deceased rabbi, said that his father will be remembered for his "great humility.”
"He was available for every Jew," he continued. "He had a devotion to the public. He did not belong to any particular sector; his big heart contained the entire State of Israel. He was a man of the people of Israel."
"It hurts us that we could not say goodbye properly," said the rabbi's son-in-law, Rabbi Alon Navon. "The funeral campaign has yet to be decided."
"The rabbi was a man of kindness and giving who worked to bring the hearts of the people of Israel closer together," said Defense Minister Naftali Bennett in light of the rabbi's passing. "In my name and in the name of the security systems, I would like to send condolences to the family at this difficult time."
BLUE AND WHITE leader Benny Gantz sent his condolences to the rabbi’s family, saying that "his legacy and wisdom will continue to live on through his students and through those following in his path."
"I had the privilege to be closely acquainted with him, enjoy his advice and be blessed by his holy mouth many times," said Jerusalem Mayor Moshe Leon. "The city of Jerusalem where he worked, studied and raised his family will commemorate his memory in the near future."
"The heart is saddened" by the rabbi's passing, Education Minister Rafi Peretz said on Sunday night. "Rabbi Bakshi was one of the greatest Torah leaders in the last generations, a teacher for rabbis, dedicated to the Torah and to the nation of Israel in an outstanding way."
Transportation Minister Bezalel Smotrich said that the rabbi had "connected to all parts of the nation and led in his duties with a firm standing on the dignity of the Torah."
Interior Minister Arye Deri wrote on his Twitter page that he is "bitterly mourning" the passing of Bakshi-Doron.
"Rabbi Bakshi-Doron was a great, wise disciple, a guide to many among the people of Israel, and his passing is a great blow," he continued. "A very great pain, a very great loss for the people of Israel."
Yamina MK and former justice minister Ayelet Shaked said that the rabbi was "a man of great giving to the people of Israel."
"I send my condolences to the Bakshi-Doron family, and am hurting with the entire nation of Israel over the death of the former chief rabbi Eliyahu Bakshi-Doron from the coronavirus," said Likud MK Nir Barkat.
In December 2012, Rabbi Bakshi-Doron was indicted in the "Rabbinate Case" for fraudulently accepting items under aggravated circumstances, attempting to obtain items fraudulently, breach of trust and giving a false certificate. The charges were due to the claim that as chief rabbi, he permitted giving rabbinical certifications to hundreds of members of the security systems without their having deserved them. Those certificates gave the holders financial benefits.
In May 2017, he was convicted in the Jerusalem District Court. He was sentenced to 12 months probation and a NIS 250,000 fine.