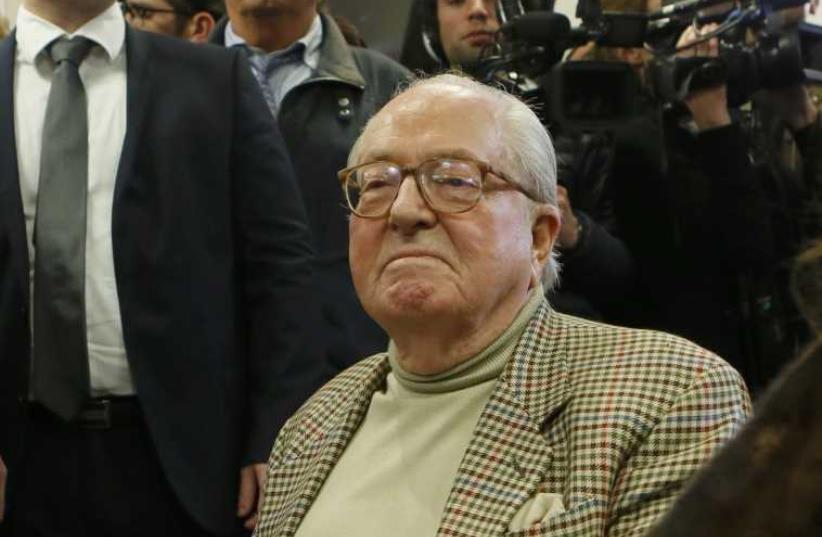 The founder of France's far-right National Front party, Jean-Marie Le Pen
(photo credit: REUTERS)
Advertisement
PARIS - France's far-right National Front party has suspended the membership of its founder Jean-Marie Le Pen and will call a party meeting to strip him of his title of honorary chairman, the party said in a statement.The National Front's executive committee, chaired by Le Pen's daughter, Marine, held a disciplinary hearing on Monday after the former paratrooper repeated his view that Nazi gas chambers were a mere "detail" of World War Two.Marine Le Pen, who succeeded her father as party chief in 2011, said on Sunday she no longer wanted the 86-year-old to speak on behalf of the National Front.Since taking the helm, Marine has sought to rid the party of its anti-Semitic image and position it as an anti-immigrant, Eurosceptic force offering protectionist policies to shelter France from globalization.Opinion polls this year have suggested she will head the field in the first round of presidential elections due in 2017. However, pollsters say she will not be able to muster enough support to triumph in the subsequent second-round ballot.In recent weeks, her father has openly defied his daughter with controversial comments, including a defense of Philippe Petain, the leader of the French war-time government that cooperated with Nazi Germany.Le Pen senior last month agreed to give up on seeking to stand for the party in regional elections, but has insisted he will not quit politics altogether and will continue as a member of the European Parliament.On Friday, he unexpectedly took to the stage to cheers during his daughter's May Day speech to hundreds of National Front supporters in central Paris.Le Pen's party membership will be suspended ahead of the party meeting, which will be held in three months, the National Front statement said