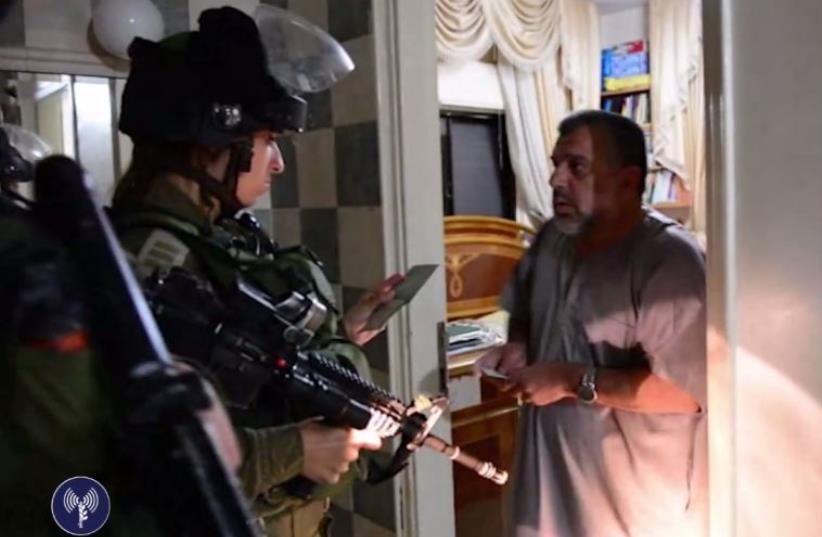 IDF soldiers arrest senior Hamas official Hassan Yousef
(photo credit: screenshot)
Advertisement
A Palestinian youth was killed Tuesday morning during violent clashes with IDF troops in the West Bank town of Kalandiya, the Palestinian Health Ministry said.According to the IDF, “a violent disturbance broke out, during which stones and explosive devices were thrown towards security forces who responded with live fire,” and that “a report was received about a Palestinian casualty. The incident will be investigated.”The Palestinian Maan News Agency said that IDF troops fired live bullets as well as rubber-coated steel bullets, tear gas bombs and sound grenades.According to the report, 23-year-old Mohammed Edwan was shot “at close range” by troops while he was driving his car on al-Matar Street in Kalandiya. Another three sustained moderate wounds.The IDF said that a total of 12 Palestinian suspects were arrested in raids throughout the West Bank overnight Monday suspected of involvement in terrorist activities, popular terrorism and violent disturbances against civilians and soldiers.The homemade Carlo-style gun discovered by IDF forces on April 2. (IDF)The Shin Bet (Israel security agency) confirmed to The Jerusalem Post that one of the suspects arrested was senior Hamas figure Sheikh Hassan Yousef, who was arrested in the Ramallah suburb of Beitunia.“His detentions are routine and take place from time to time in the context of Hamas activity,” the Shin Bet told the Post.During the raid, the IDF and Israel Police discovered illegal weapons in the village of Beit Ummar, including a “Carl Gustav” gun – a homemade weapon often found in terrorist hands in the West Bank. In June 2016, four Israelis were killed when two Palestinian terrorists opened fire inside a Tel Aviv restaurant. They used a Carl Gustav gun.Yousef has spent close to a third of his life in Israeli prisons and was last arrested in December 2017 for “advancing and promoting Hamas activities” in the West Bank. He was released from prison last October after spending 10 months in administrative detention.One of his sons, Musab Yousef, helped the Shin Bet thwart several Hamas-orchestrated terrorist attacks against Israelis from 1997 to 2007. Yousef renounced his relationship with his son in 2010.Musab has since moved the United States, converted to Christianity and wrote a book about his experience serving as an agent for the Shin Bet, titled Son of Hamas. He will be speaking at The Jerusalem Post Conference in New York on June 16.