Housing Ministry approves marketing of over 2,000 units in W. Bank

Galant strongly condemned the handful of rioters and their violence towards security forces during the Amona operation. 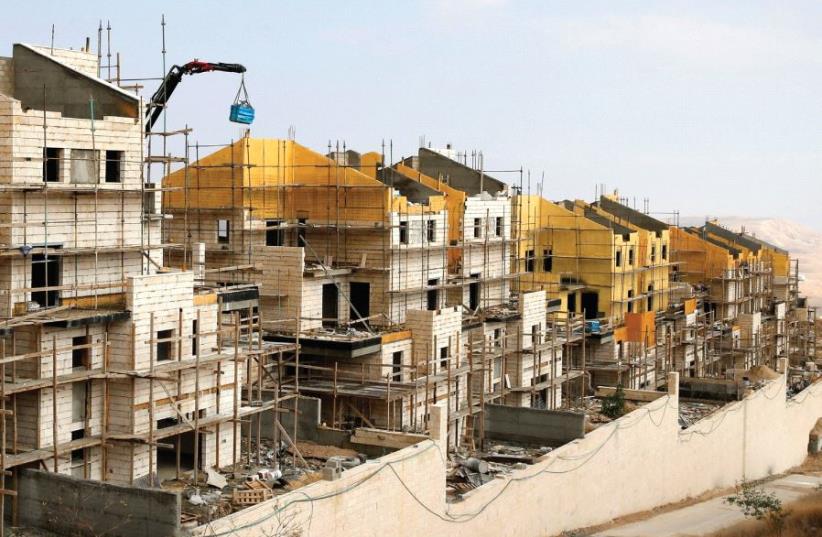 BULIDINGS ARE SEEN under construction in the settlement of Ma'aleh Adumim [File]
(photo credit: REUTERS)
Advertisement
Israel on Thursday moved swiftly to sell 2,086 of the settler homes whose authorization Prime Minister Benjamin Netanyahu had announced just one day earlier, as security forces demolished the West Bank outpost of Amona.“There is no day more symbolic for a boom in construction in Judea and Samaria that the day when Amona is evacuated,” said Construction Minister Yoav Galant (Kulanu). He noted that the state is simply making compensation for the High Court of Justice’s order to demolish the community of 40 families.“We are a nation of law and order,” Galant said. But, he added, “As I have said in the past, a larger Amona will be built. This start comes in the marketing of hundreds of housing units.”The homes on Galant’s list are all in the settlement blocs and include: 698 units in Alfei Menashe, 630 in Beit Aryeh, 660 in Beitar Illit and 98 in Karnei Shomron.Last week Israel spoke of advancing or authorizing 5,500 units, including those on Galant’s list.Israel feels free to take such measures, because it believes that US President Donald Trump will be supportive of settlement construction in the blocs and Jewish building in east Jerusalem.It’s part of a series of gestures Netanyahu has made to the Israeli Right and to the settlement movement in general to offset the anger over the outpost’s destruction. On Wednesday he also announced the creation of a new settlement.On Thursday afternoon, as police moved to evacuate the outpost’s last stronghold, its synagogue, Netanyahu visited the Ariel settlement to participate in a memorial ceremony for the city’s former mayor, Ron Nachman, who died of cancer in 2013.“Although it’s been four years since Ron was taken from us, the city of Ariel, which was the focus of his life, is well-built, developed and prosperous.Today it has 20,000 residents and I promise you, there will be many more,” Netanyahu said.He noted that in the last week he had announced the advancement and eventual authorization of some 900 homes in Ariel. The building permits, he said, are a sign of the government’s commitment to the city. He recalled how early in his premiership he had planted a tree there for Tu Bishvat.“The city of Ariel will always be part of Israel,” Netanyahu declared.He added that he and Nachman were “partners” who walked the same path. “The settlement enterprise is as important to me as it was to him.”