Less than 24 hours after saying that New Right was running alone as a liberal, right-wing party, Bennett hails unity of entire spectrum of religious-Zionist world; Otzma and Bayit Yehudi are defiant. 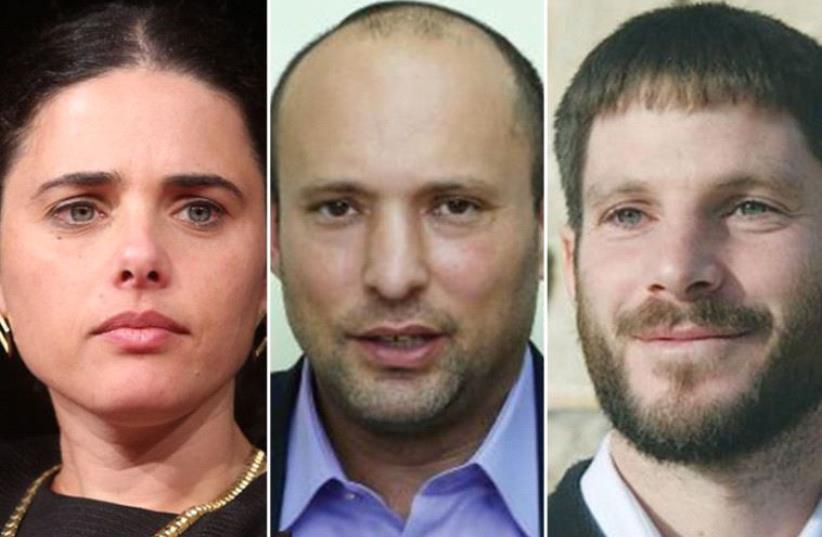 Shaked, Bennett and Smotrich
(photo credit: COURTESY/REGAVIM,MARC ISRAEL SELLEM)
Advertisement
Prime Minister Benjamin Netanyahu is again bringing heavy pressure to bear on the right-wing parties, in general, and New Right leader Naftali Bennett, in particular, to allow the far-right Otzma Yehudit party to join a united right-wing, religious electoral list for the upcoming elections.Netanyahu made similar efforts to pressure the right-wing parties to bring in the extremist Otzma Yehudit party, a successor to the banned Kach Kahanist party, in the April and the September elections to maximize the electoral potential of right-wing voters.Netanyahu has even threatened to fire Bennett as defense minister if he refuses to allow Otzma to join the united right-wing, religious list, Channel 12 reported Tuesday night.Sources in New Right confirmed that the prime minister is indeed strongly pressuring Bennett to join with the Otzma and the conservative religious-Zionist Bayit Yehudi party. But Bennett and other figures within New Right are extremely reluctant to join with Otzma because of its extremist image and policies.In response to the reports, the Likud blamed Bennett for the failure of the Right to form a government in the last two elections.“Unfortunately, Bennett wasted votes in the April elections, and in the last elections pushed Otzma out of his party, and we were therefore unable to form a right-wing government,” a party spokesman said in a statement to the press. “The Right has to do everything to avoid wasting votes,” he added.New Right said in response that its leaders were working tirelessly to formulate one united right-wing list and said they were calling on Bayit Yehudi leader Rabbi Rafi Peretz to join them without mentioning Otzma.These events transpired after New Right performed a massive U-turn on Tuesday morning by announcing it was joining up with the hard-right National Union party for the upcoming election, despite having said, less than 24 hours earlier, that New Right was running alone.“This is a great day. We have brought about a great unification of the ideological Right and religious Zionism,” Bennett said, despite having said on Tuesday that New Right was running as “the party of the liberal, ideological Right.”The 180-degree about-face came as a result of internal polling by right-wing parties that suggested a unity deal between Bayit Yehudi, National Union and the far-right Otzma Yehudit party, which then looked to be a likely outcome, would not have passed the electoral threshold, “wasting” tens of thousands of right-wing votes.It did, however, leave Bayit Yehudi and Otzma out in the political wilderness, and the two parties are insisting they must both be allowed to join New Right and National Union if there is to be a large, unified right-wing electoral list.Bennett has long been reluctant to join with the religious, right-wing parties due to a desire to position himself as the leader of the ideologically liberal Right.Smotrich, however, is well-known for his hard-line views on religion and state and has said unapologetically on several occasions that he would like to see Israeli law based on Jewish law to a greater extent. He has also proposed a far-right plan for annexing the entire West Bank without granting Palestinians Israeli citizenship.And Bayit Yehudi leader Rabbi Rafi Peretz is also from the hard-line wing of the religious-Zionist community and has got into hot water for stating that he believes gay conversion therapy works and has conducted such therapy sessions.In December, Peretz was desperate to reassert his leadership of the right-wing religious-Zionist parties, despite his lack of popularity and party support. He signed a unity agreement with the Otzma last month, leaving Smotrich and his National Union party out in the cold.Bayit Yehudi and National Union conducted serious unity negotiations on Monday and agreed that they would fully merge their parties and subsequently hold leadership primaries.A vote on the merger agreement was supposed to have been brought to Bayit Yehudi’s central committee on Tuesday night for a vote. But it was removed from the agenda, giving rise to severe concerns in the National Union that the merger would eviscerate it of all power.There was no further opportunity for the central committee to approve the merger agreement before the deadline for submitting electoral lists to the Central Elections Committee on Wednesday night.It appears that this issue was what caused Smotrich to turn again to New Right for a unity deal.In a statement to the press following the announcement of the New Right-National Union agreement, Bayit Yehudi accused Smotrich of “smashing religious Zionism” and said the move would “harm the entire right-wing camp.”Bayit Yehudi said it would “continue onwards” and would make an announcement shortly about “continued processes.”Otzma Yehudit accused New Right of having abandoned religious Zionism and said Smotrich was joining him in a statement to the press.“Otzma Yehudit and Bayit Yehudi will work to bring in other people to its religious-Zionist list and together will bring about victory for the right in the elections,” the party said.