North Korea has refused to engage with repeated behind-the-scenes US diplomatic overtures since mid-February, calling it a "cheap trick." 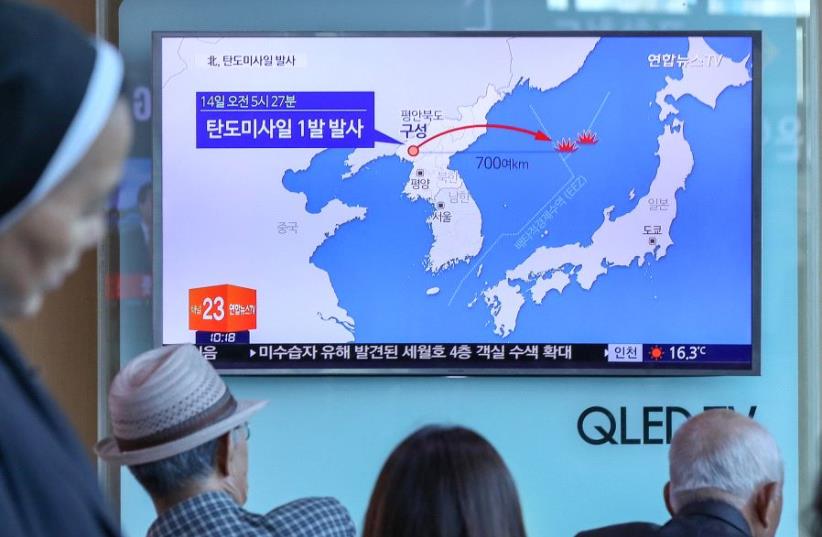 People watch a news report on North Korea firing a ballistic missile, at a railway station in Seoul, South Korea, May 14, 2017
(photo credit: REUTERS)
Advertisement
North Korea fired two short-range missiles at the weekend, US and South Korean officials said, but Washington played down the first such tests under President Joe Biden and said it was still open to dialog with Pyongyang.
The North Korean activity involved weapons systems at the low end of the spectrum that were not covered by UN Security Council testing bans, two senior officials of the Biden administration told a briefing call on Tuesday.
South Korea's Joint Chiefs of Staff (JCS) said two cruise missiles were fired off North Korea's western coastal town of Onchon on Sunday morning.
Seoul had detected signs a test was imminent and was monitoring it in real time, a JCS official told reporters on Wednesday. The JCS reports North Korea's testing of advanced weapons such as nuclear bombs and ballistic missiles nearly in real time but not some tests of lower grade, shorter range weapons.
The launch marks North Korea's first publicly known weapons test since Biden took office in January.
But Biden downplayed the latest activity, saying "nothing much has changed," while one senior official said it was "normal" testing and warned against "hyping" it.
"No, according to the Defense Department it's business as usual. There's no new wrinkle in what they did," Biden told reporters upon his return from a visit to Ohio, when asked if the test was a provocation.
The Pentagon declined comment on the test, which was first reported by the Washington Post. North Korea's mission to the United Nations did not immediately respond to a request for comment.
The test came just days after US Secretary of State Antony Blinken vowed to work to denuclearize North Korea and criticized its "systemic and widespread" human rights abuses while in Seoul with the US Defense Secretary.
North Korea has refused to engage with repeated behind-the-scenes US diplomatic overtures since mid-February, calling it a "cheap trick."
The senior US officials said the administration's North Korea policy review was in its "final stages" and would host the national security advisers of allies Japan and South Korea next week to discuss that.
The officials said there had been "very little dialog or interaction" with North Korea since a failed summit between former President Donald Trump and North Korean leader Kim Jong Un in Hanoi in February 2019, but they do not see the latest missile test as "closing the door" for talks.
Ha Tae-keung, a South Korean lawmaker, said Seoul and Washington had agreed not to announce their detection of the missile test, citing a briefing by intelligence officials.
Opposition lawmakers and some experts said the US confirmation indicated a coordination failure between the allies, and suggested Seoul might be trying to cover up a provocation as it seeks to improve cross-border ties.
"It could've indeed been a routine, pre-planned activity," said Kim Dong-yup, a professor at Kyungnam University in Seoul. "But I can't help asking if the government and the JCS were walking on eggshells so as not to upset North Korea."
The JCS official said it does not disclose some North Korean activities to protect its reconnaissance assets based on consultations with the US military.
Jenny Town, director of 38 North, a US-based website that tracks North Korea, said the latest action appeared "pretty mild."
"My guess is that it has more to do with the joint exercises than anything else," she said.
North Korea has slammed joint US-South Korean military exercises this month even though they were scaled back in an effort to restart nuclear talks.
North Korea has continued to develop its nuclear and missile programs throughout 2020 in violation of UN sanctions dating back to 2006, helping fund them with some $300 million stolen through cyber hacks, according to independent UN sanctions monitors.
North Korea has not tested a nuclear weapon or an ICBM since 2017, but conducted repeated tests of shorter-ranges missiles after the Hanoi summit broke down. The Trump administration also sought to play down such tests.