The Shejaia club from the Gaza Strip must pass through an Israeli border crossing to reach the West Bank city of Hebron, where Sunday's game was scheduled to be played. 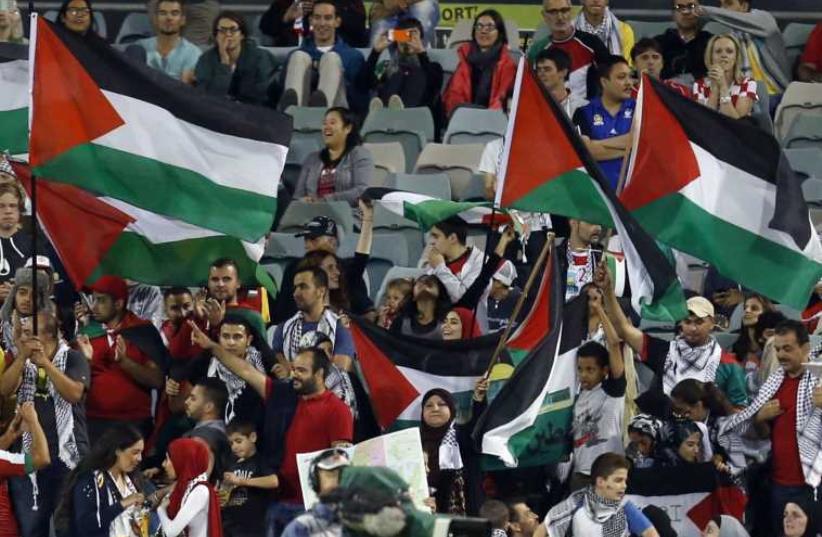 Fans of the Palestinian national team wave flags during their Asian Cup Group D soccer match against Iraq
(photo credit: REUTERS)
Advertisement
GAZA - The Palestinian Football Federation postponed the final Palestine Cup game between the champion teams of the Gaza Strip and the West Bank after Israel denied entry permits to some of the Gaza players, sports officials said.The Shejaia club from the Gaza Strip must pass through an Israeli border crossing to reach the West Bank city of Hebron, where Sunday's game was scheduled to be played, and to do so needs approval from Israel."It became clear seven people, including four players were not on the list and therefore, the entire mission can't leave Gaza without them," said Ala Shammaly of the Shejaia media office.Israel said the four players needed to undergo special questioning, which was to have taken place on Thursday, but the Palestinians did not show.It offered to let the rest of the team cross on Friday, the start of the weekend in Israel, with the four to meet them on Sunday when it would again be possible to conduct the questioning.The Palestinian federation said the game was delayed until further notice.Sunday's championship was to be a follow-up of a match on Thursday between Al-Ahly, the top team in the West Bank and Gaza's champion Shejaia.The game, which ended in a goal-less draw, had been the first such visit since a Palestinian uprising broke out in 2000.Whichever team wins the title will play in the next Asian Football Confederation (AFC) Cup."As always the Israeli occupation wanted to spoil our happiness. Effort by the Palestinian FA is continuing to allow the joy that began in Gaza from reaching out to Hebron," said Abdel-Salam Haniyeh of the Palestinian Higher Council of Sport.Israel's Coordinator of Government Activities in the Territories, whose office comes under the defense ministry, said the team's decision not to cross was "another cheap provocation" by the chairman of the Palestinian FA, Jibril Al-Rajoub."The Palestinians make cynical use of sport and in the end the ones hurt are the Palestinian public," it said.FIFA INTERVENTIONRajoub said on Thursday he had received a letter from FIFA's President Joseph Blatter saying he would work to remove obstacles that may hinder the holding of the final game.At the annual FIFA Congress in May, Palestine threatened to call for a vote for Israel's suspension from world football but it dropped its motion at the last minute and FIFA agreed to send observers to monitor the situation.Israel made a commitment to allow freer movement of Palestinian sport personnel and Palestinian sport officials say such a commitment was now being tested."It is time Israel lifts its hand off Palestinian sport," said Haniyeh.The PFA has complained that Israel restricts the movement of players and officials to and from the Palestinian territories. Israel cites security concerns for the restrictions, although it says it has eased travel recently.