The New Orleans-based 5th U.S. Circuit Court of Appeals ruled on a 2-1 vote that the law's individual mandate that directed Americans to obtain health insurance was unlawful. 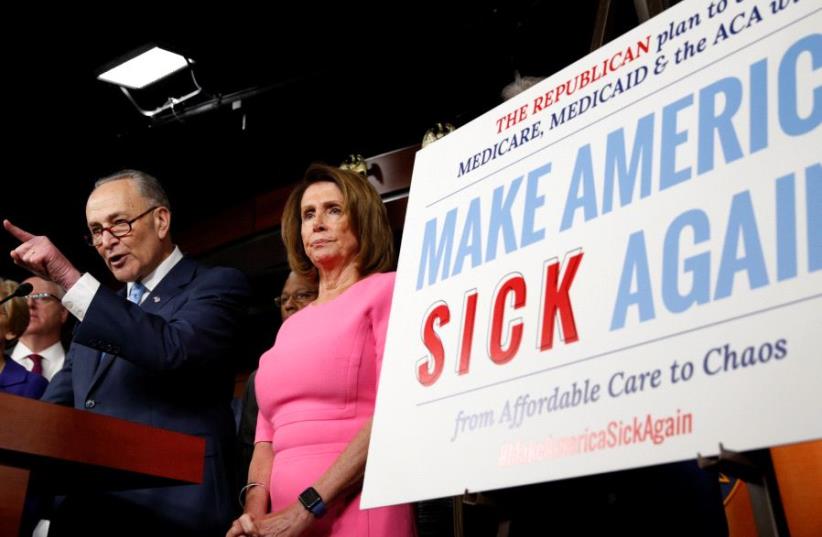 DATE IMPORTED: January 04, 2017 Senate Democratic Leader Chuck Schumer and House Democratic Leader Nancy Pelosi speak following a meeting with U.S.President Barack Obama on congressional Republicans' effort to repeal the Affordable Care Act.
(photo credit: REUTERS)
Advertisement
A U.S. appeals court ruled on Wednesday that a component of the Obamacare law is unconstitutional, but dodged a major ruling by stopping short of declaring that the rest of the landmark 2010 healthcare statute must also be struck down.

The New Orleans-based 5th U.S. Circuit Court of Appeals ruled on a 2-1 vote that the law's individual mandate that directed Americans to obtain health insurance - a provision already gutted by Republican-backed legislation passed in Congress - was unlawful.

The court, however, avoided answering the key question of whether the rest of the law can remain in place or must be struck down, instead sending the case back to a district court judge for further analysis. That means the fate of the signature domestic achievement of Democratic former President Barack Obama remains in limbo.

Writing for the majority, Judge Jennifer Walker Elrod said that Texas-based U.S. District Court Judge Reed O'Connor must "employ a finer-toothed comb" to determine if the entire law must be struck down.

In 2018, O'Connor ruled the entire law was unconstitutional.

Elrod wrote that it may be that the law does eventually have to be struck down in full, but "it is no small thing for unelected, life-tenured judges to declare duly enacted legislation passed by the elected representatives of the American people unconstitutional."

The dissenting judge, Carolyn Dineen King, said she would have found that the challengers had no legal standing to bring the lawsuit. She also said the rest of the law could be upheld even if the individual mandate was unconstitutional.

The law has drawn Republican ire since its passage. Congressional Republicans tried and failed numerous times to repeal it, and the Trump administration has taken several actions to undermine it.

"The 5th Circuit correctly held that the individual mandate is unconstitutional, and we look forward to the opportunity to further demonstrate that Congress made the individual mandate the centerpiece of Obamacare and the rest of the law cannot stand without it," said Texas Attorney General Ken Paxton, a Republican who leads the legal challenge brought by 18 conservative-led states.

California Attorney General Xavier Becerra, who heads a coalition of 20 Democratic-led states defending the law, said the ruling means President Donald Trump "got the gift he wanted -- uncertainty in the healthcare system and a pathway to repeal."

California will appeal the decision to the Supreme Court, a spokeswoman for the state attorney general said.

Obamacare has helped roughly 20 million Americans obtain medical insurance either through government programs or through policies from private insurers made available in Obamacare marketplaces. Republican opponents have called the law an unwarranted intervention by government in health insurance markets.

In 2012, the Supreme Court narrowly upheld most Obamacare provisions including the individual mandate, which required people to obtain insurance or pay a financial penalty. The court defined this penalty as a tax and thus found the law permissible under the Constitution's provision empowering Congress to levy taxes.

In 2017, Trump signed into law a tax bill passed by a Republican-led Congress that eliminated the financial penalty under the individual mandate.

The 2017 law means the individual mandate can no longer be interpreted as a tax provision and is therefore unlawful, the appeals court concluded in Wednesday's ruling.

Trump's administration supported the legal challenge and declined to defend the law in court.