In a September notice to the Tel Aviv Stock Exchange, Ahava said that its prospective buyer, which was unnamed at the time, would control more than 51% of the company once the deal went through. 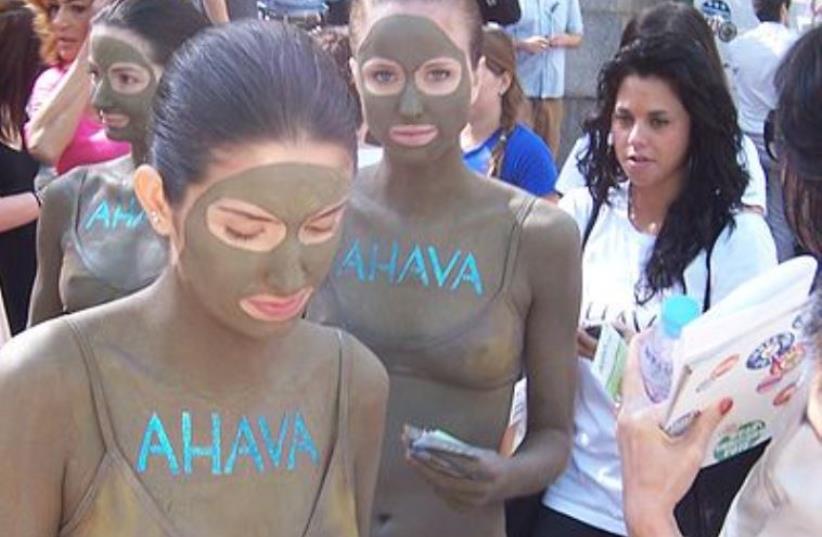 Models promoting Ahava's skin care products, by both wearing them and handing out samples of them, at the Spring 2009 New York Fashion Week
(photo credit: WASTED TIME R/WIKIPEDIA)
Advertisement
Chinese conglomerate Fosun International on Sunday inked a deal to acquire the roughly 16 percent of Israel’s Ahava Dead Sea Laboratories owned by Gaon Holdings for NIS 290 million.Fosun vice chairman and CEO Liang Xinjun and Gaon CEO Guy Regev attended the signing ceremony at the David Citadel Hotel in Jerusalem.“We feel very confident about the market in Israel, and continue to seek suitable investment opportunities in different areas in the country,” Xinjun said, adding that Fosun would seek to expand the Ahava brand’s success to China.In a September notice to the Tel Aviv Stock Exchange, Ahava said its prospective buyer, which was unnamed at the time, would control more than 51% of the company once the deal went through.“This deal will allow Ahava to increase its international activities and to penetrate new markets, and thus deepen its activities in Israel, as well,” Economy Ministry director-general Amit Lang said, praising the sale.Last month, Israel and China announced the opening of free-trade negotiations.The deal could be seen as either a blow or a success for the BDS movement, which promotes boycotts against Israel. Ahava’s plant in the West Bank has made it a frequent target of BDS activism. In June, The Jerusalem Post reported that Ahava was considering relocating the facility, and finalized its plans to do so last month, ahead of the acquisition.In 2013, Fosun acquired Israeli medical-device company Alma Lasers for $240m. In February, Fosun, one of China’s most aggressive global dealmakers, dropped a plan to buy a controlling stake in insurer Phoenix Holdings because conditions for the NIS 1.8 billion deal were not met.It was a setback for the Chinese conglomerate after its chairman, Guo Guangchang, briefly went missing late last year, before the company issued a statement saying he had traveled to the United States. Yet, the Ahava deal would be the latest sign the company, which has interests in sectors ranging from pharmaceuticals to mining, remains hungry for acquisitions.A source familiar with the matter said last month that Fosun was set to close a deal worth about £300m. ($426m.) to buy the Thomas More Square complex in London, in its biggest real-estate transaction in Europe.Other shareholders in Ahava include Shamrock Israel Growth Fund (part of the Disney family’s Shamrock Holdings of California) and the Livnat family, according to Ahava.Globes reported that Fosun would acquire the holdings of all of Ahava’s shareholders.