For many decades, the Scheufele family has been managing Chopard with professionalism, reliability, integrity and warmth. 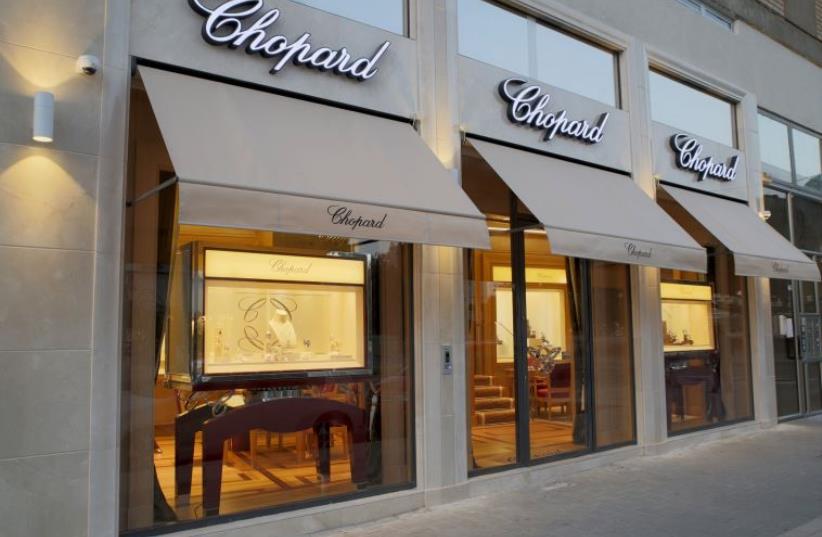 Chopard in Kikar Hamedina
(photo credit: Courtesy)
Advertisement
Chopard, the exclusive Swiss watches and jewellery store, has just opened a new boutique shop in Tel Aviv’s Kikar Hamedina shopping mall this month.More than 20 years ago, brothers Ofer and Alon Yunsuf decided to close down their 125-year-old family jewelry business and embark on a new journey representing leading luxury jewellery and watch brands, including de Grisogono, Audemars Piguet, Richard Mille, Chopard, Roger Dubuis, Graham, and Caran d'Ache.Now, two decades later, JB Jewellers has become synonymous with passion, creativity and design in the brands it's chosen to carry, as well as in the design and creation of its own unique pieces of jewellery. In both their Jerusalem and Tel Aviv exclusive boutiques, the Yunsuf brothers offer their customers courteous and uncompromising service. "When you're dealing in luxury watches and jewellery, the smallest details make a huge difference." Chopard Boutique is the first boutique of its kind in Israel for fine jewelry and watches. After representing Chopard in Israel for years, JB Jewellers and Chopard have finally decided to bring their relationship up a level and join forces to open the first Chopard Boutique in Israel. The 50-square-meter store at Kikar Hamedina, which is managed by JB Jewellers employees, was designed according to the highest international standards, just like the brand's other stores around the world. The new Chopard Tel Aviv Boutique offers its customers a unique line, called the High Jewelry Collection, which is available exclusively at Chopard Boutiques. The new store also offera a broad array of watches and accessories.Louis-Ulysse Chopard, the founder of Chopard, established his first workshop in 1860 in a small village in Switzerland called Sonvilier. Following his death in 1915, the jewelry company continued to thrive under the leadership of his son, Paul Louis Chopard, and his grandson, Paul André Chopard.In 1690, Chopard the grandson sold the business to Karl Scheufele III, who himself was the scion to a family of watchmakers. Under the management of the Scheufele family, Chopard evolved into one of the world's leading watchmakers and jewellers. In 1990, Scheufele's two children, Caroline Scheufele and Karl-Friedrich Scheufele took the helm and have brought the company to even greater success.Caroline, an avid art enthusiast, is the artistic director of high jewellery, and her spectacular designs have brought the company even greater success, and since 1998, Chopard has been the main sponsor of the Cannes Film Festival. In addition, in 2006, Chopard launched a new line of jewellery called the Red Carpet Collection that was designed especially for the Cannes Festival.Karl-Friedrich has undertaken responsibility for everything related to Chopard men's watches. In essence, he took his two favorite passions – watches and cars – and combined them to create the ultimate sports watch collection. The line was inspired by Karl-Friedrich's passion for classic and vintage cars, as well as sports car races such as the Mille Miglia and the Grand Prix de Monaco. Chopard has been taking part in the Mille Miglia since 1988. Karl-Friedrich's wife, Christine Scheufele, is also a senior manager in the company.For many decades, the Scheufele family has been managing Chopard with professionalism, reliability, integrity and warmth.