Sino-Israeli relations: Just do it!

China’s Ambassador Zhan Yongxin says the door is open for Israel to expand exports, but has some words of advice. 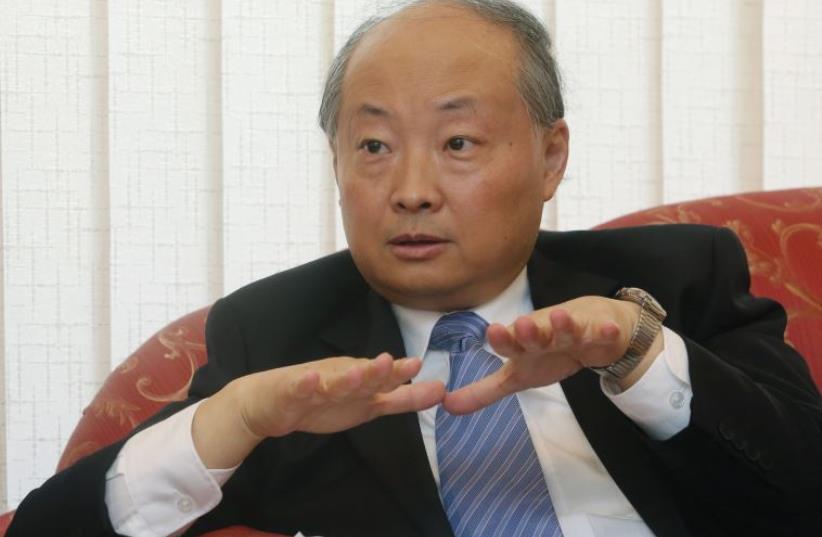 After Prime Minister Benjamin Netanyahu’s visit to China in 2013, there were many initiatives discussed and working groups set up. What has happened to those initiatives? Did Netanyahu’s visit bring about any significant change? High level visits have always been boosters for bilateral relations. After Prime Minister Netanyahu’s visit to China in 2013, two Chinese vice premiers, Madam Liu Yandong and Mr. Wang Yang, visited Israel.As results of those visits, the China-Israel Intergovernmental Mechanism of Economic and Technological Cooperation and the China-Israel Joint Committee on Innovation Cooperation have been established, various working groups (high technology industry, agriculture technology, environment conservation, energy and finance) set up, a three-year action plan on innovation cooperation signed. Those mechanisms and working groups are just part of the fruits of the visits, and laid out the blueprint of future cooperation between the two sides. They will for sure further promote our relations.

The first and last Chinese president to visit Israel was Jiang Zemin in 2000. When can we expect the next visit? As I just mentioned, frequent political exchanges and dynamic mutual visits take place at all levels. Last year, there were more than 40 vice minister and higher level Chinese delegations that visited Israel. I think this is a powerful demonstration that China attaches great importance to Israel and wishes to become your good friend and partner.There is a Chinese saying that says “When water flows, a channel is formed.” Let us jointly look forward to it.It is clear why Israel wants good ties with China. Why does China want to have closer ties with Israel? China would like to establish and develop relations of friendship and cooperation with all the countries on the basis of the Five Principles of Peaceful Coexistence, namely mutual respect for territorial integrity and sovereignty, mutual nonaggression, noninterference in each other’s internal affairs, equality and mutual benefit, and peaceful coexistence.Given the profound friendship between our two peoples, the highly complementary nature of our two economies, and the important roles we both play in the international community, there’s no reason for us not to get closer to each other. Our relationship will not only create more benefit to our two peoples, but also contribute to peace and development in the region and the world.Have the business ties between Israel and China cost Beijing anything in its ties with the Arab and Muslim world? We always take a fair, balanced and responsible attitude in handling China-Israel and China-Palestine, China-Arab relations. Benefiting from the good relations with both Israel and Palestine, China has been communicating with the two sides and playing a role of a mediator. For instance, the leaders of Israel and Palestine visited China in the same month. That’s not something you can always see. So, I think, the development of China-Israel relations is conducive for China to work on the two sides in a balanced way and push the peace process forward.If the ties between the two countries are good and getting stronger, then why does China always vote against Israel in every international forum? Can we expect to see any change in China’s voting patterns? In international affairs, China determines its position and policy by proceeding from the fundamental interests of the people of China and other countries and judging each case on its own merits, upholding fairness and justice.Actually, both sides have good communication on multilateral issues. For example, when Israel applied to join the Committee on the Peaceful Uses of Outer Space last October, China voted for Israel. Last December, when Israel proposed a Resolution on Agricultural Technology for Sustainable Development in the UN General Assembly, China also voted for Israel. And China supported Israel’s membership in the newly founded Asian Infrastructure Investment Bank. It wasn’t easy as some members of the bank do not have diplomatic relations with Israel. China also appreciates the support rendered by the Israeli side on many occasions.We have some difference of opinion, but we have good lines of communications.Netanyahu said recently that we appreciate Europe but admire Asia. Do you feel that Israel is pivoting toward Asia? Should it? Asia is the largest and most populous continent on our planet. It also accounts for one-third of the world economy. Asia is now one of the most dynamic regions with the most potential, and its global strategic importance has been rising. So it’s definitely a place worth Israel’s attention.
Advertisement
Subscribe for our daily newsletter