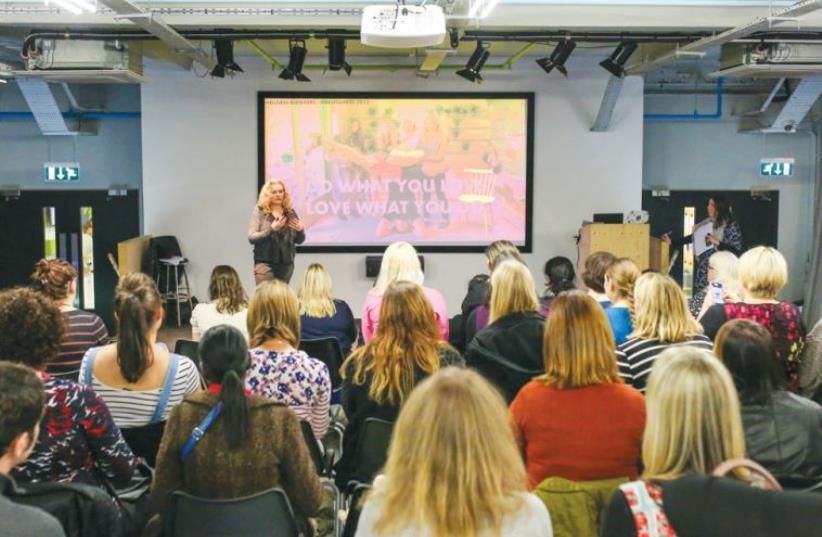 VIBE ISRAEL CEO Joanna Landau addresses the BlogCamp London on Thursday
(photo credit: ORI RONIT)
Advertisement
Israeli entrepreneurs from a variety of start-ups were the recipients of a rapturous reception at a blogging event held in London.The event on Thursday was sponsored by Vibe Israel, an organization that arranges talks and tours for bloggers around the world, in which they are able to visit Israel and gain insights into various aspects of the nation.The event, BlogCamp, was put on by UK blogging network Tots100, a leading community for parental bloggers with around 10,000 members. It marks the first time that Vibe Israel has gone beyond its usual internal remit and visited another country in order to promote Israel.Vibe Israel, established in 2010 originally under the name Kinetis, sets out to promote Israel through working with bloggers around the world. Focusing not on the conflict-based stereotypes surrounding the country, but on its cultural and technological abilities, the event on Thursday marked a first for the company, as it brought over several founders and key players from start-ups across Israel to talk on a wide-range of subjects.Speakers at the event included Liat Mordechay Hertanu (co-creator of the “personal assistant in your pocket” app 24me), Itay Erel (CTO and co-founder of online gift voucher marketplace Zeek), and Jon Sumoy (CEO and inventor of Mifold, a compact booster seat).For VIBE Israel’s CEO, Joanna Landau, their aim is to present an Israel not based in stereotypes of conflict, but as a nation that has a huge amount to offer in a wide-range of sectors. In her view, “marketing and branding Israel gets you a completely different audience, one that does not necessarily have an opinion but is interested to learn more about its different commercial communities.”Though held in the shadow of the current wave of terrorism, the premise of the talks given at the event was not to discuss the politics of Israel, but simply to show the thoughts and ideas coming out of the country.Commenting on the event, Lindy DeMelo, blogs coordinator at Tots100’s parent company Flea Enterprises, said, “The event went really well. The talks given were inspirational to say the least. For the bloggers attending, it was great to see the entrepreneurial spirit of the Israeli speakers.”