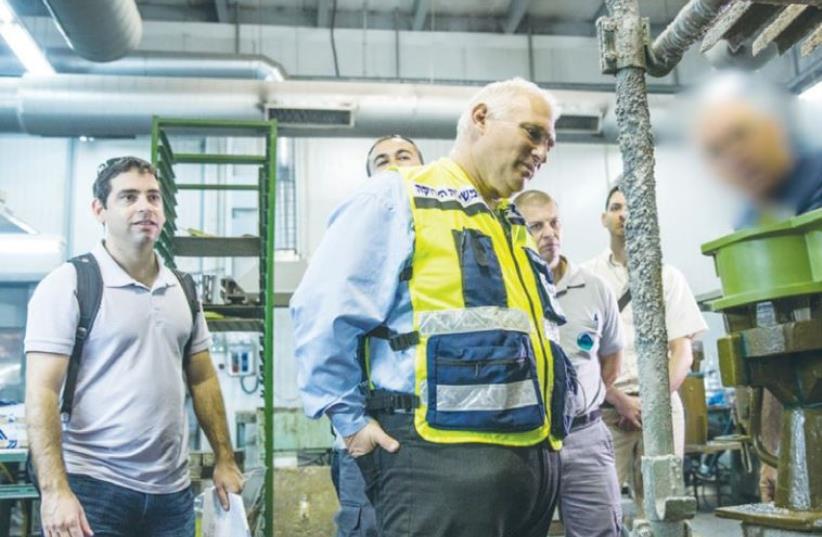 INSPECTORS EXAMINE a factory in the Haifa Bay area.
(photo credit: ENVIRONMENT PROTECTION MINISTRY)
Advertisement
For all those questioning what's being done to fix pollution in Haifa, look no further than the Environmental Protection Agency's quarterly report. It's an update on how the government has been carrying out the plan to cut air pollution in the Haifa Bay area.It is the second report to be released since the NIS 330 million, five-year program began last August.The ministry said it had tightened the supervision of factories in the region, and stepped up demands. As part of this, 317 inspections of 37 factory chimneys, and 25 general inspections were made, of which one-third were unannounced. Three factories had surprise inspections to check emissions, and five factories had to go through an “enforcement process.”Since the beginning of the plan, standards for 21 out of 26 factories were made stricter, the ministry said. As far as transportation emissions, which the ministry has said are a major source of Haifa’s air pollution, the city has been home to the first-of-its-kind “clean air zones.”These zones are comprised of streets close to residential areas on which cargo trucks cannot drive during peak hours, resulting in a 67 percent drop in trucks driving on those roads during peak hours despite the ban. The report, however, showed a 50% increase in the number of trucks using the Haifa tunnel instead.In an effort to fight pollution from vehicles, the ministry reported that it took 63 vehicles off the road in the last quarter, installed fuel emission filtration systems at 91 of the 97 gas stations in the bay area and also are in the process of accepting bids for a NIS 11m. tender for filters on diesel vehicles. Fuel emission filtration systems have been installed at 91 out of 97 gas stations in the area.At the notoriously-polluted Kishon River, 20,000 cu.m. worth of polluted soil were cleaned.One very controversial item in the report was regarding Haifa’s ammonia facility. The report said that the plant is expected to close in May 2016 and that in the past quarter, they have held meetings with government officials to figure out which firm will be awarded with the tender to build a new facility in the Mishor Rotem region of the Negev. In 2012, the state decided to move the 17,000-ton ammonia facility to the south and the Environmental Protection Ministry was directed to build a plant in an unpopulated part of the Negev by 2017. Those plans have since been seriously delayed. The plant and other factories in Haifa have been blamed for pollution that preliminary results of a leaked University of Haifa study said potentially caused babies to be born with heads 20 to 30 percent smaller than average.Ronen Bodoni, director of environmental NGO Zalul, said that the ministry’s “stubbornness” to move the controversial ammonia facility out of Haifa and to the south has wasted time and endangered the lives of Haifa residents.He said that due to the situation, his organization is planning to file a case with the High Court to force the state to give up its tender to build the new ammonia plant. He called on the Knesset to hold an emergency session on the matter and move forward with plans to build the new plant. He also called on Prime Minister Benjamin Netanyahu to get involved in the matter, and close the Haifa facility.Dr. Revital Goldschmidt, who heads the Haifa branch of student environmental NGO Green Course, accused the ministry of carrying out a “green-washing” campaign with their report. She said that the activities that the ministry highlighted as part of their national program should have already been standard enforcement procedures from the authority responsible for managing pollution.By focusing on transportation pollution, she said, the ministry “chose once again not to step out of their comfort zone and has dealt with the driving community rather than the real source of pollution: industrialists and tycoons that run the factories poisoning the residents of the Haifa bay.”Green Course called on Environmental Protection Minister Avi Gabbay to officially declare Haifa as an area suffering from high air pollution and to replace the area’s factories with cleantech industry and renewable energy.MK Yael Cohen Paran was one of the few with a positive take on the report. “I welcome the ministry’s first step in taking responsibility for the issues with which it has been entrusted,” she said. Still, she lamented that they are only taking the most basic actions to deal with the situation. Cohen Paran urged the ministry to take emergency actions to save the Haifa bay.