According to Nili Avni-Magen, zoological director and head veterinarian for the Jerusalem Biblical Zoo, a similar incident would not have occurred at the Jerusalem zoo. 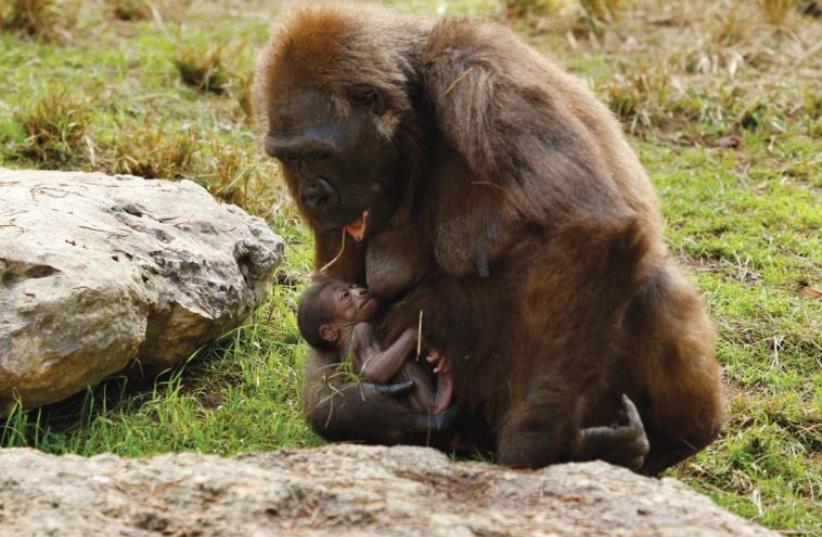 A LOWLAND GORILLA named Lea breast-feeds her two-day-old baby in 2008 at the Ramat Gan Safari
(photo credit: GILI COHEN MAGEN/REUTERS)
Advertisement
Following the global outcry last week after a four-year-old boy entered a gorilla enclosure at the Cincinnati Zoo – resulting in the 400-pound gorilla being shot dead – many are wondering what safety procedures are in place at Israel’s zoos.According to Nili Avni-Magen, zoological director and head veterinarian for the Jerusalem Biblical Zoo, a similar incident would not have occurred at the Jerusalem zoo, on account of its well-trained and attentive staff and good barriers.Speaking to The Jerusalem Post on Wednesday, Avni-Magen pointed out that the type of barrier in the Cincinnati incident includes a large patch of ground between visitors and the animals. Though the distance is long, it is still walkable, she said.Though the type of enclosure depends on the type of animal, she said that a similar incident would be next to impossible here. For example, at the zoo’s lion exhibit, Avni-Magen explained that the barrier consists of a fence, a high wall and a water barrier similar to a moat. “It’s not completely closed but it’s extremely difficult to cross,” she said. Meanwhile, the tiger exhibit has a strong net barrier. Other animal exhibits are completely enclosed and visitors can only view the animals through windows.Furthermore, she said that staff are trained to look out for people climbing on fences or barriers.They are prepared to remove them from the exhibit if necessary.“When it’s very busy, there is a [staff member] at every exhibit,” she told the Post.In some instances where animals do not pose harm to humans, such as in the lemur area, visitors are allowed to walk through the exhibit, very close to the lemurs. Still, a staff member remains present.When asked what recommendations she would give to zoo visitors, Avni-Magen summed it up rather succinctly: “Just as in a museum, you wouldn’t touch a Picasso, visitors are expected to follow the same rules here.”Reuters contributed to this report.