Between April and June, the ministry gave itself a pat on the back for making efforts to cut emissions from factories and vehicles. 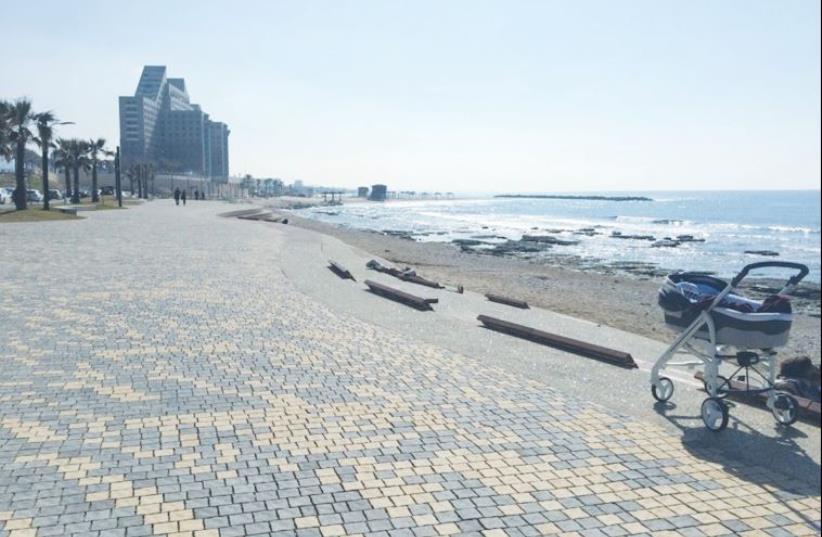 A STROLLER sits on the boardwalk in Haifa. An official report is due months after a leaked portion showed that babies born in the city had smaller heads than average.
(photo credit: MICHELLE MALKA GROSSMAN)
Advertisement
In a day already plagued by an oil spill, the Environmental Protection Ministry released its sunny quarterly Haifa pollution report showing a number of positive advances for the city.Between April and June, the ministry gave itself a pat on the back for making efforts to cut emissions from factories and vehicles.The regular reports are part of the ministry’s master plan to reduce air pollution in the Haifa Bay, which went into effect in August 2015.A large part of the plan calls for placing stricter enforcement on petrochemical factories. In the past quarter, the report said, the ministry carried out 341 unannounced factory inspections of smokestacks, 24 scheduled inspections and unannounced emission inspections at 10 factories.While the report did not discuss the change in air pollution levels compared to the previous quarter, it did note that factory emission levels were down between 58 percent to 90% compared with figures from 2009, depending on the pollutant type being measured.A large part of the plan, and public outcry, regards putting stricter enforcement on petrochemical factories in the region.In the past quarter, the report said, the ministry carried out 341 unannounced factory inspections, which included smokestack and emission checks.The report also noted that the ministry had finally decided on a number of emission guidelines for 25 Haifa Bay factories to follow.Regarding specific factories, the ministry said that it had placed stricter enforcement this quarter on Bazan Group’s Carmel Olefins Ltd. factory, which was reported to be releasing polluting emissions. Following public deliberations, the Ministry issued an order to the factory to fix a number of shortcomings or face closure. If the plant were to close, it would “cut out over 200 tons of organic volatile pollutants,” according to the report.Another huge quarterly achievement includes finally moving ahead on promises to close down the area’s ammonia production and storage facilities.As far as transportation pollution, which the ministry’s officials have often said are the leading source of air pollution, the past quarter saw moves made to cut the amount of vehicles in the Haifa area. They approved NIS 800,000 to build 2,300 bike racks in 50 spots in Kiryat Yam, north of Haifa. Throughout Haifa itself, the ministry approved a NIS 1 million initiative to create “clean air zones” where diesel- powered vehicles or large trucks would be forbidden form driving during certain times of the day.The ministry also published tenders for the purchase of fleets of garbage trucks and buses powered by either natural gas or electricity. At gas stations, 28 inspections were carried out in the past quarter.Noticeably missing from the report was mention of a study that found a link between air pollution in the region and increased rate of diseases and birth defects in infants.