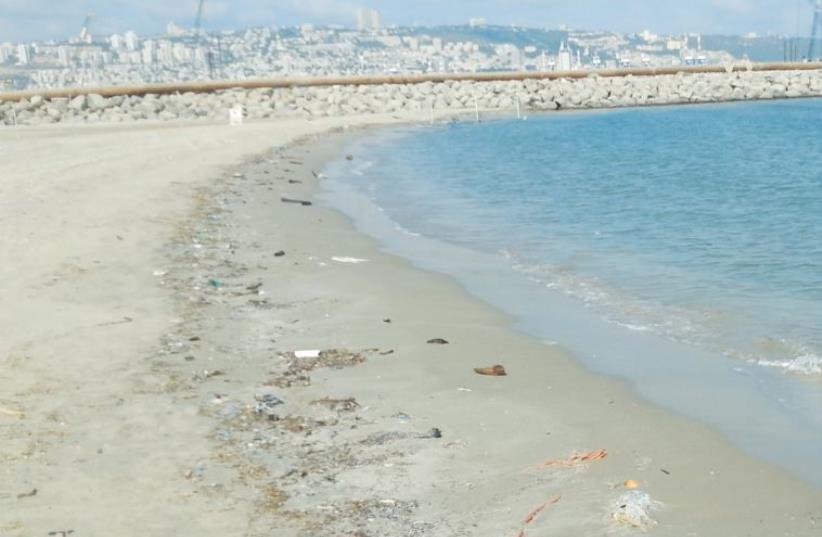 KIRYAT HAIM BEACH, north of Haifa, is seen on July 14. In the survey conducted a few days earlier, it was ranked among the cleanest in the country.
(photo credit: YAEL SHAI/ENVIRONMENT MINISTRY)
Advertisement
Some 62.1 percent of the country’s beaches are “clean” or “very clean,” according to the Environmental Protection Ministry’s July Clean Beach Index released on Thursday.The beaches were checked between July 8 and 10 by 66 ministry officials, who took into account factors such as cleanliness, marine litter monitoring, enforcement, education and signage.This was an improvement from the May rankings when only 37 percent of the country’s beaches were ranked as “clean” or “very clean.”Among the cleanest were the Haifa-area Kiryat Yam and Kiryat Haim beaches, Ma’agen Michael Beach near Zichron Ya’acov, Tel Aviv’s Tzuk and Tel Baruch beaches, Palmahim Beach south of Rishon Lezion, Nitzanim Beach between Ashkelon and Ashdod, Eilat’s Migdalor Beach, Caesarea’s Aqueduct Beach and Jisr e-Zarka Beach north of Caesarea.The country’s dirtiest beach was Gan Raveh Beach, 200 meters south of Tel Yavne, which was the only one ranked as “very dirty,” while other dirty beaches included Achziv Beach just south of the Lebanese border, Central Nahariya Beach, Shavei Tzion Beach between Acre and Nahariya, Atlit Beach south of Haifa and nearby Neveh Yam Beach.Jisr e-Zarka saw a complete turnaround in the past two months: in May, it was ranked among the country’s dirtiest.Water quality was not considered in the rankings, and some of the cleanest beaches have suffered from water pollution in recent months. For example, an oil spill took place near Kiryat Haim Beach on July 5 – just three days before this survey was conducted – with beachgoers told to stay away from the seaside for safety reasons. In March, swimmers at Palmahim Beach complained of hoarse throats and dry eyes, with some having to seek medical treatment, after swimming in water contaminated with gray (recycled) water, due to a malfunction at a water treatment plant.Municipalities are responsible for their city’s coastal cleanliness, though the Environmental Protection Ministry budgeted NIS 2.3 million for its Clean Beach program. The initiative began in 2015, to improve cleanliness at beaches along the Mediterranean Sea and in Eilat. Cities that asked to be part of the program get twice-weekly funding toward beach maintenance