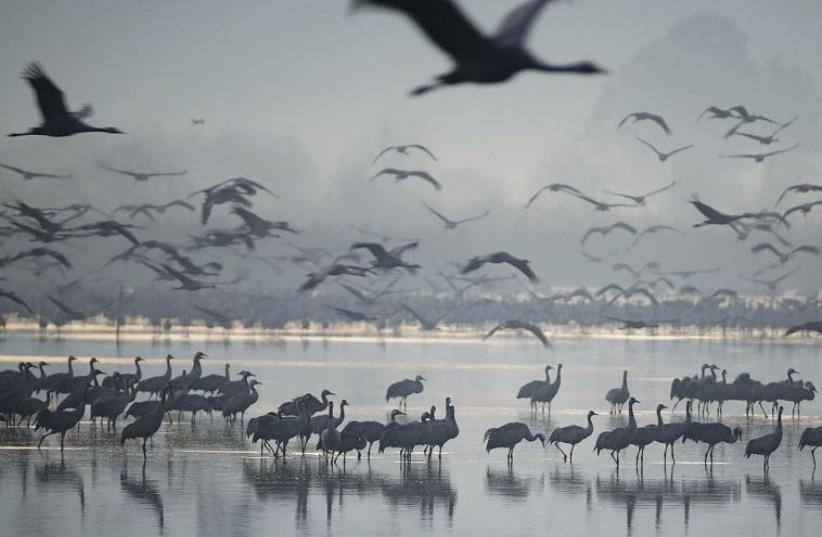 MIGRATING CRANES flock to the Hula Lake Ornithology and Nature Park on Sunday.
(photo credit: REUTERS)
Advertisement
Generally, Israel loves having tourists, but in the case of birds migrating, the situation warrants mixed feelings.For many years, Israel has been a migration corridor for millions of birds heading from Europe and Asia to Africa for the winter, with most of the birds stopping to take a rest in the Negev.However, in the past 15 years, more and more birds, including the common crane (grus grus in Latin), stopped making their full journey and instead decided to winter in Israel, feeding off of the region’s crops – to the ire of farmers but to the delight of birdwatchers, as the site has become one of the top 10 birdwatching spots in the world due to the impact of government decisions, global warming and regional turmoil.To gain insight into the area’s birding phenomenon and its challenges as well, KKL-JNF sponsored a birdwatching tour on Sunday at the Agmon Hahula Nature Reserve, focusing on the common crane. On this particular day, the reserve was filled with tourists, schoolchildren, families and teens – including a cheeky couple smooching among the trees.According to Aviram Zuk, KKL-JNF’s forest supervisor for the Upper Galilee and Golan Heights region, up until 1952 the Hula valley was covered with swampland and a lake. From 1952 to 1956, the area was drained for human habitation and agricultural cultivation, and its water were diverted down to the Kinneret, bringing the valley’s minerals down with it. As the years wore on, problems arose from this drainage.The main problem was that the high amount of minerals allowed toxic blue-green algae to bloom, putting the country’s only freshwater source of water at risk.Something had to be done, and in the 1995, a new plan was instituted to restore the Kinneret. As part of the process, the valley was partially re-flooded, creating the Hula Lake, and waters stopped draining directly into the Kinneret, instead being rerouted to reservoirs.At the same time, the area’s agriculture switched over from the traditional wheat and cotton to food crops such as corn, peanuts and chickpeas, and with the new Lake Hula, migrating birds had a lovely northern resting spot along their journey.This migration shift was especially noticeable with the cranes, for whom it became harder to make their full journey as the desert grew an extra 1,000 kilometers in length in Africa, due partly to drainage trends throughout the region and worsened by political turmoil in north Africa that led to increased desertification.This was coupled with rising temperatures, which have allowed birds to progressively spend their winters in more northern locales. According to Shai Agmon, a guide and “bird bander” at the site, each generation of cranes learns its migrations patterns from its parents, and subsequent generations have learned to call the Hula Valley their winter home.Though birdwatchers were delighted, Zuk said the farmers were fed up with their crops being devoured. In came the “crane project,” which injected between NIS 2.5 million and NIS 3 million to shoo away the cranes from crops and attract them to stay at Lake Hula by providing food.The project proved successful for agriculture and birds alike. The area is now the winter home of 40,000 cranes, out of the 120,000 total that fly over the area during their migration to Africa, beginning around September, and back home to Europe or Asia, around March.Along with the cranes, there are now 350 species of birds that stop in the Galilee during their migration, including ducks, pink flamingos and rainbow-colored Glossy Ibis, and an estimated one billion birds continue to fly over the region during every migration season.Zuk hopes that in the coming years, less money will have to be spent on keeping birds away from crops and wishes fewer birds stopped in the region, saying the average person “can’t tell the difference between 5,000 and 40,000 birds. Still, a visitor’s center is in the works for them.Israel can’t stop the desertification and rising temperatures in the region, so for now, the KKL-JNF and farmers themselves will have to continue to invest their resources and ingenuity into providing a temporary winter home for their feathered friends.