US and Israel to expand energy, water ties amid gas deal shakeup

The agreement, which would be in effect until 2024, encouraged further bilateral collaboration on "smart" network technologies and electricity networks in general. 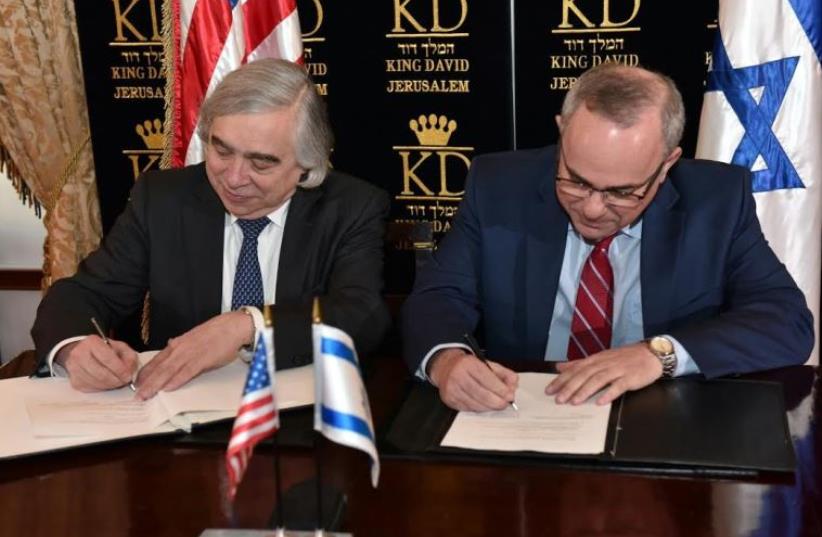 US Energy Secretary Ernest Moniz and Energy, Infrastructure and Water Resources Minister Yuval Steinitz
(photo credit: COURTESY NATIONAL INFRASTRUCTURES, ENERGY AND WATER MINISTERY)
Advertisement
US Energy Secretary Ernest Moniz and Energy, Infrastructure and Water Resources Minister Yuval Steinitz signed an agreement in Jerusalem on Monday that will strengthen and increase the scope of cooperation between the two countries on issues such as natural gas, oil, water and defense of the networks involved.Part of the agreement, which is in effect until 2024, widens the fields in which Israel and the US will cooperate, including regarding oil and its alternatives, such as natural gas, though details were kept sparse. It also encourages further bilateral collaboration on “smart” network technologies and electricity networks, in general.Moving past energy, ties will be strengthened in the field of desalination and water treatment, as well ways to protect water and energy networks from physical and cyber threats.According to the ministry, the agreement also encourages work between Israeli energy researchers and top researchers from the US, part of the funding for which would come from the Binational Industrial Research and Development (BIRD) foundation and the United States-Israel Binational Science Foundation (BSF).“I am convinced that energy cooperation is going to broaden in the coming years,” Steinitz said, as he thanked Moniz for his cooperation and friendship. He called the agreement further proof of the warm ties between the two nations.Moniz, who is in Israel for the first time, will speak Tuesday at the 8th annual Conference of the National Committee for Energy in Tel Aviv.His visit comes a week after the High Court struck down a section of the natural-gas framework, putting a temporary pause on development of the Leviathan natural gas field. Almost 40 percent of the off-shore reservoir is owned by Houston,Texas- based Noble Energy Inc.Earlier in the day, Delek Drilling CEO Yossi Abu reiterated that natural gas will begin flowing from Leviathan by the beginning of 2019, despite the High Court’s ruling.Abu said NIS 4 billion has been invested in developing Leviathan by the consortium of energy companies involved thus far, mostly for exploratory purposes, and that a further NIS 5b. or NIS 6b. will be needed to fully develop the reservoir.Noble Energy owns a 39.66 percent stake in Leviathan, while Delek Group subsidiaries Delek Drilling and Avner Oil Exploration – each hold 22.67% and Ratio Oil Exploration owns a 15% share.