Weather Roundup: Cold and rainy in an unusually dry winter

The rain is expected to keep falling across the country through Monday, but most of the skies could dry up by the evening hours. 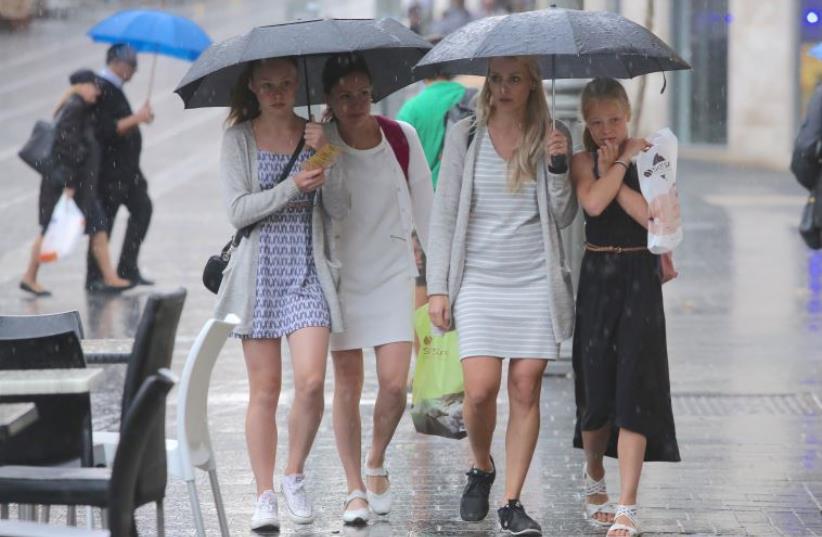 Rain in Jerusalem
(photo credit: MARC ISRAEL SELLEM/THE JERUSALEM POST)
Advertisement
Anyone who lives above ground already knows: Rain returned over the weekend and ended a week of unusually warm winter weather.Rain is expected to continue across the country on Monday, but end in most areas by the evening, Alissa Razy, a forecaster with the Israel Meteorological Service, said on Sunday.There is still a risk of flash floods in small wadis and riverbeds in the South and in the Judean Desert, but the current weather system is already weakening, she said.Tuesday is expected to be warmer and mostly dry, but showers will likely start up again on Wednesday due to a Red Sea trough system, which is “one of the most unpredictable systems Israel gets,” Razy said. This system could bring thunderstorms and it is not yet known which part of the country it will hit.Mount Hermon is likely to remain the coldest place in Israel, as temperatures there dropped below freezing over the weekend. The ski resort there reported that between 15 and 20 centimeters of snow fell in different parts of Mount Hermon between Saturday and Sunday.Meanwhile, the rest of the North was awash in 60-80 millimeters of rain. The Kinneret (Sea of Galilee) has risen by 2.5 centimeters since Thursday, but is still 3.97 meters short of full capacity.The central part of the country received 30 mm. of rain in recent days, and although temperatures in the Tel Aviv area are expected to see highs of 16 and 18 degrees, showers could return as the week marches on.Despite the wet weather, the Water Authority said that this is the third dry winter in a row, with the North receiving much less precipitation than usual. Since the beginning of the season, the Kinneret has risen by only 24 cm., 12 percent of the average for this time of year. This year has seen some of the lowest amounts of precipitation at the Kinneret in the past 90 years, with only the 2007-2008 winter being drier, the authority said.While the North has had around 430 mm. of rain so far, there is usually 550 mm. of rain there by the end of January.The authority predicted that by the end of the rainy season, bodies of water in the North will only have half the amount of water that is usual for the time of year.The authority also reported that the Dead Sea’s water levels went down 7 cm. during January and 38 cm. since October.