The Israel Meteorological Service expects local showers and thunderstorms to continue throughout Thursday from the North to the Negev. 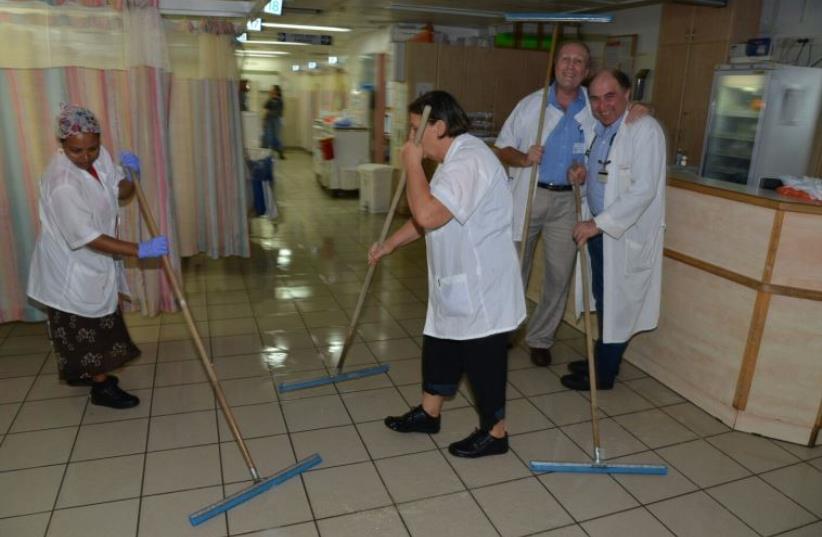 Flooded Barzilai Medical Center in Ashkelon, November 9, 2015
(photo credit: DAVID AVIOUZ, BARZILAI MEDICAL CENTER)
Advertisement
After a pleasant and warm week, winter weather returned to Israel on Thursday and the storm could even bring snow to Mount Hermon. Heavy rain caused flooding in Ashkelon, penetrating Barzilai Medical Center in the city. Services at the hospital remained undisturbed despite the flooding as staff were working to minimize the damage.The Israel Meteorological Service expects local showers and thunderstorms to continue throughout Thursday from the North to the Negev. Temperatures are expected to drop and a flood warning has been issued for the Judean Desert and the Dead Sea. Thursday night was forecast to be partly cloudy with local showers, mainly along the coastal plain.Thursday's flooding at Barzilai Medical Center did not mark the first such instance. Last month, a short but heavy dose of rainfall in Ashkelon caused flooding to almost all of the hospital's departments. The hospital said that despite the flooding, no treatment to patients was disturbed and vital life-saving medical equipment continued to work.Thursday's forecast calls for temperatures of 10-23 degrees Celsius in Eilat, 6-14 in Mitzpe Ramon, 7-18 in Beersheba, 7-13 in Jerusalem, 12-17 in Ashdod, 12-17 in Tel Aviv and 11-16 in Haifa.Friday was expected to be partly cloudy with no significant change in temperature and possible snowfall on Mount Hermon. Saturday will be partly cloudy as well and local rainfall could return on Sunday morning.