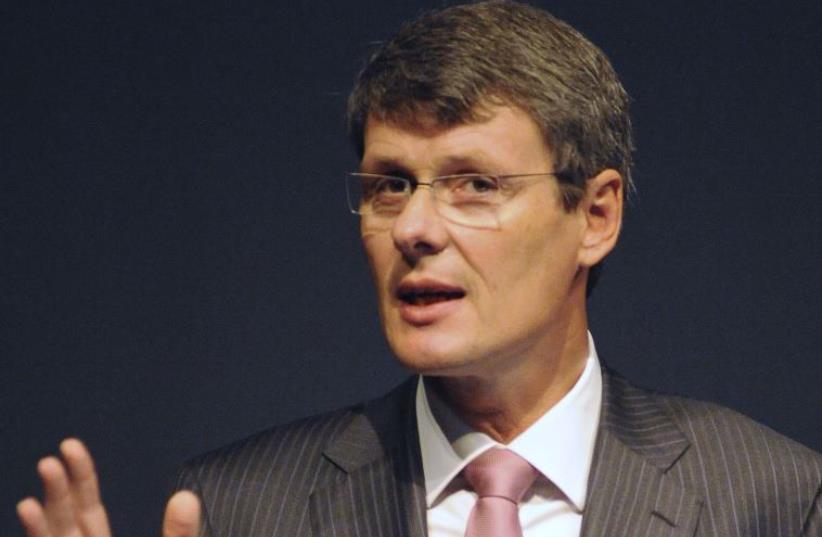 Powermat CEO Thorsten Heins
(photo credit: REUTERS/JON BLACKER)
Advertisement
Powermat Technologies CEO Thorsten Heins, best known for his failed attempt to turn around Blackberry as CEO from 2012 to 2013, will leave the position, The Jerusalem Post has learned.Heins’s ouster results from a lawsuit that three board members – including the company’s founder and former CEO and chairman Ran Poliakine – filed against the Neveh Ilan-based company and Heins in October.The lawsuit alleged that Heins was running the company without an approved budget, and tanking it financially in the process.On Sunday morning, the sides filed a mediation case in the Tel Aviv District Court reflecting an agreement that Heins will leave the position, a CEO search committee will be set up, the board will restructure, and that investors, which include Goldman Sachs, will invest an addition $10 million into the company in the form of bridge loans. Shareholders saw Heins as overspending, lacking strategic vision, and failing to seal new deals for the company.Heins came on as CEO of Powermat, an Israeli company whose wireless charging product has been adopted by clients including Starbucks, General Motors, Samsung, Proctor & Gamble, and AT&T, at the behest of investors Goldman Sachs and Hudson Clean Energy Partners in late 2014. His appointment followed pressure from another investor, Chris Bruch, alleging that Poliakine was running the company for his own benefit, according to Bloomberg.Though all sides have agreed to the new terms, it still needs to be finalized legally in roughly two weeks.“I think more than anything else it means that Powermat is back on track,” Poliakine told the Post. “We’re very pleased to say that all shareholders realized that this was not the right path for the company.”In recent weeks, the company has announced several achievements. Last week, the company said it had racked up 150 million minutes of wireless charging. Earlier in the month, it announced that Samsung would embed its wireless charging technology directly into its Galaxy s6 and future phones.“We’re doing to power what Wi-Fi did to data,” Poliakine said, adding that he was relieved that “we made peace with Goldman.”With new leadership and cooperation, he added, “the company can become another Teva, another Mobileye.”The other board members involved in the lawsuit were Roman Ferber and Dror Boulkind. The new board will have seven directors, down from nine, and be composed of two nominees from the owners (Poliakine, Ferber, Boulkind and Richard Stone), two from the investors (Goldman and Hudson), and three independent members.Click here for updates on this story.